When I was writing the previous blogpost about giving a taster lecture to the new students I ended up on a bit of a tangent. When I talk with Brits we often end up discussing the different approaches to it in the two countries. In the UK, both primary and secondary school are a one-size-fits all; the only difference between one school and the next is basically how well-equipped they are in teaching this generic education sausage. And that's where class society comes in: you have places like Eton and Harrows for the upper class, schools with sports fields and music facilities and extra support for those with special needs and all such stuff for the middle class and whatever's left for the working class. And of course things have become a bit less black-and-white than this but I suppose in essence it's still true. And parents will go to great lengths to ensure their kids can go to a good (read: middle class) school.

At the end of your secondary education you do your A levels and these determine what university you can get into. Universities decide what grades they demand for letting students in. Aim too high and you won't get many; aim too low and only those who won't get accepted anywhere else will come to you. It's a strange game.

I like the Dutch system much, much better; at around 12 you choose what direction you want your life to go into. Do you want to be a farmer, surgeon, accountant, engineer? Then you choose the education that fits that. And there, of course, are also routes you can take that allow you to postpone the decision for a bit. But between 12 and 16 to18 you get tailored education; both regarding content and level. Brings out the best of each youngster! And if you have chosen to go the university route the only thing you need to do is get yourself a diploma from the academic-style secondary school you've gone to and Bob's your uncle. Mind what subjects you choose though; some university programs require you do e.g. maths or chemistry. But once that's sorted you're on your way! 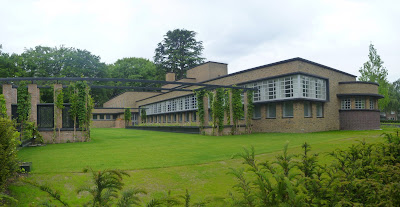 My old school (not a school anymore)


I think the Dutch system both allows everyone to develop their skills in an efficient way, which not only is rather effective but also keeps people motivated; if you force your, say, future linguist and software engineer to do the very same education all the way up to the age of 18 you get very frustrated and badly educated professionals I think. And as your A levels mean to much for your further career there is a lot of pressure on rather young people. When you're young you might be rather busy figuring yourself out; there should be space for that! So I am very happy I was educated in the Netherlands. Will the Brits ever come to agree with me to such an extent they change their system? Time will tell...


PS Did I ever mention I also think Dutch language education is far superior to the British version? Oh did I? How unexpected...
Posted by Margot at 09:25