After our adventures hiking from a base camp we only had the tail end of the trip left; we would spend two nights in the hostel in Kulusuk. These days were intended as a buffer; if, for instance, the fjord would be too full of ice to have us ferried back on the intended day, we still had two more days of waiting for the ice to vanish before we’d miss our flight. We wouldn’t need them; we would just have two mosquito-free evenings this way. That was welcome; I was suffering still from my ill-advised bath!

The views during the boat trip trip were lovely as usual. We suffered one incident; at one point, suddenly smoke seemed to burst out of the spare engine. The spare? We weren’t using it! Then I realised Robert had accidentally set off the fire extinguisher. Oh dear! Where would you have your extinguisher refilled in East Greenland?

Without further incidents we got to Kulusuk, and went to the hostel. I then bought more beer (a very alcoholic holiday) before the shop would close. The hostel also contained a Finnish woman and an Austrian man, who were both travelling alone. They would only stay one night.
Then the great showering started. I had had regular baths, but most of us hadn’t bothered, and were rather keen to set that right with the help of the available hot shower. Not something to take for granted! We all got our rather neglected books out, and the paperwork for our upcoming travels. It was a calm evening. 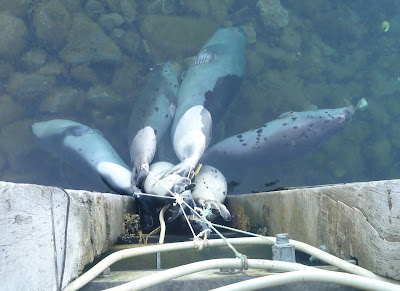 Someone had strung his catch from the Kulusuk quay

Staying in a hostel was a bit of a culture shock. I loved the absence of mosquitoes, but I missed the shitting in the wild. Kulusuk doesn’t have sewers; the toilets are equipped with sturdy plastic bags. You just shit and pee in the bag until it is full; then you take it out, tie it off, and plonk it by the roadside. Once in a while a chap with a digger comes buy and gathers all the bags in the scoop of the digger. It seems he then drives to the garbage heap, stands on top of a cliff, slashes all the bags, and thus fertilises the sea. The bags are probably burned; Kulusuk burns its waste. And the ash doesn’t go to waste; on our earlier wanderings we had come across massive letters in the snow near the garbage dump. A woman had come out of her house to explain she had made that; it had taken her 100 days to write “love” in Kalaallitut in the snow with the ashes from the incinerator. When we would take off later we would get a better view of her artwork. She was certainly dedicated! 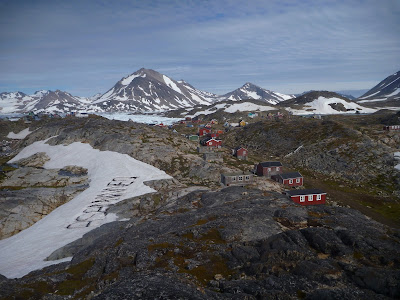 Sleeping in a building with all of us in one room was also hot and noisy. The later was sorted by ear plugs, but the former bothered me a bit. But villages also mean: puppies! There were tiny ones at the next house, and there was a big one hanging around the hostel, and rather keen on petting when I would step out for brushing my teeth.

The last full day would be spent walking to Dye 4 radar station, or rather; what was left of it. In 1991 it was all bulldozered into the sea. Only the foundations were still there. And some new antennas that were put there to take advantage of the good location and the existence of the road. We walked there over the road, along which some machinery, probably used to construct the road, was just left behind. Quarrying stuff! Almost the same as mining stuff! I enjoyed that. But then we walked on; when we reached the shore on the other side we started to see the large concrete platforms that must have once supported the station. 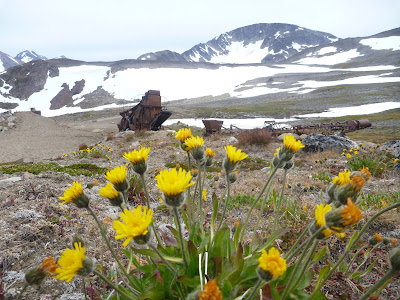 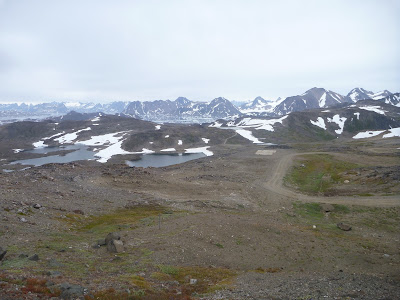 Notice the concrete slab near the road, and notice the road; a rare sight on Greenland!


We admired the view over the Atlantic Ocean, and went back via a more western route. We knew this would be our last venture into the amazing local landscapes! It made it a bit melancholy. But we made sure to enjoy it. Robert hadn't been here before so we made the route up as we went along, and it was rather nice. We didn't take our time, though; we had to buy our dinner and the shop would close at 4PM. We were in good time. Near the shop we bumped into one of the locals working for Robert's organisation; he had access to the key of the local museum. It's not big but we were interested, so het fetched it and we flocked to this epicentre of local culture! It was a private collection of local clothes and artifacts made public. Nice! 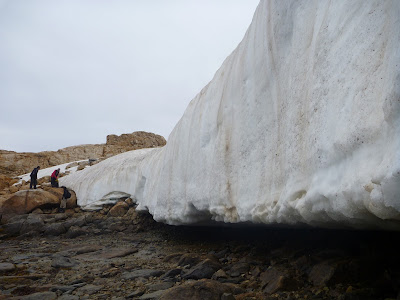 A decorative snow slab we crossed in order to get home


We had a lovely dinner and then we went to bed, the last time on Greenland. The next day we packed all our stuff and walked to the airport. There the great goodbye started! Julia had decided to stay a bit longer on Greenland, so she didn't fly with us. She'd become a great friend, and I'd miss her! We also gave Robert a communal tip. We were all very happy with his work. Then we went through security, acquired geeky stamps in our passports, and boarded the plane. Once having landed in Reykjavik we walked to town. Along the way the next goodbye took place; Robert went home. The rest of us would postpone execution; we'd all spend the evening in town, so I had proposed dinner together. Everybody agreed. We would gather at 5 in the pub I'd been enjoying before the Greenland trip; when at 5.30 the Argentinians hadn't appeared yet we Europeans went to a restaurant. We were hungry! 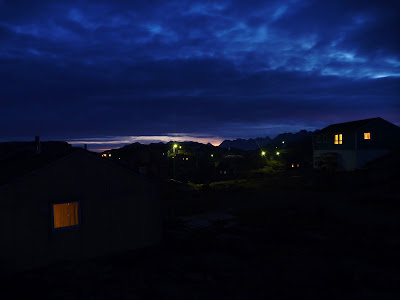 
To our surprise we found the men there; it turned out they had forgot to adjust their watches, and they thought it was 3.30. They had just had lunch! We were a bit offset there. And at the end of the evening the goodbyes were real. It had been a spiffing group on a spiffing trip; I hope all of us look back on it with a great big smile! Thanks Andy, Joaco, Julia, Robert, Ron and Sebastian! Well met! 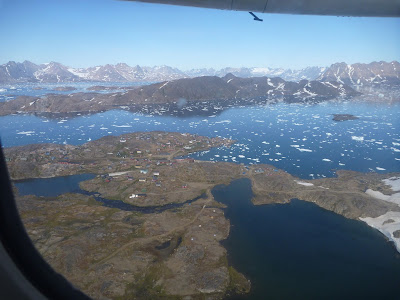