When we left Tunu to establish our second and last basecamp in Tiniteqilaaq we first went on a shopping trip; we revisited Kuummiut and its shop as we needed supplies.  We also needed to try to buy new boots for Joaco, as his hiking boots had fallen apart. When we got there I bought a few more beers; beer is nice! Joaco found only one pair of footwear his size; it was a pair of Italian gumboots. Better than nothing! 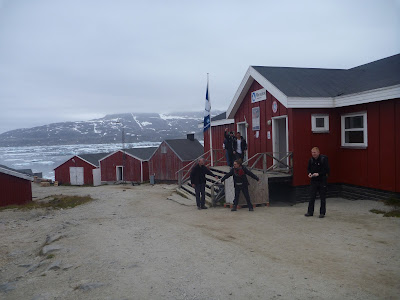 We walked into town for a bit, for a rendez-vous with the puppy we had met earlier. He was glad to see us again. By chance, we got to the dogs when they were about to be fed. An interesting sight! And sound. Dog lunchtime does not go unnoticed in a Greenlandic village. But soon we went back to the boat.

It was rather cold and overcast. Nicely wrapped up in my down jacket and hat, I enjoyed the grim landscapes. But not for too long; this time the fjord was clear, and we could travel at a good speed. Soon we saw the intended camping spot. There were tents there already! Little red tents were dotted over a hill. But the valley was big enough; we landed a bit further up the fjord and started to unload the boat. Soon we had a new camp. This time with water closer by! That saved time when fetching water. We made it a bit of a lazy day. We played a round of football golf (the Argentinians had found a ball) and had a tiny little walk. Later I sat on a hill, enjoyed the view, and did a round of hair maintenance. Later we had dinner, and soon I was in bed. 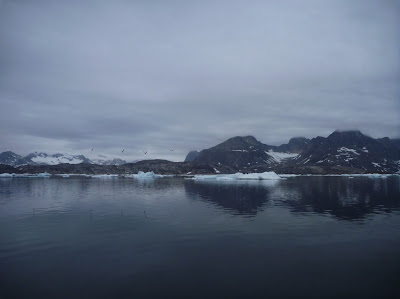 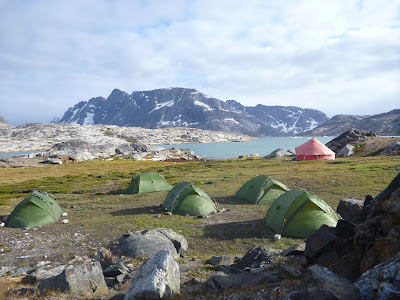 Our new camp in Tiniteqilaaq

The next morning yet another group arrived, pitching yellow tents between us and the other group. Three groups in one fjord! Greenland is getting busy. We went over for a chat; they were French. The group in the red tents was too. Too many French! Later we walked past again when we set off for our walk of the day; to Tiniteqilaaq the village (the entire hill was called Tiniteqilaaq). We started along the shore. It was a bit improvised on this pathless island, but we made good progress. After a while we went further inland, through an amazing valley cut out in pink granite.

When we got the village in sight we were amazed. You couldn’t only see the village, but also the fjord behind it; that was Sermilik Fjord, which means Icy Fjord (one may not be surprised to hear there are many fjords called Sermilik in Greenland) and it deserved its name. And behind the fjord we could see the ice sheet. Lovely! 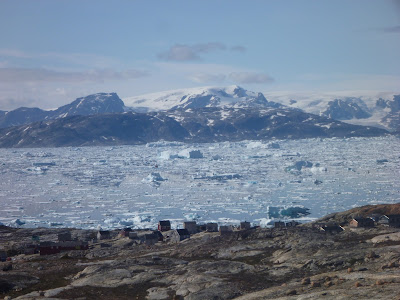 Tiniteqilaaq the village, with Sermilik Fjord behind it, and the ice sheet in the background

We walked into town. I decided to walk down to the waterfront to have a sandwich. Later we went to the supermarket to buy more bread. I had my hair fondled again by some locals; maybe dreadlocks will become fashion in these villages! But we set off again; it was a long walk back.

When we got to the hill above the village a cute puppy, a lot younger than the one we had met in Kuummiut, appeared out of nowhere. He was very cuddly! Everyone was very charmed. He liked us too, and followed us up the hill. After a short while, Robert got concerned. He seemed intent on keeping following us! But what would we do with a dog? You can’t tell a dog to go away, though. Well, you can, but he can ignore it, and what can you do then. Robert knew that violence would be the only way to convince the dog to leave us, but who can hurt a fluffy puppy? Not us, for sure. So it kept following us. We also tried to give it the cold shoulder, but that didn’t help either. And nobody could resist his photogenic properties. Joaco called the dog Sinatra, because he was such a star. 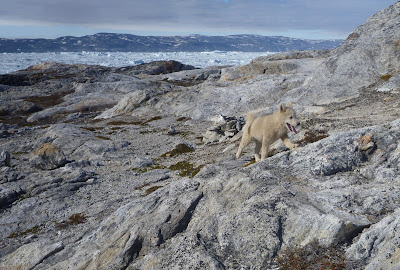 We walked on, not sure of how this would end. But then, suddenly, three people appeared, going the other way. They were three Brits, heading for the village. We suggested they try to lure the dog back. They agreed. And so did the dog. Without hesitation he happily turned around and scampered after them, leaving some of us feeling a bit abandoned. We would spend the rest of the time showing each other cure Sinatra pictures. I think Robert will have something to explain to his little daughter, who will no doubt figure he could have brought the dog home.

We got back to the camp, not even that late. I had a nice bath, and then a beer. Lovely! And dinner was a BBQ; this was initially meant to be our goodbye meal, but Robert was afraid the meat wouldn’t last another day, and he could do without food poisoning on his trip. The meat, expertly cooked on an improvised stone BBQ by Robert, was especially appreciated by the meat-loving Argentinians. And Joaco needed some uplifting food after a day hike on gumboots! And the next day would be worse!

This next day was special: it was Joaco’s birthday. He was showered in congratulations at breakfast. As a birthday present he would get the ascent of the hill on the other side of the fjord. He wasn’t too keen; he did his usual suggesting of let’s not and say we did. But that wouldn’t happen! The trip first involved a river crossing, of which Joaco was disappointed it would overtop his boots. Later we got higher. The views were amazing. Of course they were! When we had Sermilik fjord in view again, Joaco suddenly pulled a football poster celebrating his team’s victory out of his bag, and posed with it. Sebastian pulled out a team shirt and posed along. These Argentinians! 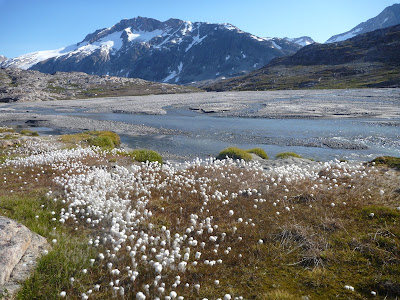 The braided river we crossed

When we got to the top we took some group pictures, and had lunch at a calm spot with amazing views. This was the last proper day of the trip! We were all very aware of it. After a while the “yellow French” appeared, but pretended we weren’t there. Neither of the French groups was very sociable! Oh well. We went back down along a different (and also very pretty) way. And in good time we were back at our camp. I went for another bath, but there wasn’t much wind, and the mosquitoes had free reign. Oh dear.

At dinner we sang for Joaco, and gave him a birthday card; a painting of an iceberg Julia had made. It was beautiful! We also raised a glass. We had plenty of booze still. The perks of the duty free! I partied along until 21.30 as I was tired. 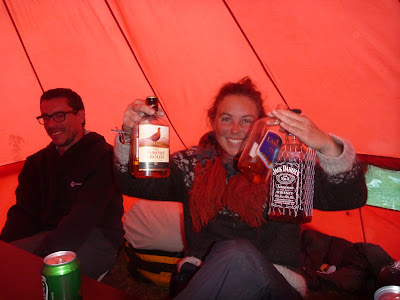 The next morning I had to get out for a leak at 5AM; I had gone to bed too soon after drinking lots of tea. I met Andy, who was about to do another one of his early morning photo scampers. I went back to bed. When I got up again some time later, references were made to all sorts of things I wasn’t aware of. It turned out that soon after me, Andy had gone to bed, but the rest had partied on. They had kept on going until they had finished ALL the booze! That was quite something. So there were tales of people walking into tent poles, struggling to find their tents, struggling to get out of their tent in time to vomit outside, of admiring the Northern Lights while holding a friend’s hair… it had got wild. But everyone was in good spirits (although maybe not terribly hungry at breakfast) and quite able to pack up the camp. The boat would come at 2PM, after having lugged all the French around. But the last French were gone by 10.30. Robert urged us to be ready by 11; no way would ferrying the French take that long! So ready we were. But no boat. And it was a hot, mosquito-infested day. I was quite fed up with the critters; I was feeling the repercussions of my bath the last day. I was completely covered in itchy bites! We hung around a bit, played some more football golf, and saw the boat appear at 2PM sharp. Time to load up again! And time to say goodbye to Tiniteqilaaq! And goodbye to the hinterland. From now on we would live in a village... 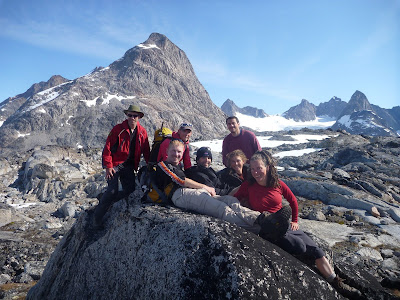 Group pic on top of a hill