Days on Greenland are long in August. On the first morning on this marvellous island I woke up rather early. This would be our first hiking day, featuring a modest route to start subtly. As we had reached our camp rather late the evening before we had gone to bed rather late, so a calm day was a good idea. I decided to start it with a bath. After a lovely breakfast  we set off in the direction of what really was called Tunu. This route took us past a place where at low tide the fjord can be crossed. It happened to be low tide.

Robert decided this was an opportunity we couldn’t let slip, and suggested we do the Tunu trip later, and head for the other side of the fjord now. And so we did. Soon we left the mossy lowland which also hosted blueberries and dwarf trees, and were on bare rock alone. We had a lunch of biscuits and chocolate as we didn’t have bread. The food and kit had been provided by two employees of the mountain guides working from Kulusuk, and not all that was expected was there. There was no bread, no water containers (we would get our water in a pan), and no thermal flasks (we used mine for coffee; I had to swallow a bit to offer my pristine water-only flask of many years to long-smelling coffee invasion). 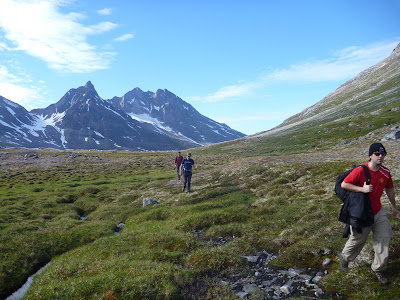 Walking up the green valley


After lunch we went further uphill, from which we had an amazing view over the fjord we had tried to negotiate in vain the day before. We had all the time in the world as we knew we could only cross the fjord again at the next lowish tide. We made sure we made some detours, and then had a look at the water level. Robert scouted ahead; it was too deep still. He wasn’t willing to have us cross at much more than knee deep water. We just had to wait. We were all hungry. We were also longing for the whisky waiting for us at the camp. By 7PM we could cross. Another late arrival! And we weren’t keen on starting dinner immediately: an iceberg had run aground on the beach right next to our kitchen. We surely had to clamber all over that first! Then we had a late dinner, and bed immediately afterwards. A first day over. A good one! 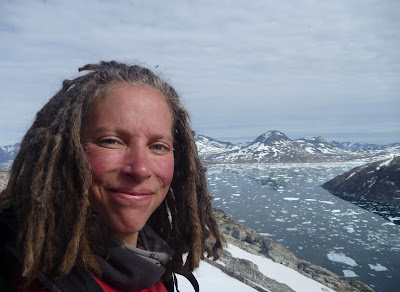 Me happily standing over a somewhat icy fjord

The next day we would climb a reasonably high (1224m) local mountain. The route would take us near the next village up, called Kuummiut. Should we visit that first, or skip it and have more time on the mountain? We put it to the vote. I was quite willing to have one lunch of biscuits, but I have no sweet tooth, so if we had a chance of getting bread I figured we should take it. And that vote won. We went into the village and found the supermarket. It sold bread! And beer. I bought one; I would have loved to have had one the previous day, when we were waiting for the tide. When we came out a local man wanted to fondle my hair. He seemed to only speak Kalaallitut but it was clear what he wanted anyway. We also encountered a dog still young enough to not be chained up; he was rather flirtatious! Sweet. But we headed up the hill. Where after a while we had a bread-festooned lunch break! Lovely!

The walk got more and more spectacular. The rock was riddled with dark intrusions, and the geology was spectacular. After a while we came to a ridge from where you looked straight into the gaping, snarling inside of the Earth. It was breath-taking! I was all excited. But Robert urged us on; time wasn’t waiting and we were not at the top yet. The view from the top was amazing, but it didn’t have the baffling geology. And after the obligatory pics we headed back down. Some of the route went over snow; this is where we first saw speedy Ron in action (almost bowling Sebastian over in his swiftness). We had another break above the village. I had my beer there, in the sun, and with my shoes off. This is the life! But Robert wanted to move on. This time we weren’t even home that late. Time for a proper after-hike shower. The Argentinians had beaten me to it, but they were naked lady proof, so that didn’t stop me. Joaco was trying to wash his hair, so my bath was festooned with intricate swearing. 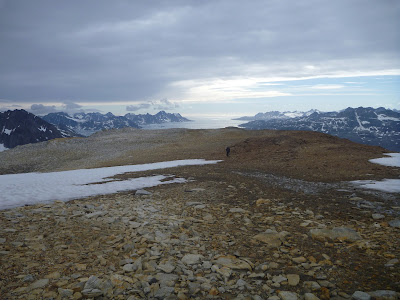 Moon landscape on the way to the top 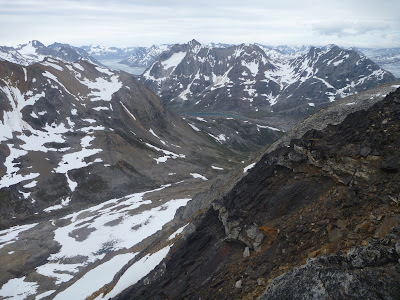 Notice the fresh nearby rock face! 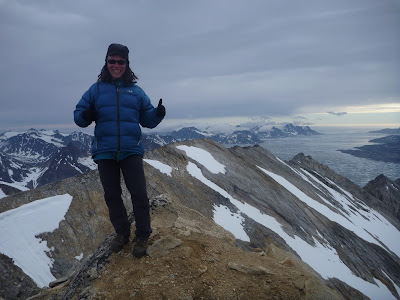 After that bath I was revived. A lovely meal with whisky followed! And bad news: Joaco’s shoe had given up. The sole was falling off. Oh dear! Greenland is not the place to buy good hiking boots.
The next day we would do the mild day we originally had intended for the first day. We walked past the ford again, but headed on this time, to get into the valley around the corner. It was low tide when we got there, and there were many icebergs washed up. We immediately lost Andy, who couldn’t get enough of them. We were headed for a saddle at the end of the valley, but soon after the start of the ascent we lost Joaco (and his shoe which we hadn’t managed to properly repair, not even with dental floss and found rope) too. The rest pottered on. Nice views at the end! Then we went back. We found Joaco back in his trainers, which he had brought for the sake of river crossings. 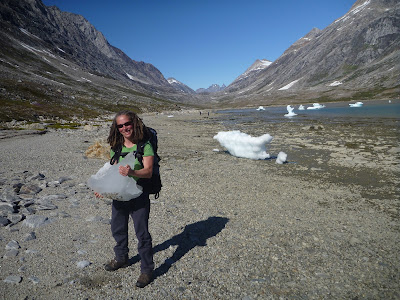 The evening was enlivened by an arctic fox scampering through our camp. We knew they were around; we had seen paw prints, and Robert had already heard one scratching at the tent. But this was the only time we would actually see one.

The next day we packed up our camp. We would move to the next site. We were done rather early, so I seized the opportunity to wash my shirt. It already smelled rather bad! And the boats were punctual. We loaded up again. This time I made sure I wore all my clothes for the transit. It’s cold on the fjords! And then we said goodbye to Tunu. It had been great!
Posted by Margot at 08:56