Once in a while, our Paul brings some Canadian along underground. How this tradition commenced, you may ask? I have no idea. But after bringing an archaeologist along in June the previous year, he now showed up with an engineer. Always nice to show people around that are new to the area! So we decided to take him down our, well, default mine. It's a beauty and caters for all. And when we we being inclusive anyway, Sinker decided to bring his eldest son along. And while we would be at it, we would clean up a staircase. These old stair get clogged up with mud over time, and that's not good. For the pleasure and safety of both ourselves and any other visitors we would attack the caked-on dirt with spades, trowels, and water. And then do a bit of a round trip! 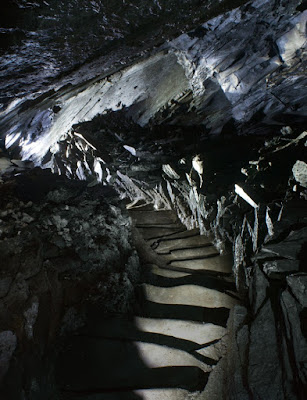 The impeccable steps (Pic by David)

And so we did. We first spent some time on the stairs, which are now spic and span again. Then we did a nice scamper. The two new gentlemen were suitably impressed with the beauty of the mine. And they were quite happy with the challenges it brings (except the Canadian choosing a detour over a high ladder). The Canadian lives a bit far away to join more often, but who knows, maybe we get Sinker Junior along a bit more often now!