From sea to mountain

Everyone comes to North Wales! It's so beautiful. Not only caving clubs come west. This time, it was a lady I knew from very un-mountainous environs that would come visit. It was Elke, who had been on the 2014 cruise. She had worked the core scanner, and I had developed the habit of popping in every day just before her shift (if work allowed, of course) to catch up. That was very nice! And it was very nice to see her again on my home turf!

She stayed in Llandudno, which meant the north-eastern part of Snowdonia was the most logical place to go. That was also the area where I had done my biggest training run, so I had seen how beautiful it was, and I had intended to one day come back and enjoy that area in a slightly more relaxed way.The time was now!

The weather forecast wasn't all that good, but to my surprise I reached Llandudno in sunshine. And there was Elke! It was good to see her again. We drove to a nicely remote parking lot and set off. From that parking lot you could see the broken reservoir dam I had mentioned before. We went the other way, though, as that was new for both of us. 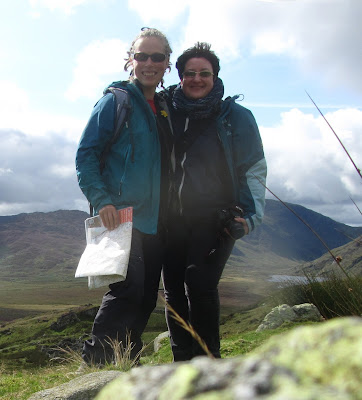 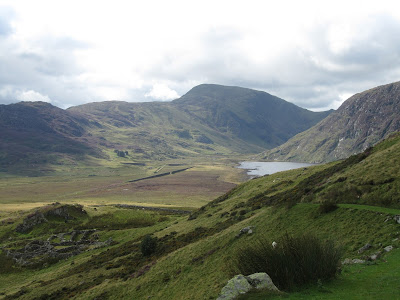 The valley we headed into, Pant y Griafolen, was very beautiful too. There wasn't much in it, other than two small reservoirs and a cabin. And some sheep! And a mill of sorts. There was a small quarry (Melynllyn Hone quarry) at the top end of the valley, and the path had clearly been a tramway. We found a ruined building with a waterwheel pit. The wheel itself was gone (maybe it had been wood) but the axle was still there! 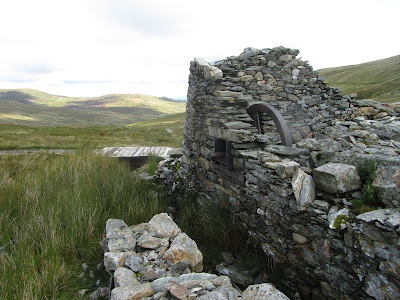 It took a while to slosh back to where we could cross the river. I felt a bit bad as Elke's socks, shoes and trousers were soaking. My shoes weren't so bad. But once we were on solid ground again all was forgiven. The flowering heather and sunshine made up for any slosh.

When we got back to the cars Elke had to travel on to Aberystwyth. I had to go back to my chores. It had been a great half day! Come back again Elke!
Posted by Margot at 09:25