Never let a fresher go. I had not really thought about the consequences of the differences between the Dutch and the UK university admission policies, until I started doing PGCert. But the difference is fundamental; in the Netherlands, everyone is welcome to come to university to study whatever fancies them*, and quite some of those will realise they might not have chosen wisely the first time around. If that is the case, you move on and try something else, either inside or outside university. I think that works rather well; your late teens and early twenties are a fine time to figure out who you actually are.

In the UK, it's different. Your A levels determine what university you can go to study what. The university that takes you on will then want to keep you; they lose a lot of money if they don't. So the pressure is on at the end of secondary school, and once you have your A levels your fate has been pretty much sealed. With a tuition fee of £9000 per year you don't want to have "trial and error" as your guideline; not that you would have as wide a choice. Neither the students not the universities can really afford second chances! So when a new cohort of first year students appears in September they have to be welcomed warmly. We're stuck with each other. The good thing is: they would be as motivated as we are, for the same reason. 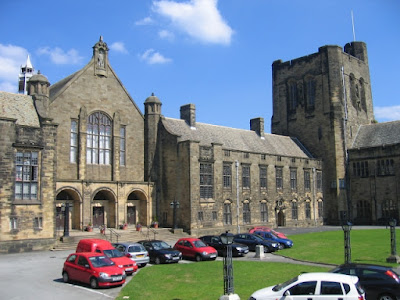 Term starts with "welcome week"; I suppose that's how things are in most places. And Ocean Sciences include a session of taster lectures on the Friday. The organiser, Andy, needed people for that and I volunteered. More teaching experience, and this would be the free-est I'd ever be teaching!

I started to prepare some lecture about how spiffing the ocean was, but then there was a coffee morning for mature students, where one of those mentioned the sheer debauchery that the new students had hurled themselves into. I ditched the lecture. How to keep students entertained who are terminally hungover and who have just endured 1.5 hours of uninterrupted teaching (I would be the last of five?) And as well: how would I fill the shoes of the rather stellar teaching staff preceding me? I knew the two chaps just before me were very impressive. I decided to take some very interesting detail in Earth's climate history, and explain it through the medium of a quiz.

The main question I decided to try to answer with the students was "do the Himalayas cause weight gain in marine micro-organims?" I figured that was a daft enough title to elicit some interest. And it allowed me to elaborate on how everything in the Earth system hangs together. How the Earth's crust influences the atmosphere which influences the oceans and how microfossils document the lot. And I subdivided all into discrete questions I made the students answer by raising their hands.

I think it went well! I got responses! And there was generally a nice number of students that knew (or guessed) the right answer, so it was neither too boring nor too complicated. And I saw some pennies drop in the audience. It wasn't easy to think of something engaging and informative but I'm glad I gave it a try. And I think this will be a fine cohort. Good, because we're now stuck with each other!

* For those unfamiliar with the Dutch university entrance policy (of the nineties): in order to get into university you do, of course, need a qualifying diploma of sorts, but it tends not to matter whether you got top grades or just scraped through, unless you want to do one of the few programs that have a student limit; in my days, that were Dentistry and Medicine. No idea how things are now...
Posted by Margot at 10:28