Suddenly there was a reminder email. Oh dear! I think I missed the original one while I was on the boat or something. Luckily, it related to an activity on a day I didn't have anything specific planned. So what was the email about? A cave rescue training. It was announced to be wet. My favourite kind of fun! Whether in rescue context or not.

I tried to get to bed at a reasonable hour the day before, in spite of the CRTT. And packed a bucket full of neoprene.

When we got to Plas-y-Brenin we were asked to change into our kit, so we did. The team has some dry suits, but not enough for everyone, so I was quite happy to just wetsuit up. Soon we were practicing; the team had a floating stretcher, a float for non-floating stretchers, and an inflatable dinghy that should be good for stretcher transport! So we had people swim off, playing casualties, and the rest then trying to get to them, keep their heads out of the water, and get them into the boat. That worked really well! You get lots of water in too, so maybe we need a bailing scoop as additional kit; your casualty might get cold if they are transported in two inches of water. 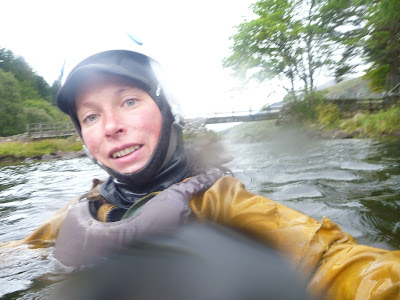 Fun in the water 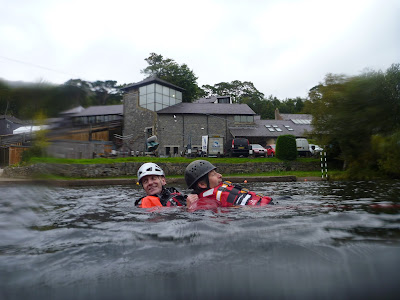 David plays a casualty and is seen to 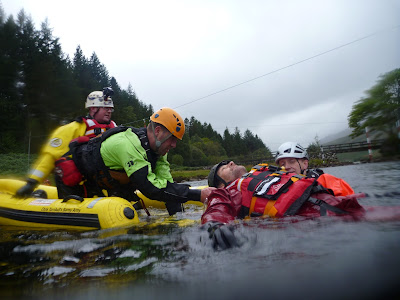 He's pulled into the boat. Notice the name on the side, BTW; that's the third in a row!


The stretcher did its thing too, although the consensus was we could just as well add floats to the stretcher we already have. The separate float was not such a success. Good to know! 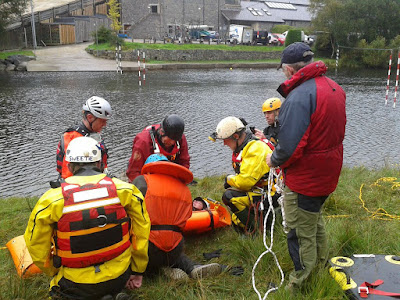 I've been turned into a sausage in order to test the floating stretcher. Pic by Heather.

When we were done with the watery stuff we assembled a piece of kit that seemed to have materialised out of thin air; it was a frame you can use for lowering people/stretchers/etc into holes and lifting them out again if that hole is either crumbly (with danger of dropping rocks on your casualty and rescuers) or devoid of high attachment points (such as trees). It's hard to lift out a stretcher if the rope is attached low, such as, to the tow bar of a car, which you would use if there's nothing else. Snazzy piece of kit! 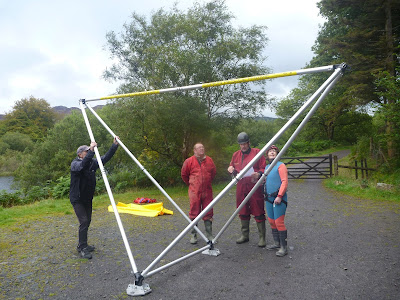 The Larkin frame assembled; has it been done correctly? Time to check the user guide.

When that all was done I was very hungry, but that was OK, we were done. We seem to be doing a proper in situ training in November! Will be fun!
Posted by Margot at 13:04