Two weeks ago we left the machine shaft of Catherine and Jane mine to a later day, as a different shaft (or rather, a winze) had taken up all our time. So this week we went back! We had a surprise; Simon had said he wouldn't come, but to our surprise we saw his distinctive car approach. What was that! It turned out he could not bear stay in the office the entire evening, when he knew it was forecast to be the last lovely evening. He would walk to the entrance with us, and then go back to continue his work... oh dear. 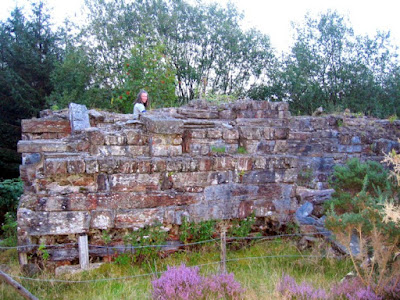 There had been a nice engine house there. Pic by Chris

We walked to the same spot as last week, but then a bit further. David vanished into some undergrowth. Struggling through brambles brought me to the edge he had dropped off. Indeed, an inclined shaft! I was soon down too, but I couldn't resist a level going off into the side only a few meters down. 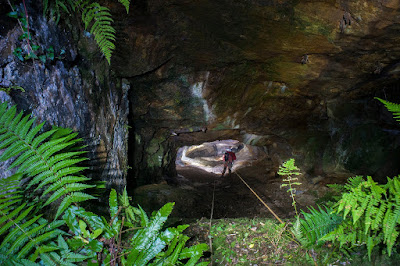 The inclined shaft. Pic by David


The level soon became crawl-height. The crawl ended in some dodgy stoping with loose stuff everywhere. I nosed around a bit, and checked everything but the way down. That just looked very iffy!

Don had gone into the same level but at the other side of the shaft, so when a rope was free I hopped over to the other side. More crawling! Don had already found a way out, and was now exploring some side tunnel. I went on; checked that the level indeed went out, and then tried to climb some stoping that went off perpendicularly. All good fun! And more people arrived. We saw that where Don had gone was another place full of nasty loose deads. We helped him get back safely, and went back to the shaft, to explore the next level down.

When I got there the pumping rods everyone had been going on about immediately flaunted their loveliness. Nice! With little support wheels! And David appeared, mentioning Sinker wanted to do a crawl with me. I'm always up for a nice crawl. We expected the crawl to come out where we'd been two weeks before. Lo and behold, it did! Sinker decided he would go out that way. I went back to go back up, bringing his bag. 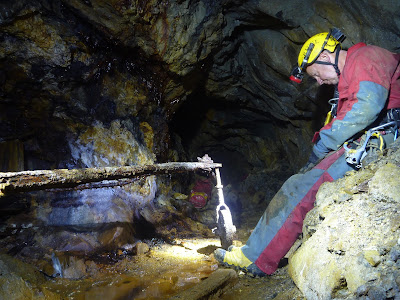 Mick admiring one of the support wheels of the pump rods

It was Sinker's birthday, so we decided to leave the (very limited) remainder of the mine to some other day, and go out. And so we did! Upon having come out we struggled a bit getting one of the ropes out, but David's superior strength sorted that out. This left us free to go back to the cars, and back to cake-with-a-dragon-on in Sinker's honour. A successful night! And back to slate next week!