If you want to do science near the Scottish north coast but your ship lives in Southampton you have to be ready for a fair amount of transit time. It would take us three days to get to the start. Three somewhat unusual days.

My main task was to review a paper; I had accepted the invitation to review before we left, and I wanted it out of the way before the science would start. I tend to be a bit of a perfectionist doing that. I pick on all typos and grammatical errors. I want to check all the references; do these really say what the authors say they say? I want to check what else there is in that field; is this manuscript really adding something new? Is their work precisely enough explained to be reproducible? Do the graphs really show what is claimed they show? Etcetera. So that takes time.

I got it done the day before the science started. Good going! I also managed to do some hair maintenance. Productive times! I didn’t get down to any Welsh reading, but that is something that I might have time for between things. 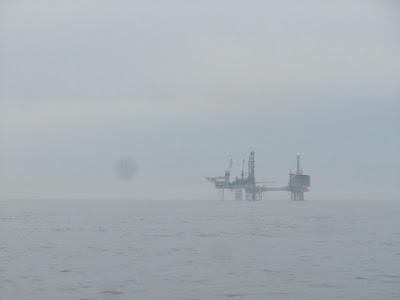 Transit through a millpon-like but still industrious North Sea

The most important thing that happened these three days, though, was refining the cruise plans. We had all made preliminary plans. Before we would get to the areas we had made plans about we would already start tweaking them; we all had proposed more work than there would be time for. Colm, our chief scientist, had to shave some of the slightly less relevant stuff off. But we also made some new plans, of regions we decided needed more attention than initially recognised. That only meant more shaving from the other bits!

Planning is exciting. Sometimes you have to give up a nice site, but you can come up with others. And it’s nice to discuss the science with the plethora of highly knowledgeable people we have on board.

One incident was not so nice; I saw the bigshots ponder the region east of Shetland. I had planned that. I had mailed my transect leader Tom my plan, including an excel sheet with all the coordinates, and also made a comprehensive document explaining why I had done what I’d done. He would compile that with similar files and distribute it. But the men were wondering where to go, what coordinates to start with, all that. I was surprised; they should know all that! But they had never seen my plan. Tom hadn’t sent it on. Before I’d know it, they would have made an entirely new plan without even looking at what I had done in Edinburgh. And I’d worked damn hard on it! So I dug out all the files again. I am happy for my plan to go out of the window, but I don’t want that to happen before it’s been evaluated. Why bother sending me to the other side of the country to work my ass off if you don’t even look at what I’ve done there. But the issue was resolved and calm descended once again. 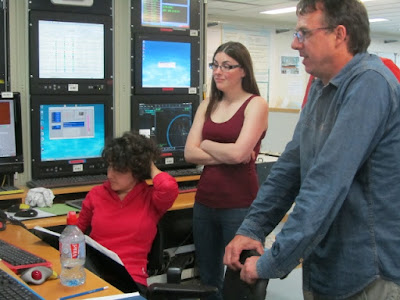 Staring at something interesting in the seismics: Marisa, Louise and Chris

The plan I had made was based on not very good seismics, and we had lovely seafloor topography data on board, so the plan did go out of the window, but not after I’d vented my spleen. It will get exciting! The other transects, which were based on much more data, will only get amended once we get there. The cruise tracks will stay roughly the same.

One more thing that belongs with the James Cook is its treadmill. I try to not get too badly out of shape when I am offshore. So on day 1 I wasn’t feeling it, but on days 3 and 4 I managed to get some nice 6-ish km runs in. Not bad! I hope I’ll keep some of that up when it gets busier.

The last thing we did before we started for real was sail through Pentland Firth; it’s the narrow strait between mainland Scotland and the islands just north of it. The captain had not been keen to go through there. It seems to have the strongest tidal currents in the UK. But fortunately, our timing was good and we hit the strait with west-going tide; we shot through at 19.3 knots. Mind you; normally we transit at something like 10 knots…

We couldn’t see land when we came through; it was foggy. But we knew that not only land, but also our first core were nigh! Bring it on! Three days of only planning, reviewing and running is enough!
Posted by Margot at 21:35