After three days of transit we would finally, finally start doing geophysics, pick final targets, and start coring. The geophys looked nice, and we had plenty of targets to choose from. And then we started! The first core came up. It looked good when it came out of the barrel! And it’s a bit of a faff to get it all cut up and labelled with a new coring team, but very soon we’ll be a well-oiled war machine. It was good to finally get proper mud in our hands. But as soon as we had the core on the bench the crew started lifting the vibrocorer with the cranes. What? It turned out there was a problem with the hydraulics. Oh dear! It would take hours to fix. Our next station was another vibrocore station, but we had to skip that and move straight to the piston coring station that was next up. I had seen the seismics and was rather sceptical this was sediment the piston core could cope with, but hey ho, we didn’t have much choice. 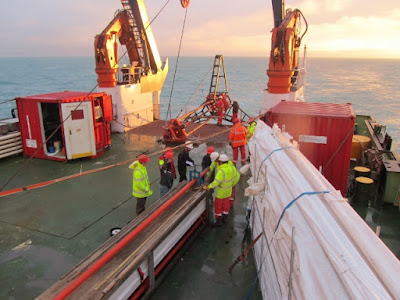 The other coring crew working in the evening light

As I thought, it came up banana-shaped. Oh well, it’s only a steel pipe, there’s more where that came from. We were more interested in what was inside. And we found: 4m of Holocene sand. Hmm! Not quite what we wanted. But by then the vibrocorer was repaired, so we just gave it another go with that. And to my surprise, a good core came out. The piston corer had probably been swept away by the current, and gone into the sediment at an angle, thus only getting modern stuff. The vibrocorer had gone in vertically and sampled great stuff. We just managed to process sit before our shift ended.
When it did end, the sun was about to set, so I walked around for a bit, trying to get some nice pictures. That way I was still up when the BGS proclaimed the vibrocorer had broken again. No! This time it would take them a whole lot longer to repair. We had to abandon our transect for now, and do geophysics elsewhere. I went to bed. 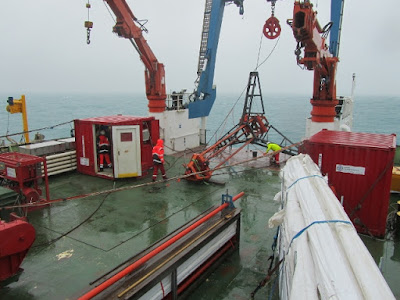 Fixing the vibrocorer in Scottish weather 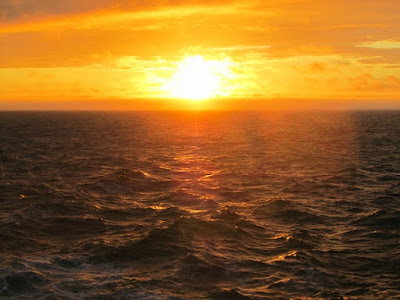 Sunset
I woke up in the middle of the night from some disturbance. I noticed the swell; we must have gone further offshore! I went back to bed. In the morning I heard the weather had gone too bad to core. And the corer was still broken. We had to go further inland, to be sheltered from the incoming heavy wind, and core there when it was possible again. So on the first day we had broken the vibrocorer twice, bent the piston core barrel, and run into weather that was too bad for coring. Not a very good start! But let’s hope from now on, it will only get better…
Posted by Margot at 08:14