After the first transects


The North Sea. It has quite a reputation. I packed sea sickness medication when I got ready for the cruise. We’ve been in the North Sea since July the 16th, but we haven’t seen much other than mirror-like seas. Sometimes the wind picked up at the end of our shift, and we got rocked to sleep nicely, but then all was calm again by the time we got back to work, and the coring was never threatened. So far it’s been a doddle! Will it stay that way? Hold that thought!

The times have changed since we got to Transect 2. As the distances here are larger, there are more periods with nothing to do other than stare at geophysics. That leaves me time to start on my processing. So I have washed and photographed all my 14C samples, I have labelled all the photos, I have made a list with what kind of sample they are and what sedimentary units they are from, I have made a list of in what sort of sections the cores have been cut (in the beginning, documentation of such was a bit sloppy) and corrected all the pictures with wrong labels, and I have done the editing of the pictures that were forgotten the first time around. I have made a list of all our cores, and information on where and when they were taken, how long they are, how much I like the sediment and more such things. I made maps of where the good cores are and from which ones we have a 14C sample. There is still more to do but it’s good to see so much tedious work being out of the way even before we’ve stopped coring! The only thing is that even though the days are less busy with coring and core splitting, I am more tired than I was before. But it’s worth it! No need to do all this tedious inventory work in the office! 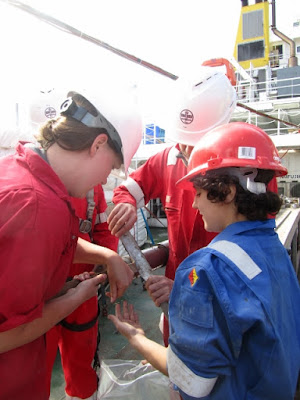 The work goes on: taking the core catcher out of the core liner once it's on deck 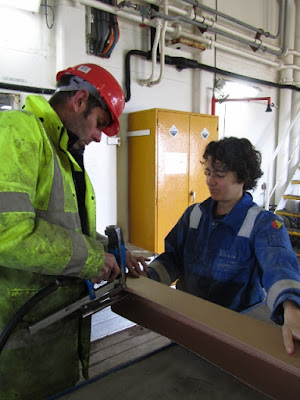 Making boxes for the cores sections to be stored in

So does anything become apparent doing all this work? Yes! We have 58 radiocarbon samples, which isn’t bad, and some of them are beauties. We don’t have as much good data from the Minch as we had hoped, as we had to make do without the vibrocorer for several days, and once it worked again we hit a few duds, but we have enough to work with. The other areas all have yielded nice cores, and the area around Shetland has proven to be the richest ground for 14C samples. Funnily enough, the best cores we took were from north of Cape Wrath (see also the blog post one of the cores got on its own), which was an area we hadn’t initially planned to core. I had just seen, during my visits to the BGS, that they had cored up some nice materials there, and we bolted on a little transect to see if we could too. And we clearly did! 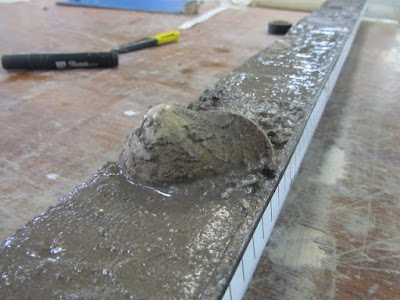 
So what about this North Sea, is it going to stay a millpond? Probably not! As I write this, the southern North Sea (we are still quite far up North, above Newcastle) seems to be a boiling churning inferno, while we are still steaming though dead calm waters. We only have just over a week to go; will the tail end of the cruise be curtailed by bad weather? Stay tuned! 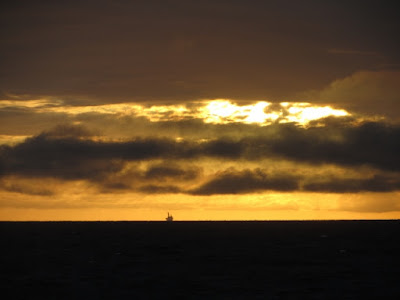 Oil rig in dramatic evening sky
Posted by Margot at 13:59