The second cruise, the last chance to get marine samples for our project! Half the marine side of the project depends on this! Important stuff. And I had been deeply involved in the preparation. And it's different when you know what to expect. So actually sailing out was a momentous occasion in my head.

As it was only me travelling to Southampton from Bangor I came by train. And the entire journey just went smoothly. I got to the ship, got on, and all was well. I saw all the familiar faces! That was great. And we could sail the next morning. Such a difference with last year's panic, when important bits had been left in Edinburgh, when there was trouble operating a crane, when the entire vibrocorer fell over and was damaged. That took days to sort out! But we couldn't cheer too soon.

We unpacked all the kit for the lab, had a safety briefing, had dinner, had a science meeting, and then it was already time for the pub. Normally you sign in and out individually when you leave and enter a docked ship; this time we had a lax guard who just wanted us to wave from a distance. Eh, OK. Pub. 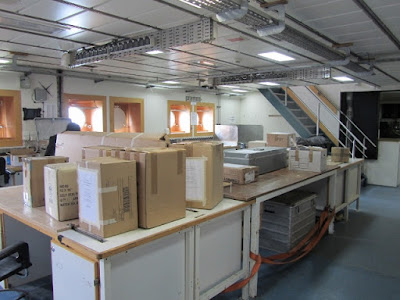 It was nice! In the time before you sail, the night shift and day shift can freely mingle. Later you will only see your shift mates on a regular basis. There were some emotions flaring, though, and for that reason I stayed longer than I otherwise would have done.

I woke up with a headache. And so did the captain, but in a different way; during the night, there seemed to have been several occasions of brazen theft. People just walking into officer's cabins, switching on the light, and making off with valuable items before the crew member realised what was going on. The affected crew members had reported hearing female voices, though, so the accusing finger pointed firmly in the scientific direction, as all the officers, engineers, galley crew and all-but-two of the technicians were male. We weren't impressed; anyone could have walked onto that ship. The captain clearly thought, though, it was an inside job. We (the females) were all questioned and our cabins were searched and later the entire ship was searched. They found everything back! But the tone was set. The captain made it known that upon any more of such fun he'd turn the ship around and call off the entire cruise. I felt helpless hearing that; I think everyone did. I don't think anything will happen but I'm not entirely at ease. Not a good way to start! But during all that we did sail, and slowly our first coring site approached. 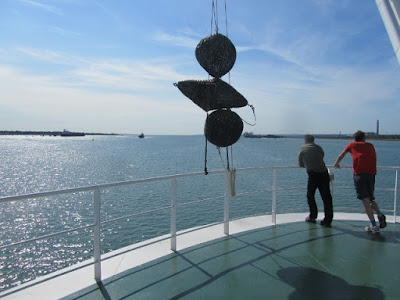 Getting out of the harbour in perfect sailing conditions

We did do a test core; this was mainly for reasons of testing the coring equipment, but it was a nice opportunity to train up the new coring teams. Unfortunately, only some gravel came up, but well, we'll get more opportunities later. We could also do some prep work like stapling together core boxes. All good fun! 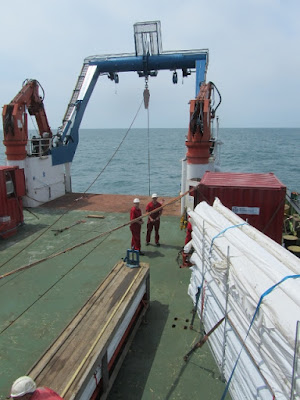 The vibrocorer is overboard for the first time!

We spent the rest of the time fine-tuning our coring transects, thinking about the radiocarbon dates from the previous cruise, writing and reviewing papers, reading books, and whatnot. Time well spent! Soon it will be hectic...
Posted by Margot at 11:42