Doing a second cruise makes for a nicely familiar feeling. It’s the same ship, I have the same cabin, we get the same routines. I knew many of the faces; more than half of the crew we have this time was there too last time. But the trips are profoundly different.


Last year we left when I had only been in the job for a few months. We didn’t have any cores yet, as we wouldn’t get any until we went off to sea. I had been looking at some potential core sites in the Celtic Sea, but that was only a small part of the cruise. Most of my suggested sites were dropped for reasons of time anyway. And during the first leg, which was the leg I would work on (Louise would do the second leg), we had our transect leader on board, and the coring team was lead by the transect leader of some of the transects of the second leg. So there was a flurry of people higher up in the pecking order, one of which very keen on emphasising just that. Altogether that lead to me being little more than a deck hand. I was just there to carry things and cut things and label things. And it’s noble work that needs to be done, but it’s not anywhere as satisfying as being actively involved. 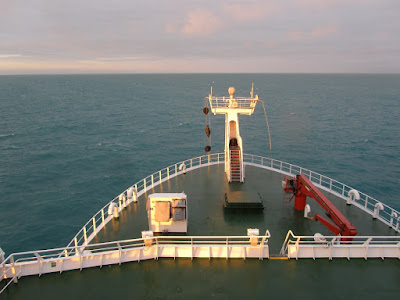 
The second leg was slightly better; our coring team leader left during the port call, so before her own transects were done. That’s a bit of a strange situation, but it had something to do with child care. So this leg I was coring team leader, but I had nothing to do with the transects, neither in preparation nor processing the data, so I knew little of it and there wasn’t as much at stake as during the first leg. Furthermore, the others in the coring team were only involved in a small part of the project, so when their part was done they were not particularly fascinated by the goings on anymore. Altogether the second leg was a lot more relaxed, but it wasn’t as fascinating as a cruise can be.


This year is different. I have been actively involved in the planning, and of course all planning goes overboard once the data gathered in situ comes in, but Tom, my transect leader, tries to keep me in the loop. I know now where we go, why we go there, what we lose if we don’t go there, and all such things. And I’ve been working on the first batch of cores, so that makes the second batch a lot more evocative. I can now already see the analyses I’ll do, and make sure all is ready for them. This time I’ll hit the ground running and it feels good.


This time, I’m a coring team leader during the entire cruise. And my team is amazing; we have Maria, a crazy and enthusiastic Basque, and Dave and Chris, who are project bigshots. Dave is leader of a transect in the North Sea, and Chris is the PI. They have both been involved in the project from the beginning. They are emotionally involved in all of it! So wherever we are sailing; they care about what cores come up. It’s nice to work with people who have a genuine interest in what’s going on. It also means they have a vested interest in doing all the work well. And the men are very practical chaps; Chris, for instance, is not only an academic but also a sheep farmer. If a router plays up, for instance, they sort it. They are all a pleasure to work with! 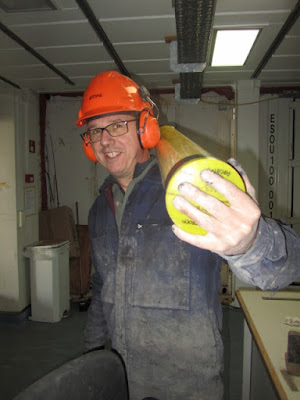 Chris happily lumberjacking off with a core section 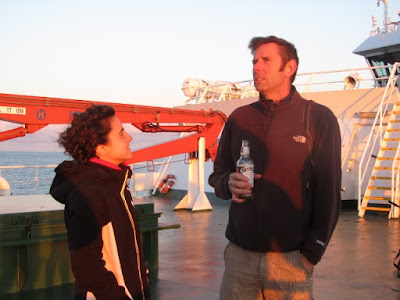 Maria and Dave enjoying the sunset after a long shift


One small thing that matters a lot is that this time, we have music in the lab. When you’re splitting and describing piston cores with metre after metre of homogenous mud you want some distraction. So this year I brought a speaker! And we all have music with us, so we take turns in plugging our iPods in and letting the lab ring with our tunes. Great!

Altogether it’s the same ship, many of the same people, but I’m having a lot more fun! We’re almost halfway; more than two weeks of hard but very satisfying work to do!
Posted by Margot at 14:21