I wrote about trouble with the corers. I had seen nothing yet. We cored happily for some two days, and then things deteriorated. The vibrocorer came up empty. Can happen; it may hit a big rock that prevents sediment from coming in. It happened again. We started to think the currents in the area we were coring were so strong they had washed away all corable sediments. But after several more duds we found out it was vibrocore failure. The BGS did their best to fix it. They tried and tried. In the meantime we just sought the deeper basins in the area; the piston corer worked fine. We got one after the other. I’m not so keen on them. They don’t give us the deglacial contact we like so much. But one has to make do with what’s available! My coring team didn’t share my dislike at first, but after they had logged metre after metre of homogenous Holocene clay they started seeing my point of view. 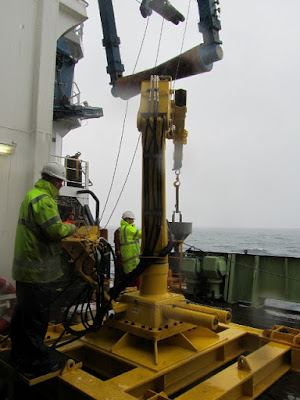 Working the winch of the piston core

In the end the BGS (Broken Gear Squad, according to one of the galley staff) figured out the fault was in the so-called umbilical cord of the corer. The worst place it could be! But still repairable. It would take time, though. And with that time ticking away, the amount of data and samples we could collect slowly but steadily shrunk. How much would we have to sacrifice to this fault? Would we be able to complete the project more or less as planned? Stay tuned… 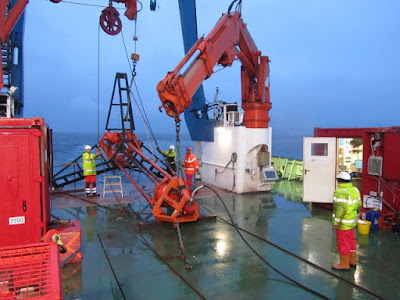 Still trying to repair the vibrocore