The first proper training run had left me doubting seriously whether this entire marathon malarkey was a good idea. The second one gave me faith that is was! And got me a bit of a tan. But the pièce de résistance was still to come. A proper 20 mile run. That was scheduled for the week after the sunny run with Gordy. The plan was to run in a group of three; Gordy's wife Claire would join. And somewhere during the week I managed to compose a rather lovely route, if I may say so. All looked well!

And then I got a message from Gordy; he had injured his ankle during a game of football. Oh no! Such a risky sport. All my office mates (whom he plays with) are perennially limping or black-eyed or swollen or a combination of all. This injury clearly ruled out running 32 km. I would have to go alone!

The weekend approached. The weather forecast got worse and worse. I was glad I had found a nice route; it would have to be the landscape that would keep me going. I checked; the Met office claimed it would rain the entire day. Didn't matter when I'd set off, then. I randomly got ready and got into the car. The pouring rain did nothing for my enthusiasm but hey, a woman's gotta do what a woman's gotta do. At least it wasn't too windy. In Menai Bridge, that is.

When I parked where I intended to I noticed that there, actually, it was very gusty. And rainy. Oh well. I had initially intended to run in a wind proof jacket; I decided I had better go for waterproof. Not entirely feeling it I went off. It started very steep uphill, too!

Soon I got to a junction. I wasn't sure what to do there, but I had only just started so I didn't want to stop and check the map. The horizontal rain wasn't helping. I went for what seemed right. Soon I got to a gate where a bunch of GoreTexed youngsters were huddling together. I started to realise I might accidentally be doing this trip in different order from what I had intended. A look on the map confirmed this. Oh well, this worked too. As long as I would turn around here and take a right turn. That would take me to the reservoir that I had approached from the other side back in more wintery days. There I would turn back, retrace my steps to that very gate, and then go through and proceed to the next reservoir. And so I did. 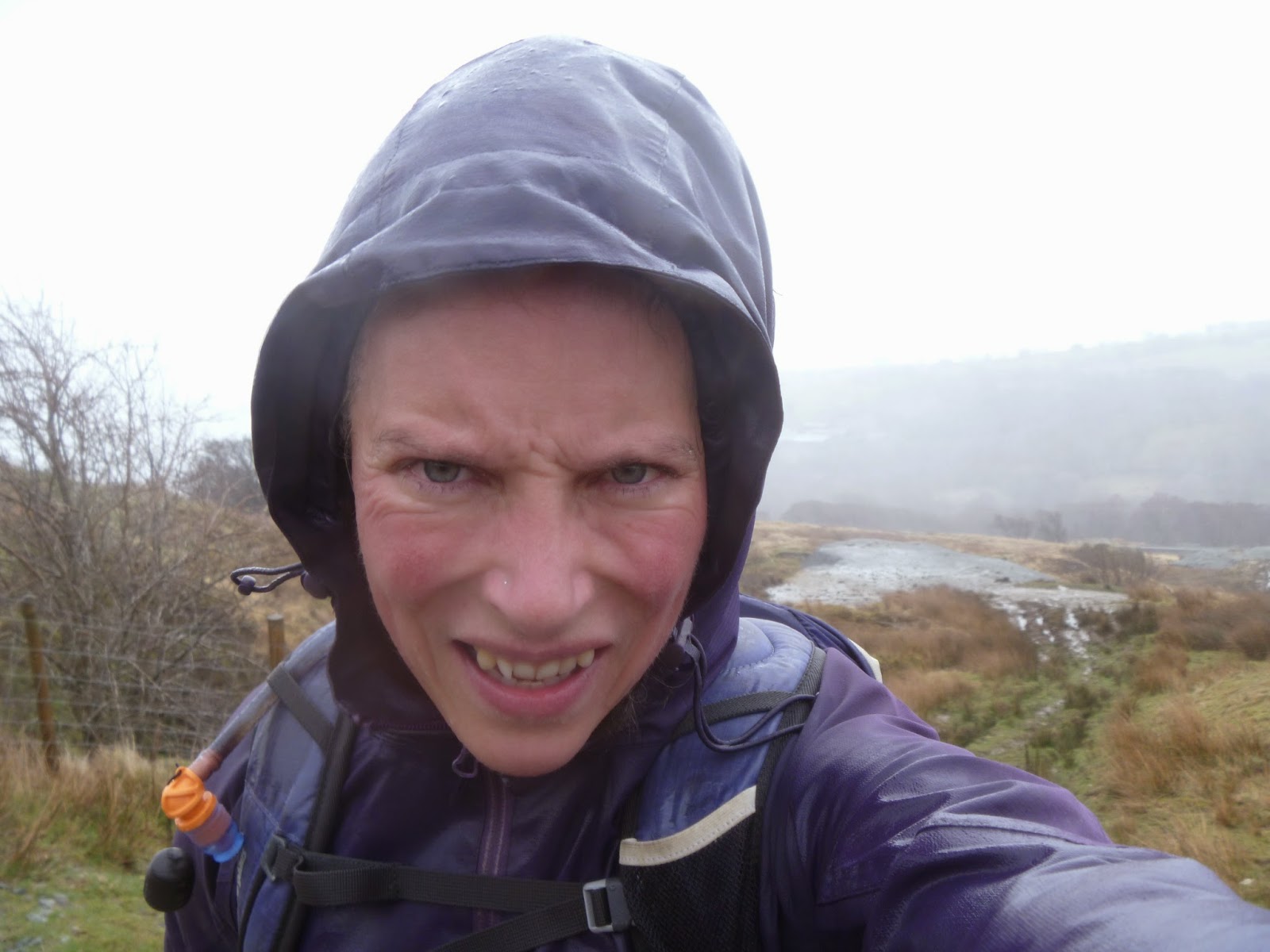 I kept coming across small groups of dripping teenagers. I suspected it had something to do with the Duke of Edinburgh award scheme. They were nice! Getting out of my way, offering me Maltezers. But they were the sunniest I encountered; the weather was so atrocious I was wondering if I stood a chance to complete the whole 20 miles. But for now I just struggled on. And I got to the reservoir. It was pretty! 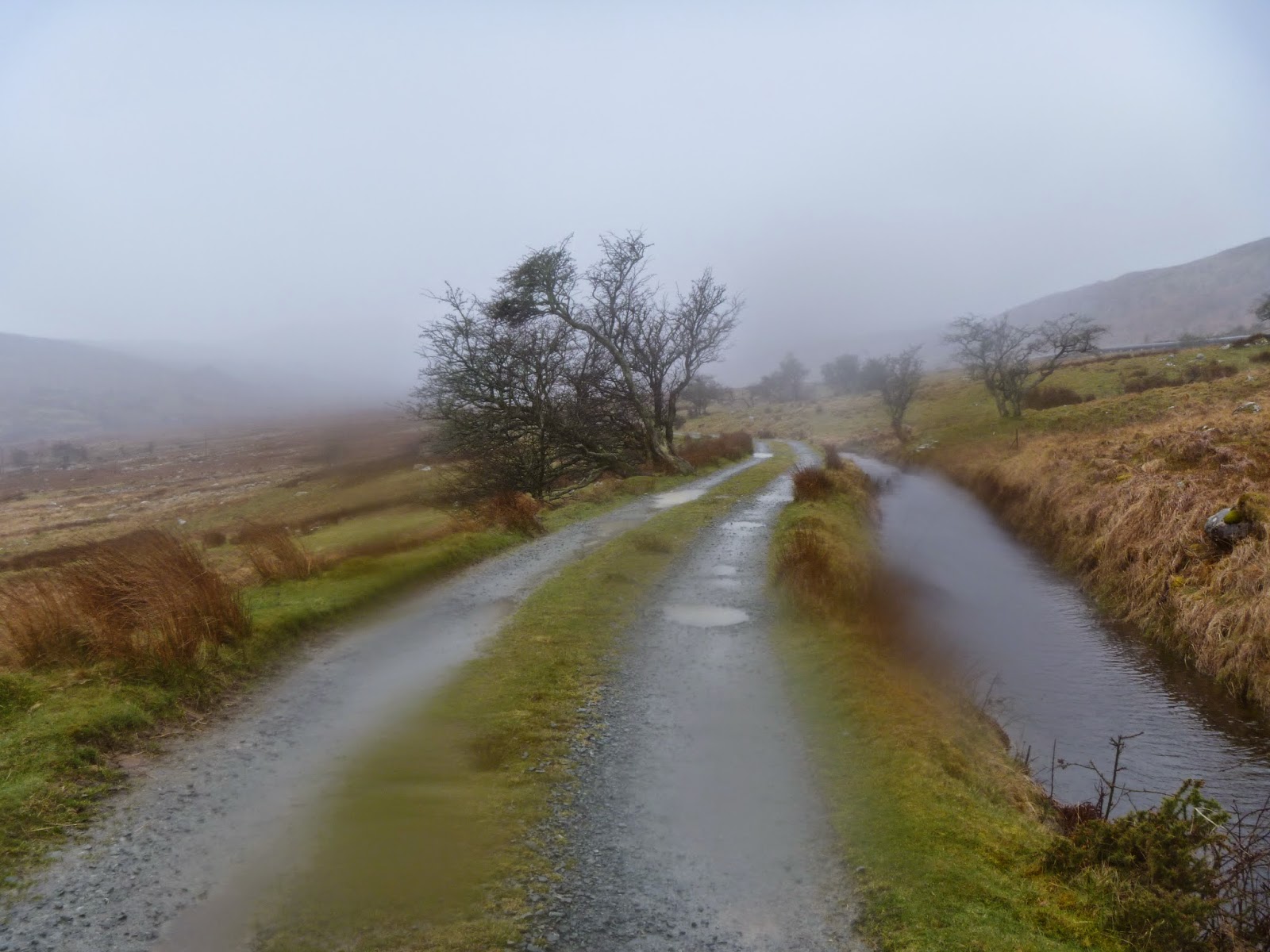 Wales: even pretty in shitty weather! 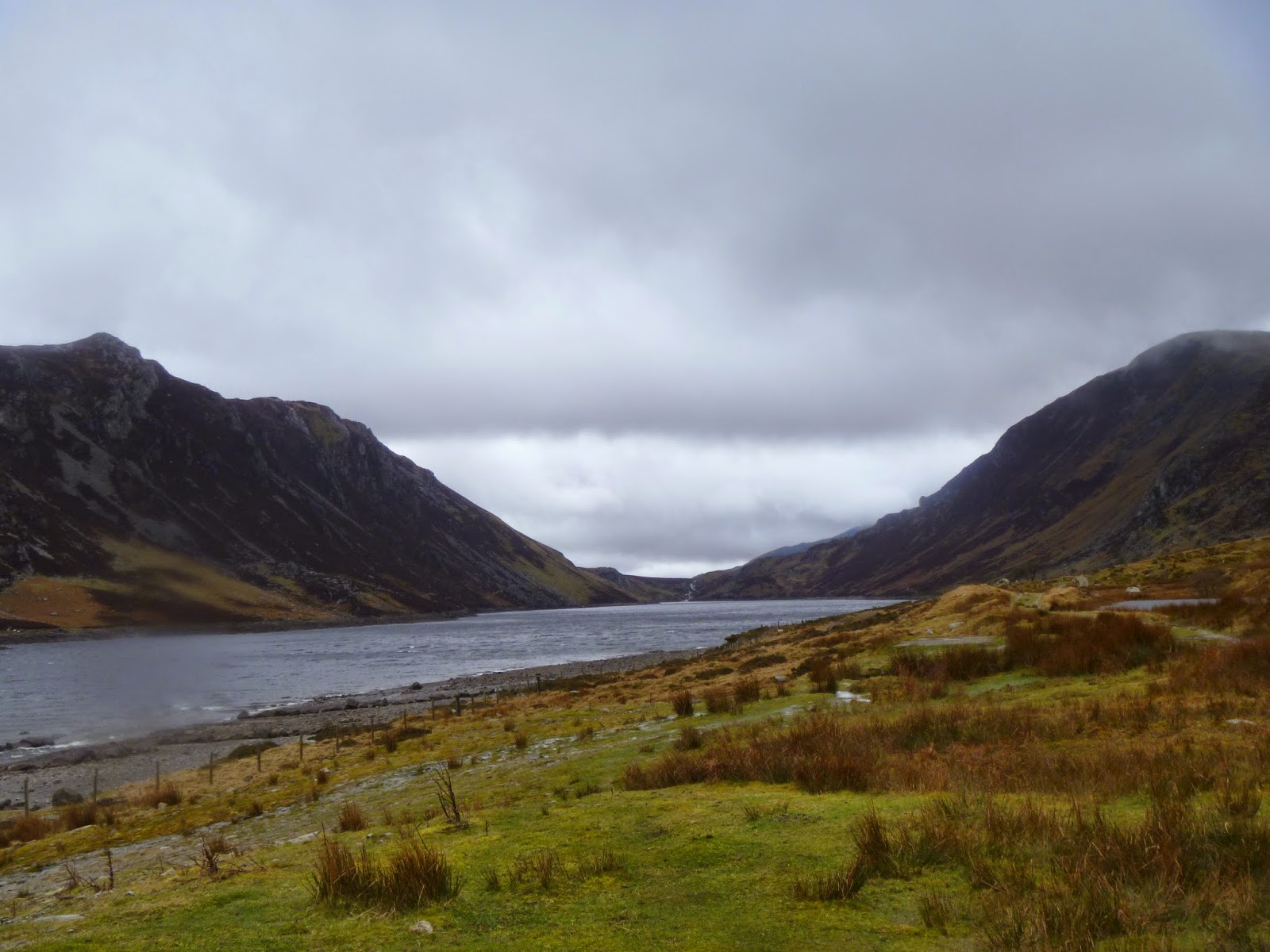 The reservoir! Seen from the other side here 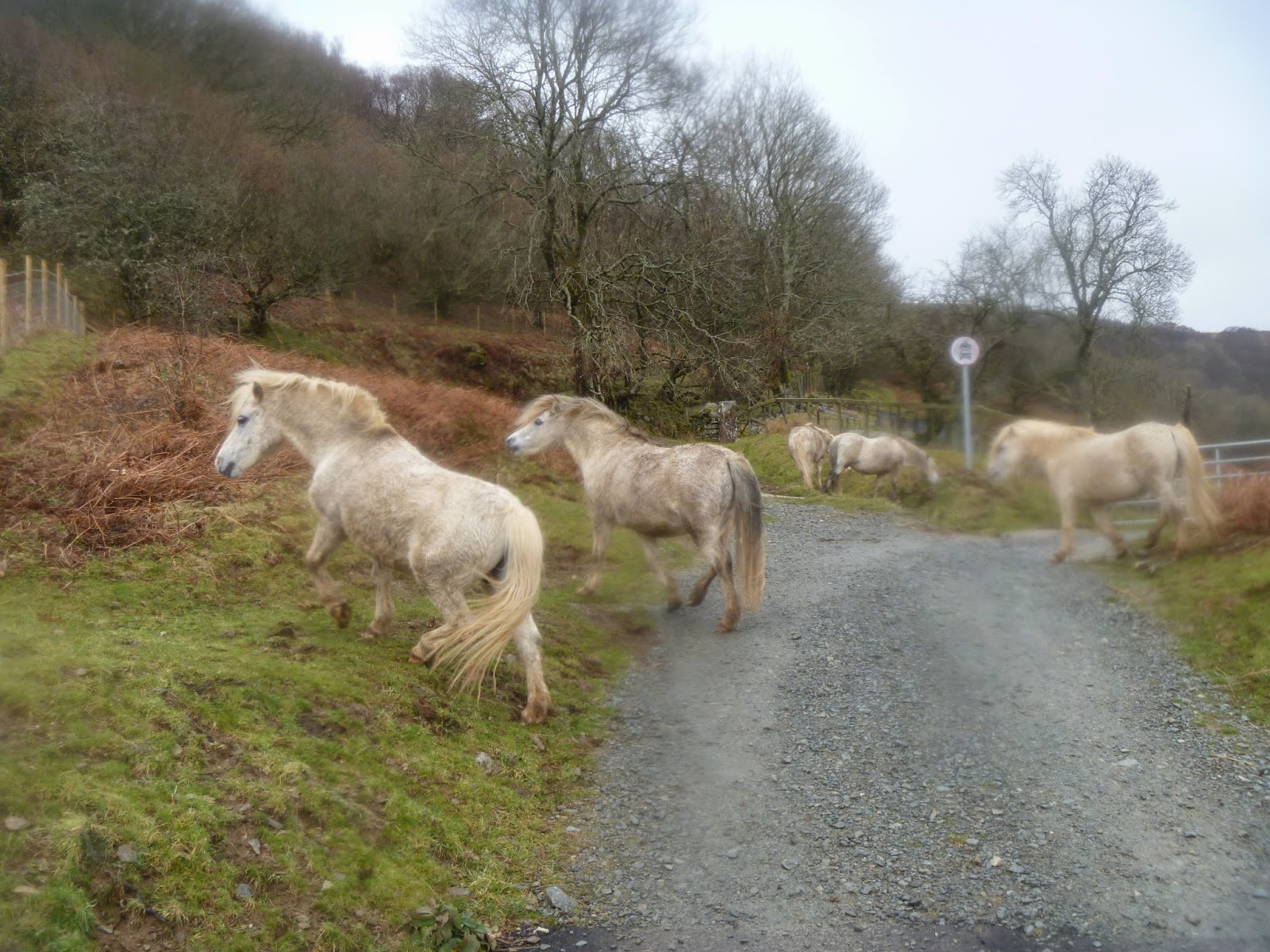 The second time I got to the gate there was again a group there, but this time they weren't human


On my way back I bumped in the same groups as I had seen at the gate. This time they stopped me and asked what I was doing. I explained. And so did they; they turned out to not be DoE kids, but army cadets! That's some boyscoutish program, associated with the actual army, they have here.

Going mildly downhill, and this time with the rain in my back, things got easier. But that way I reached the point where I made a wide U-turn. The rain picked up again, and the wind was in my face again! And the path got muddy. Too muddy to run, quite often. This wasn't going too well. But I scampered on.

It was the landscape again that saved me. This valley was beautiful too! Better than the previous one! Unfortunately, the path was so wet (and the air so cold) I couldn't feel my feet for miles. But I knew I was getting close to the furthest point on the route. That was good! 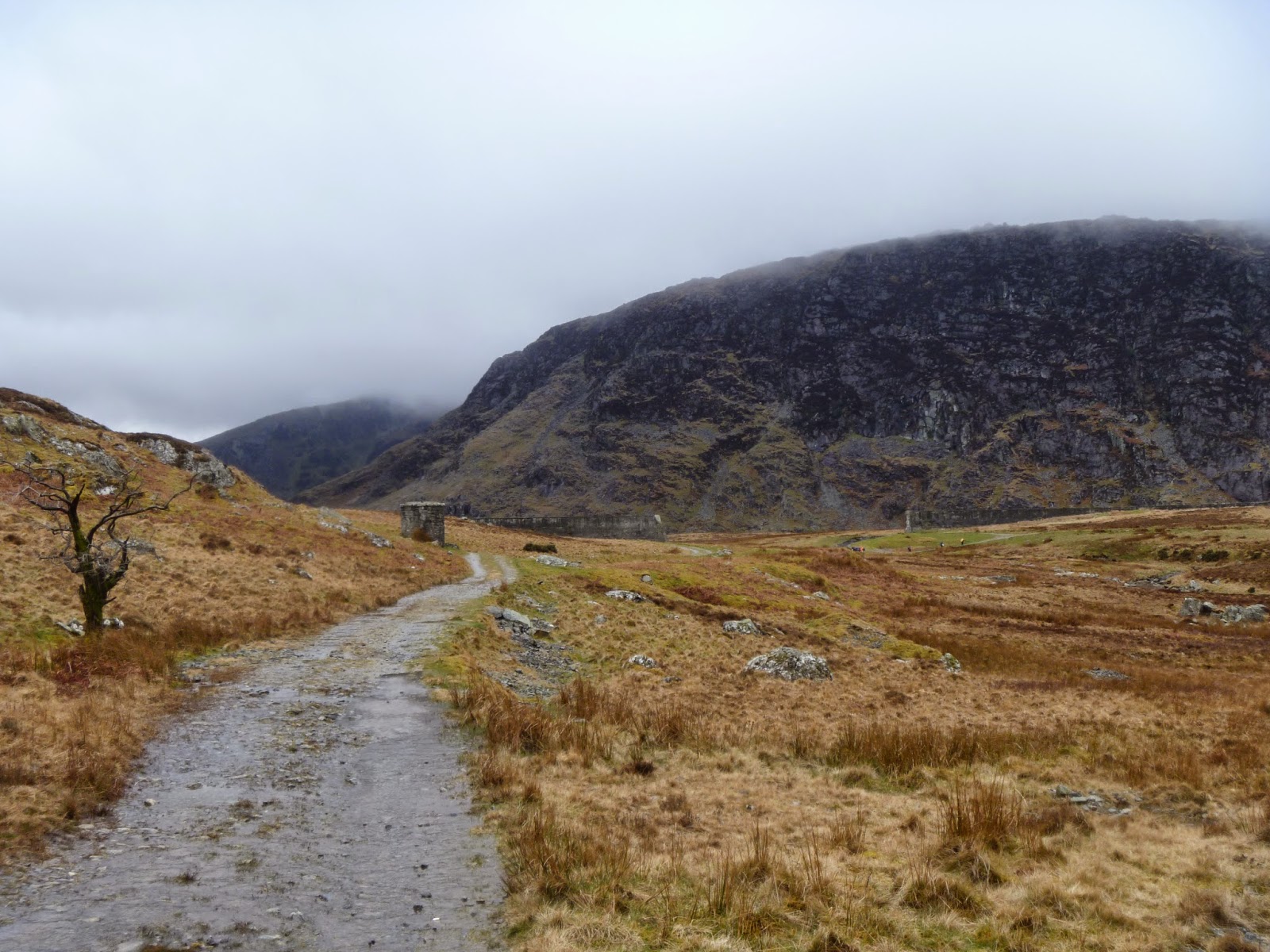 In full size you can see the concrete wall, and some colourful dots which are cadets

I knew I was heading for a reservoir, but I wasn't ready for the enormous yet discontinuous concrete wall that lined half the valley. What was that all about? The reservoir had been intended bigger, but after building most of the dam they had given up? I hope some local knows about this. It looked a bit surreal! (NB: I googled it. Read the story here!)

Panoramic picture which the breach indicated, for those who followed the link about the concrete wall (click for full size, evidently)


I ventured onto the path I would take into the valley, but only until it would get small. It was very rocky and wet. I walked. Oh well. And the valley floor was a veritable swamp. I wasn't quite sure until what point this path was part of my route; it looked a bit different in real life from on Google Maps. I made an executive decision. I took a pic of the furthest point and turned back. I was glad to reach the main path again; that was runnable. Mostly... 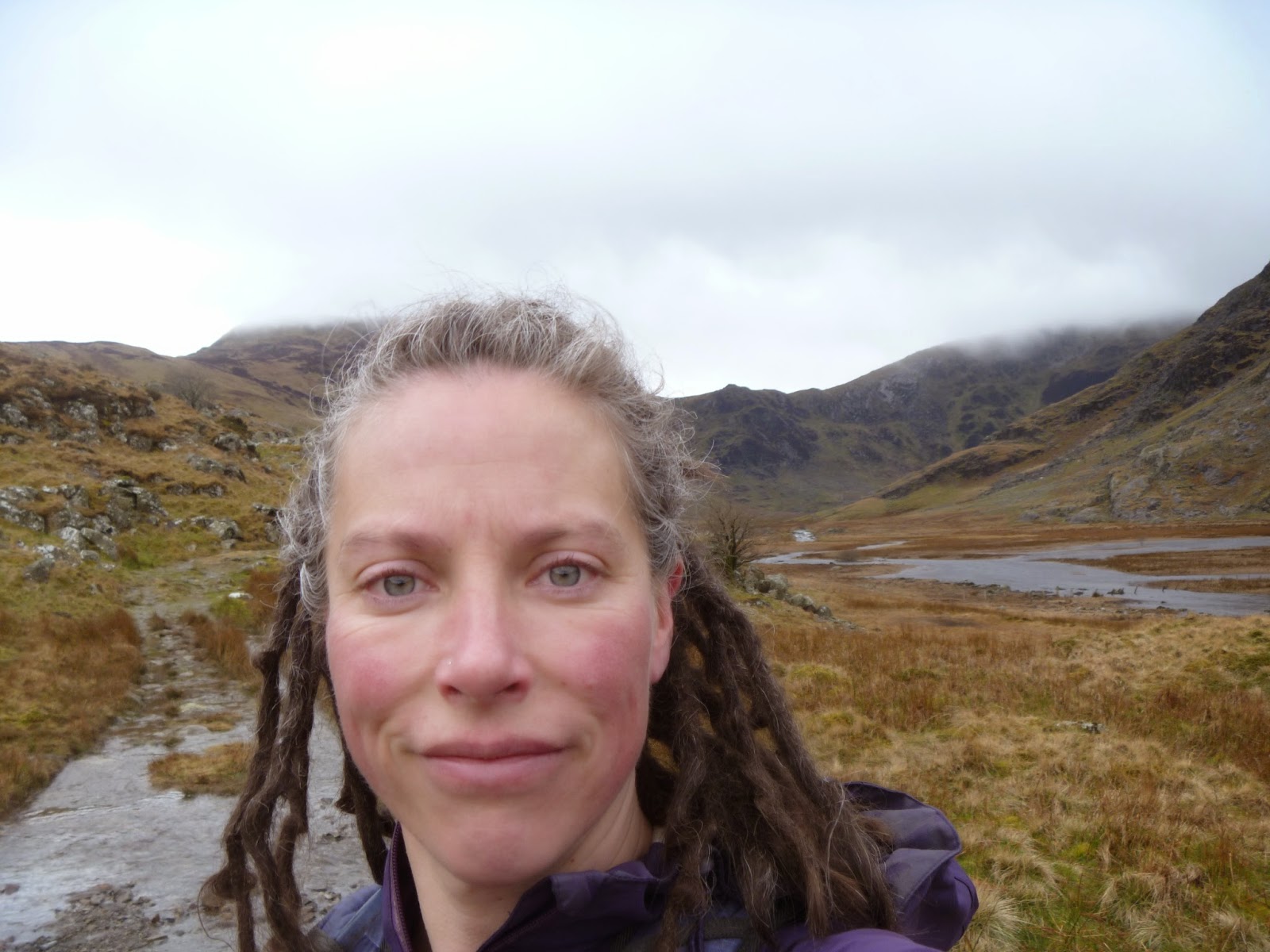 Feeling better by this time! Dryer, too. Except for my feet. Notice the river on the path behind me...


I knew from there I would just follow the path, which would turn into a road after a few kilometers, all the way back to the car. And soon the path was rather smooth. And as a road, it was even more so. And I had the wind in my back again. I was making good progress again! Soon I could feel my feet again. And even later even the sun gave a small acte de présence. Maybe I should have waited a bit anyway; the worst weather had all been in the first hour! But that is Captain Hindsight (a not so useful superhero) speaking. 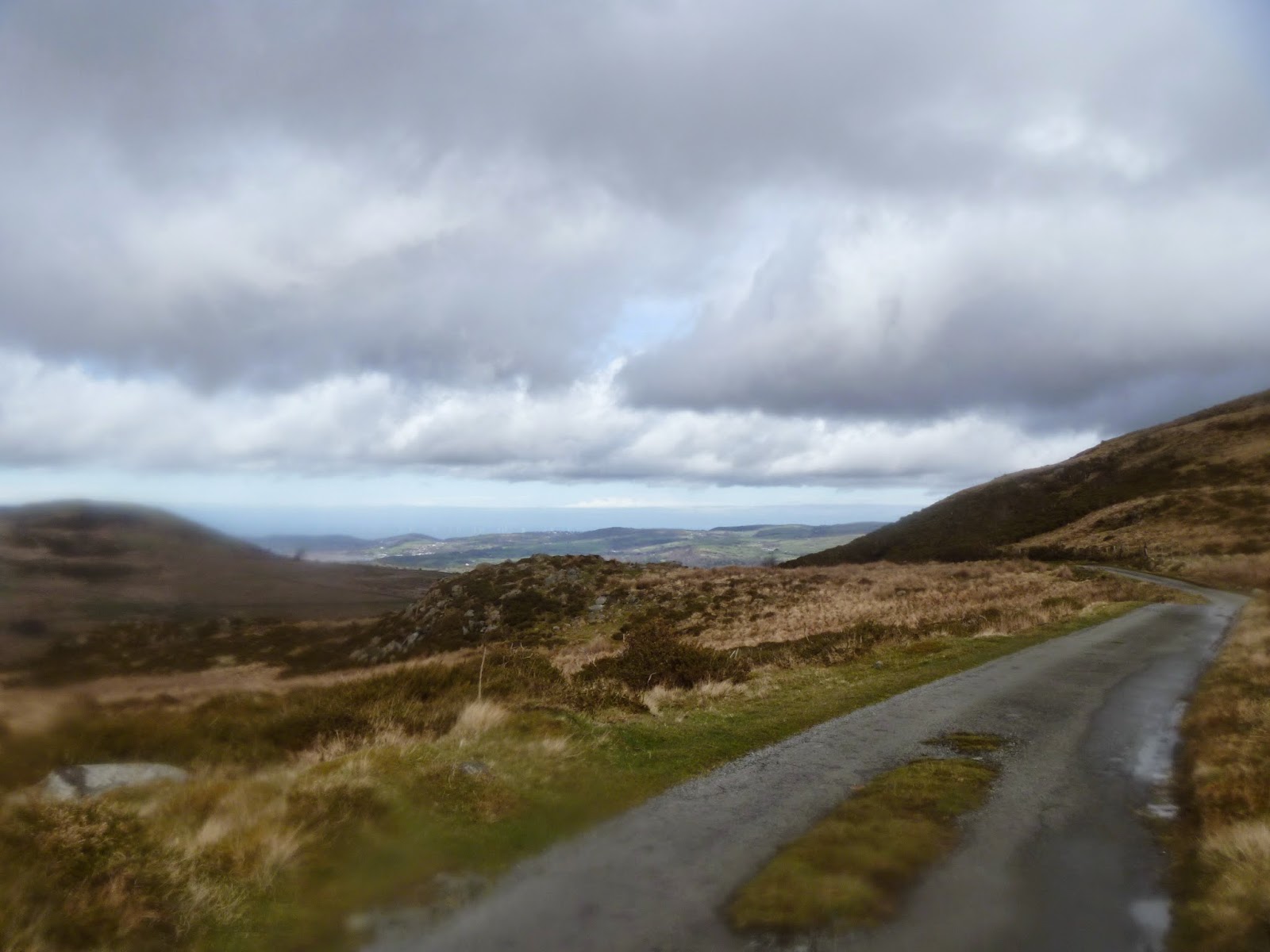 In the end there was some blue sky to be seen, in the distance!


The last mile was hard due to its steep descent, but at least it was dry. I wasn't even too knackered! And my knee was still alright. It had taken me some 4 hr 15; not bad. Thirty-two kilometers and all still well; if I can do that I can perhaps do 42 kilometers on the flat, and with a screaming audience! And chances are the weather won't be this awful on the day of the race. I think I'm ready! If I keep up the running (but not this far) up I should be fine. Watch this space! Three weeks to go...