Last week my tenacity was tested. Doing twenty miles on one's own in atrocious weather is for the stubborn. It was supposed to be the longest training run; this week I should do some 10 miles. Easy peasy! And the weather was forecast to be a lot calmer. Cloudy, but dry, and not very windy.

Things got better. David has drawn my attention to a bicycle path along the river that drains the reservoir near Llangefni, which I had run around twice already. I suppose it originally drained onto the sea pretty close to the town, but the Welsh had invited the Dutch at some time it seems, and had them drain the sea arm in order to provide more arable land. The river had, or course, been straightened. It looked like a nice run for this stage of the training; flat, on asphalt, and indeed 10 miles long (it could be longer). And as David lives around the corner this route came with added perks. I figured I might park at his place, do the run, and then have him make me a coffee. And he fell for it!

On an unexpectedly sunny day I parked up on his drive. I could hear some rummaging sounds; it sounded like David engaged in his default activity: faffing with very old cars. And indeed; I found him surrounded by large bits of Landrover. He suggested a pre-run coffee; how could I refuse? It was even warm enough to enjoy that in the garden, in the sun.

After the coffee I set off. It was a rather straightforward route! It was stunning weather, and after only minutes I was running in a T-shirt. It's spring! The weather was better than the view, even though that wasn't bad either, but the path along the straight river was so devoid of surprises I decided to run with music. And after 45 minutes I reached the waypoint. Time to turn back! And with the thought of more coffee I accelerated a bit too much perhaps. But I had seen worse, and after another 45 minutes I was back where I had started. David was surprised to see me this soon, but hey, after these monster runs the past few weeks I barely bat an eyelid at a 10-miler. 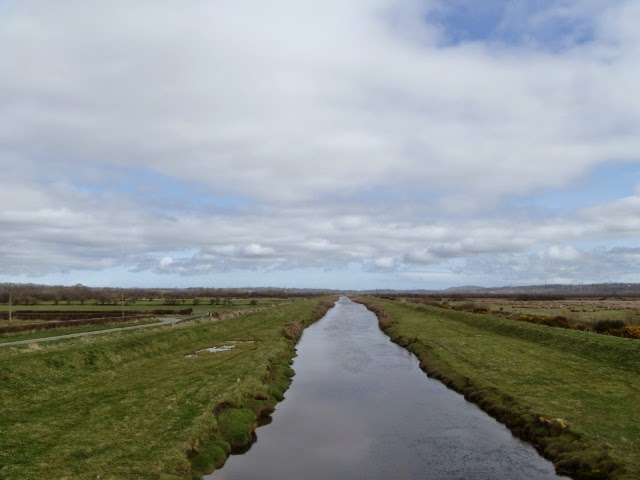 View from the bridge where the path crossed the river


Coffee was abandoned in favour of squash, hot cross buns, and jacket potatoes. And then I helped David lug some extra large chunks of Landrover around. Then it was time to go home again. And this route had none of the drama of the previous week, but it was rather spiffing to run in the sun, and from a base where someone made me beverages! Next week is the last training weekend; that should just have an eight miler. Maybe with my sister!
Posted by Margot at 08:42