What on Earth is fog of sex? I must admit, I'm still not quite sure. One thing I do know: it's a project by the University of South Wales that involves both scientific research, and a movie inspired by its results (look here, here and here for more info, and watch the trailer here). And what is it about? Students who work in the sex industry. I could imagine they use the phrase "fog" as it seems that the students in question, the people who purchase their services, and the universities these students attend all tend to prefer to shroud themselves in tactical silence about the topic. Nobody seemed to have ever studied the topic before, but it became clear the phenomenon was huge. And if nobody talks about it, nobody thinks about how to deal with it. Sex work is something society probably never will get rid of, and then one has best deal with it the best possible way. Make sure anyone considering taking this step gets (or at least can get) all the information they need. And among that information belongs a good evaluation of the risks. And one should make sure universities have someone students can turn to when they have issues. 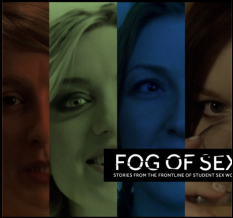 There was an email about the screening of the film, with a Q&A afterwards with the filmmaker. I decided to go! And didn't regret it.

The film was made as follows: for the scientific project students had been asked to fill out questionnaires, and there was some place students were encouraged to go to for a chat if they were involved in sex work. Some of these students were interviewed about their experiences. And some of these interviews were transcribed, and then re-enacted with actors. And these staged interviews were then edited into a movie. Simple! If you wish to (and have an opportunity to) see this movie yourself, stop here; spoiler alert! Continue at the three hashes.

They started with a girl who posed in several stages of undressedness for various magazines. She was entirely open about it, seemed to be quite fine with it, and had even brought her grandma to her first photoshoot.

There was a girl who had a website on which she sold knickers she had worn. A woman who worked as a very short-skirted cleaner. Then it got a bit more grim. There was the phone sex worker, who noticed it tends to be the people who want strange things who phone such lines. Her first call involved a bloke who got off on her retching for prolonged amounts of time. It seemed to get weirder than that.

And then there was a girl of whom government figured she should be financially supported by her parents, but her parents refused, and she struggled to make ends meet. She got behind with the rent, and would be evicted if she hadn't thought of something quickly. But she did. She hated it, but she didn't become homeless, and did manage to pay tuition fees. She spoke of the awful considerations you have to make. Have a man pay beforehand, and they get an inflated sense of entitlement which can be very dangerous. Ask them to pay afterwards, and they may refuse. What could she do to make them, after all? She realised she risked her life every day. But she wanted to graduate.

So all student sex workers are female? No, the study revealed that more than half are men. But are the men willing to show up for a chat, and even be interviewed? Heck no.

The filmmaker also revealed that two of these ladies had got into trouble with their universities. The scantily clad model had had to fight for her place in uni, and the last-mentioned lady had been found out by her university, and had been forced to move. The universities claimed they brought them into disrepute. And the filmmaker did admit it wasn't likely universities would show off their amazing sex workers' policies on open days, but this seems decidedly unjust. It's not as if they have in their regulations that you can't earn money on the side like that. And maybe some of it may be against the law, but surely half-naked posing isn't.

He also mentioned all main TV stations had refused to air the film. Silly; the issue doesn't go away when you ignore it! But maybe the word will spread through the universities where it is screened, and social media. And blogs...