Even before I had moved up to Wales, people had told me Crib Goch was a ridge to visit. Crib what? It means as much as the red arête (which is also a very good name!), and that is a rather descriptive name. The rock is rather rusty, and it is such a textbook example of a glacially-carved, sharp mountain ridge I've used it in my glaciology lectures. And it is one of the access routes to the top of Snowdon. A good-weather-route only! Just google "Crib Goch rescue" if you don't believe me. And just because it is a bit challenging that it was recommended to me.

I'd not done it yet; a Crib Goch trip requires a clear day (you don't get much out of it if you can't see the view); absence of wind, so you don't get blown off; and a day on which you rise early. And finally, the forecast was bright. And windless! And there was nothing stopping me from rising early. So I was going to seize this opportunity!

So why the early start? Well, I got to the designated parking lot at 7:45 and it was already some 80% full. That's what you get on a sunny day, especially if it is something like Easter Tuesday and many people have a day off! But I parked, paid the substantial charge, and set off. The route starts the same as the Pyg Track; when that crosses the ridge you head up, rather than ahead. Still on the Pyg Track, a Derbyshire man overtook me. Soon it got scrambly! As expected. A last view on the hostel on the pass, where I was parked 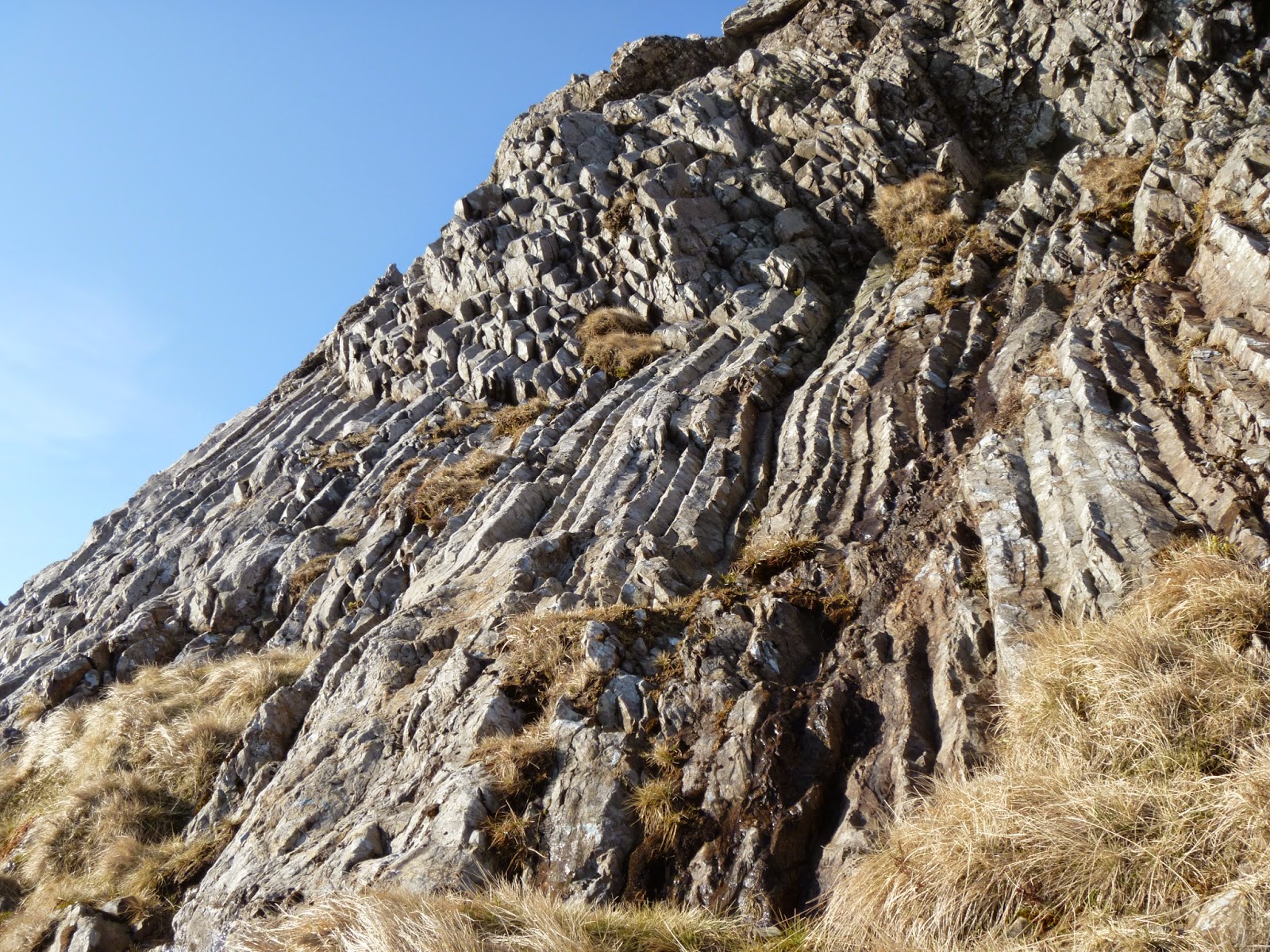 
After a bit of scrambling another man overtook me. These would be the only people I would see on the ridge! After lots of scrambling I got to the ridge. And blimey, it is narrow indeed! Really not a place you want to be in heavy wind. But it was a good day for it! It was a beautiful place, and an interesting scramble.

On the last climb before the merging with the Miner's and Pyg paths I found a pole. Surprise! Might come in handy; I have one broken one. And then I was at the main path. It was busy there! It had taken me some 2.5 hours. 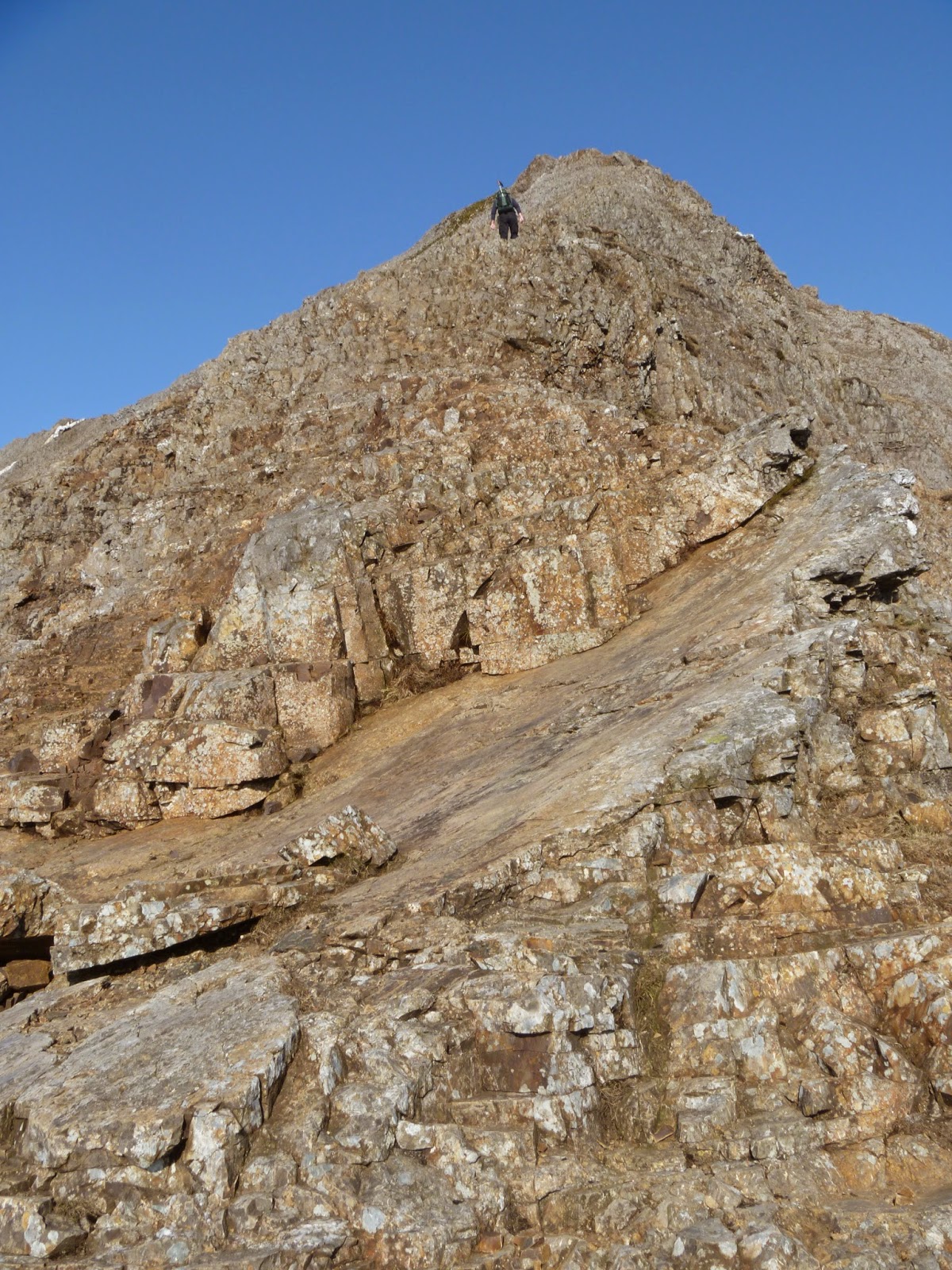 Approaching the top of the crib. Notice the bedding plane! At least, I think it is bedding. 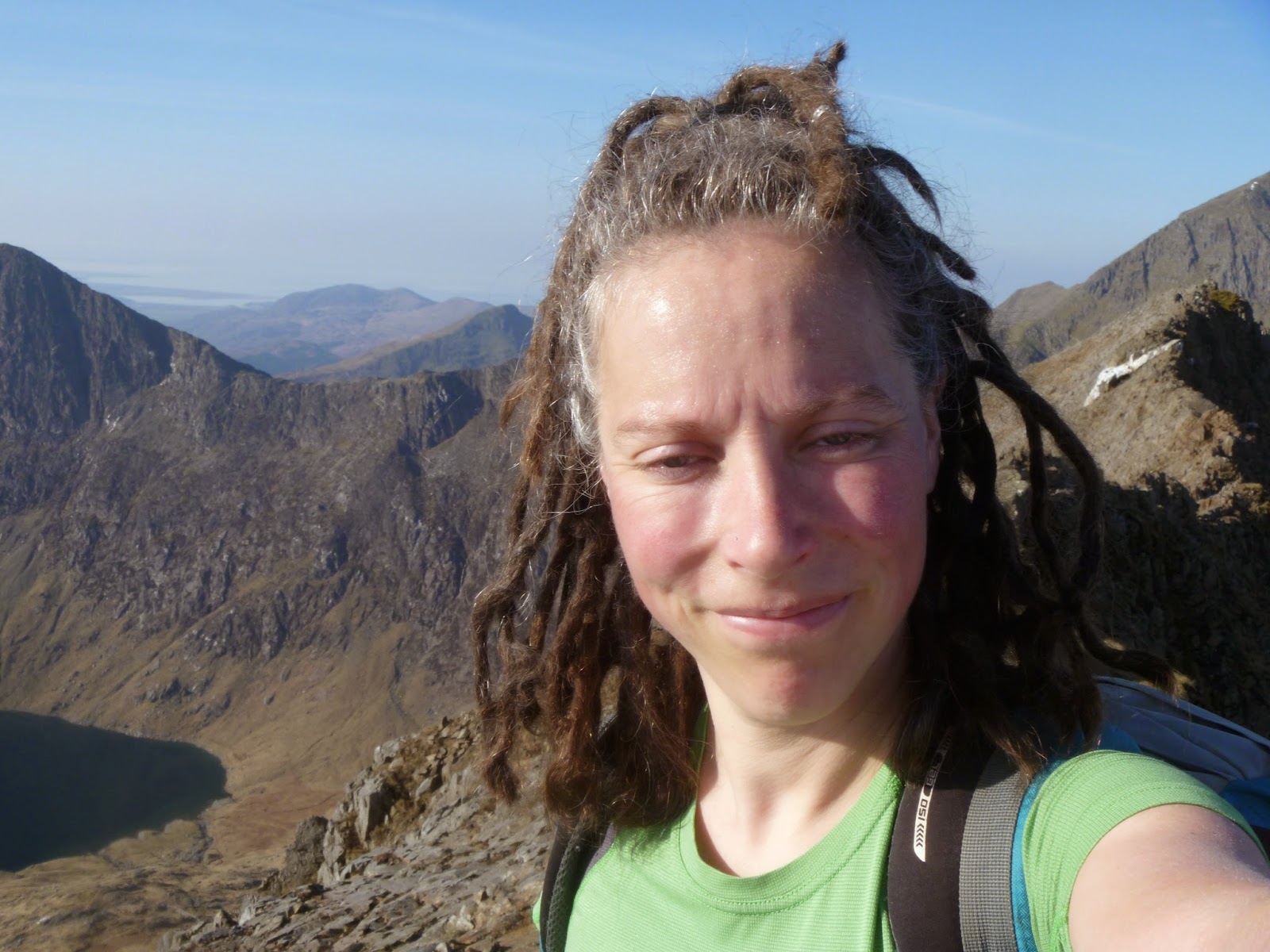 Too bright to look into the sun!

Panorama with a conspicuous quartz vein in the centre. Snowdon is almost hidden by the veined peak; Lliwedd on the left


I walked to the summit. I had figured I might walk the entire horseshoe; that would be another ridge on the other side, but by the looks of it, not such a scrambly one as Crib Goch. I started in that direction. It started steep and messy on a scree slope. I was slow! I did not want to take one wrong step and then kiss my marathon goodbye. I was wondering a bit if Lliwedd, the other ridge, was such a good idea. But then the landscape got milder. Time for a sandwich and a cuppa! And a look on my phone. Oh dear; messages from the bike repair man who wanted to come give me my bike back, and from a student. The world wanted things from me. 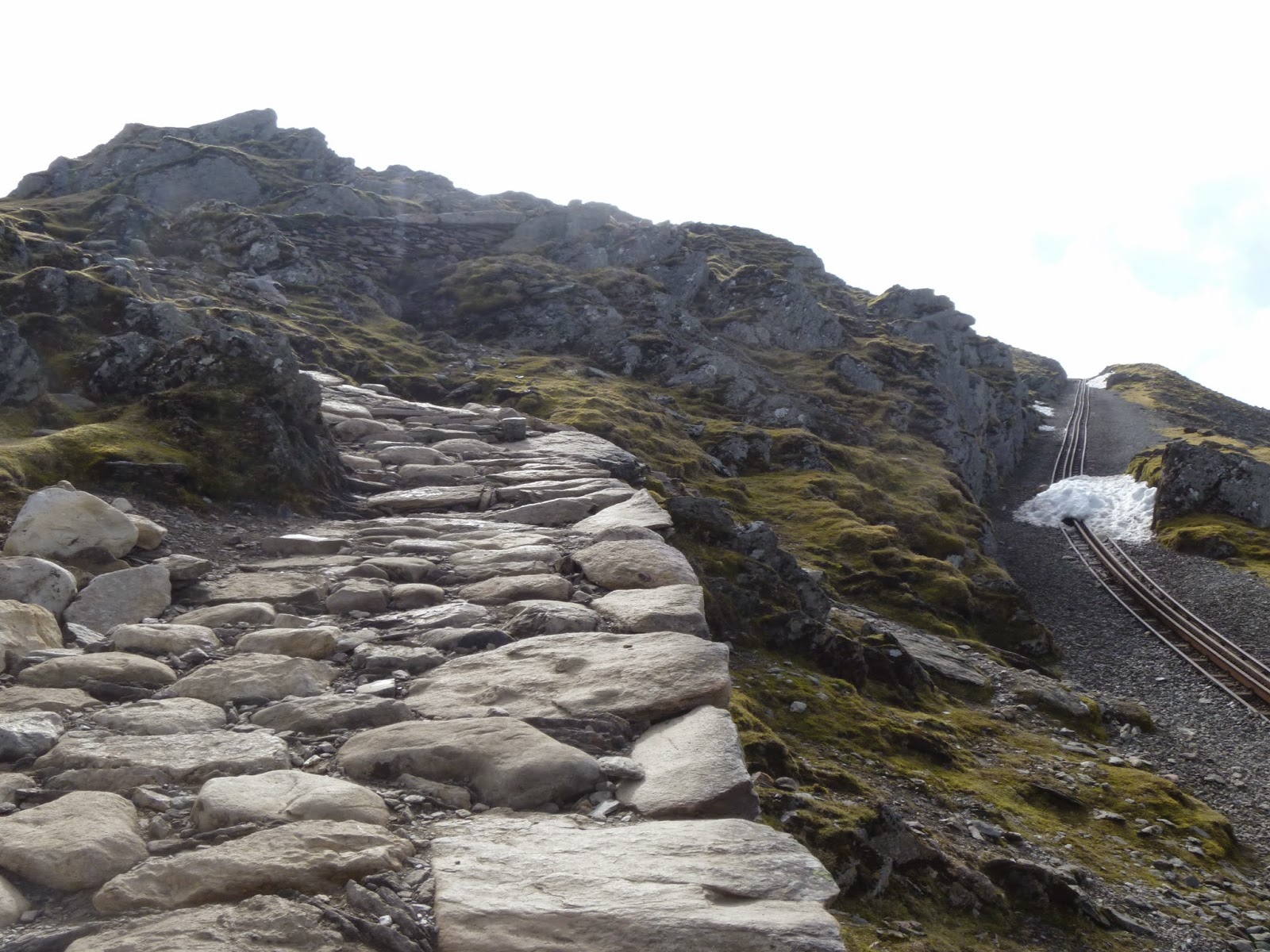 No trains today, by the looks of it! 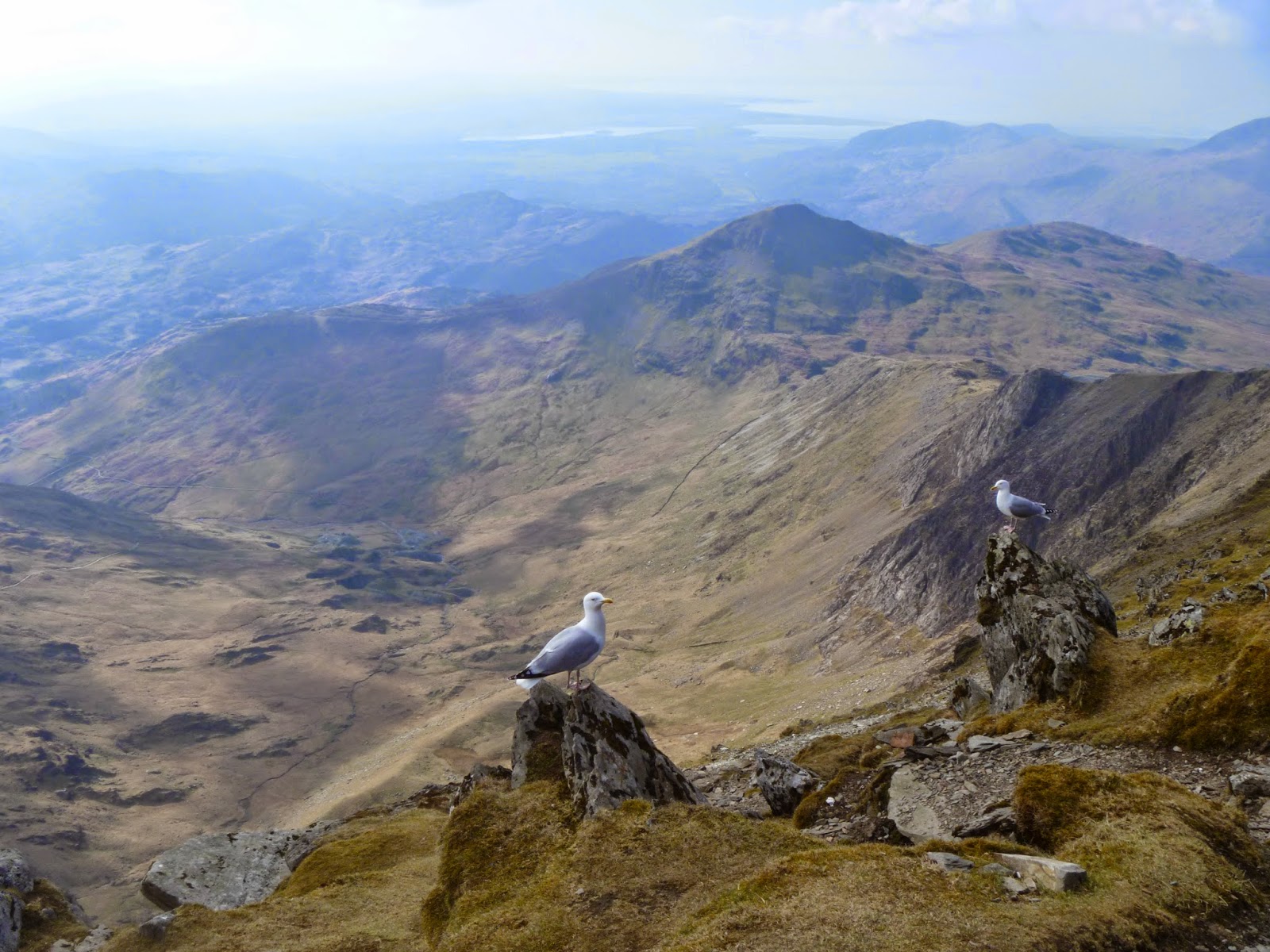 Gate keepers of the path down 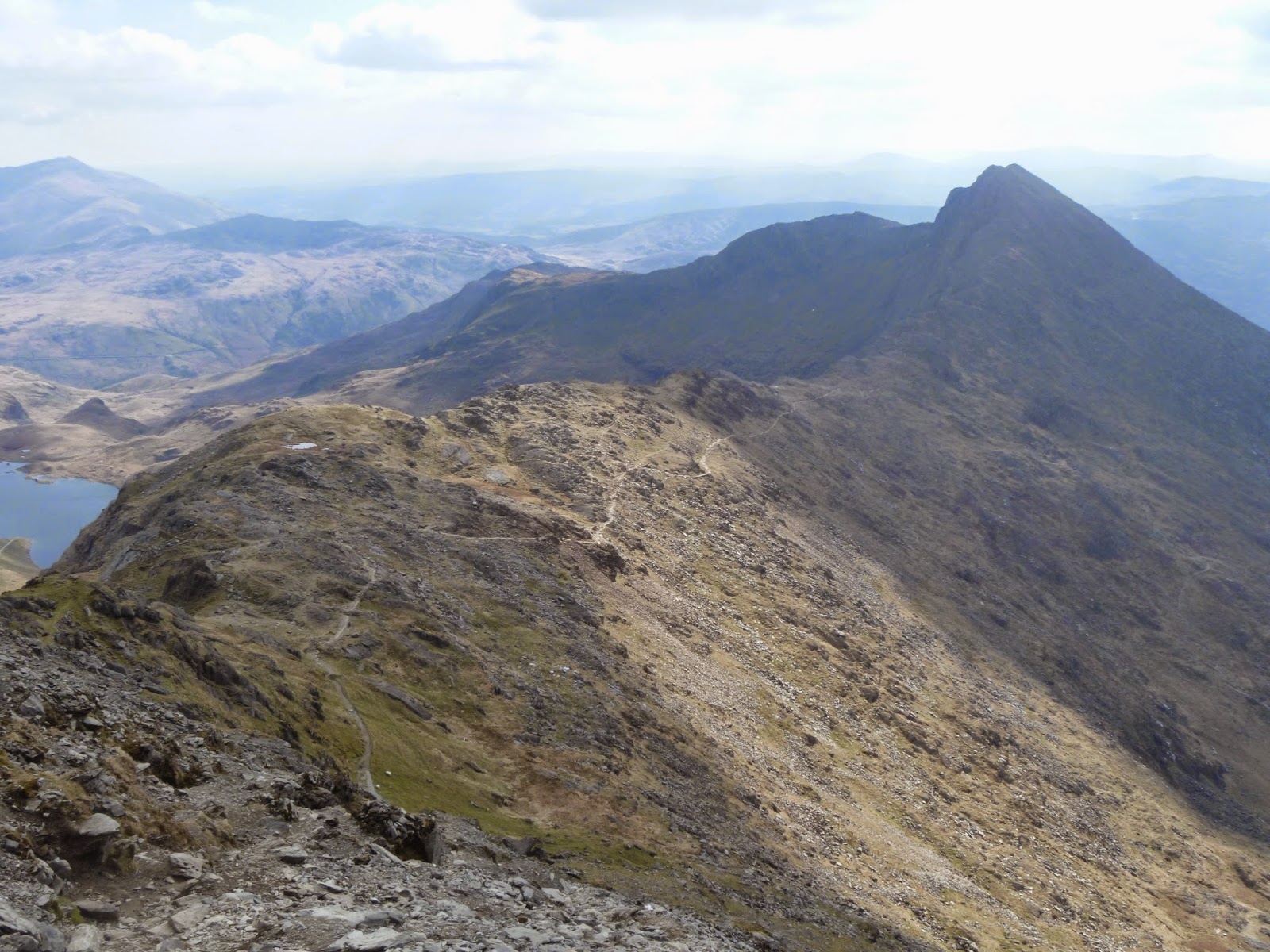 The path over Lliwedd, which I didn't take in the end

Then I came across a family. Did they come from Lliwedd, I asked. No; they had come up the side of the valley. Aha! Another option! I decided to go for that one. A wise choice, I think! It was a nice route, new to me, and clearly quicker than Lliwedd. Soon I was back on the miner's track. And then it's not long before you're back at the car. I was home before 2PM! An efficient day...
Posted by Margot at 08:54