I bought my first pair of running shoes in January 2011 and figured that was it. But when I was in York I bought my second pair, as I had worn the first pair out. I was in York only from June 2013 to late March 2014; that first pair lasted me some three years! But my habit got worse, and I wore these shoes out too. Because I have such a funny gait (I don't run with my feet horizontal, but tilted outward, so I land on the outside of my feet; especially with my right foot) I wear out the right side of the sole of my right shoe in not time. In November 2014 I bought my third pair. And these still work, but I figured I might want to have two pairs of running shoes. A pair of the best and most expensive for long runs, and a cheaper pair for my mundane morning runs. I don't think I need all that technology for these few miles! It is my calves, rather than my shoes, that provide the bounce. If I can't bounce all the way for some reason, I need difficult shoes. So now I've just bought my fourth pair of running shoes! I feel like I single-handedly keep the running shoe business afloat. But that's OK. I wouldn't want to run without! 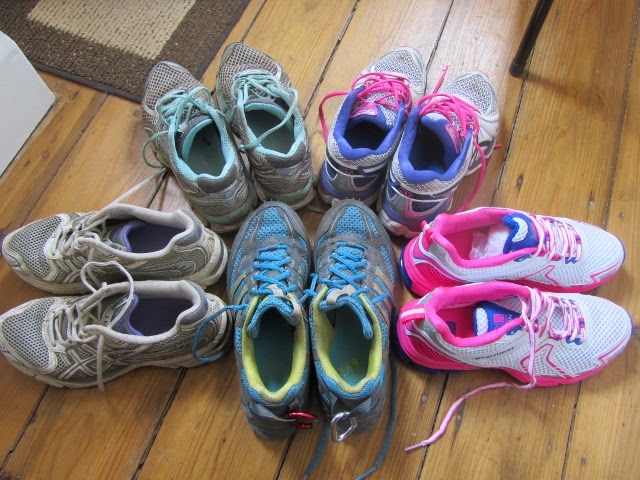 All my running shoes, ever! The ones in the centre are my off-road shoes; I never wore a pair of those out.The rest are all road shoes. And no it's not as if I suddenly think white, pink and blue is such a lovely combination; I pick shoes on how they feel... 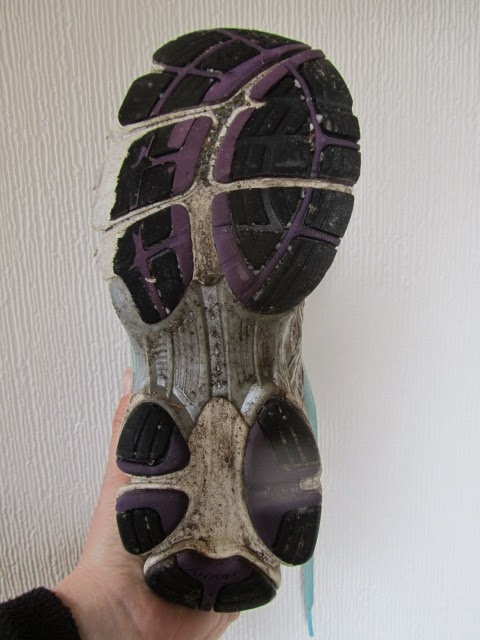 The typical wear pattern on my shoes: the bit near my little toe is totally gone, but the rest of the sole is pretty much intact
Posted by Margot at 09:26