I have reached the stage where weekends and evenings belong to work! But I make an exception for Thursday. I allow myself one short working day, as I think I'd go a bit daft if I never relented. And the underground trip this week was just so very enticing! The last time I had been in this mine, we had ended up concluding our maypole wasn't high enough to reach another level up. The week I'd been in the Netherlands the others had extended the maypole, clambered up, and found a shaft going up even further. Exciting! They had plonked two sections of maypole in the shaft but had run out of time. It would be up to us this week to connect the two pieces, and clamber up, and see what was at the top of this shaft! At least, that was the plan.

First we had to get tese two pieces assembled. Phil clambered up the maypole, got off at a convenient ledge, and placed the connection piece on top. Then I joined him at the ledge, and together we tried to lift the shorter piece on top of the longer one. But we weren't tall enough! 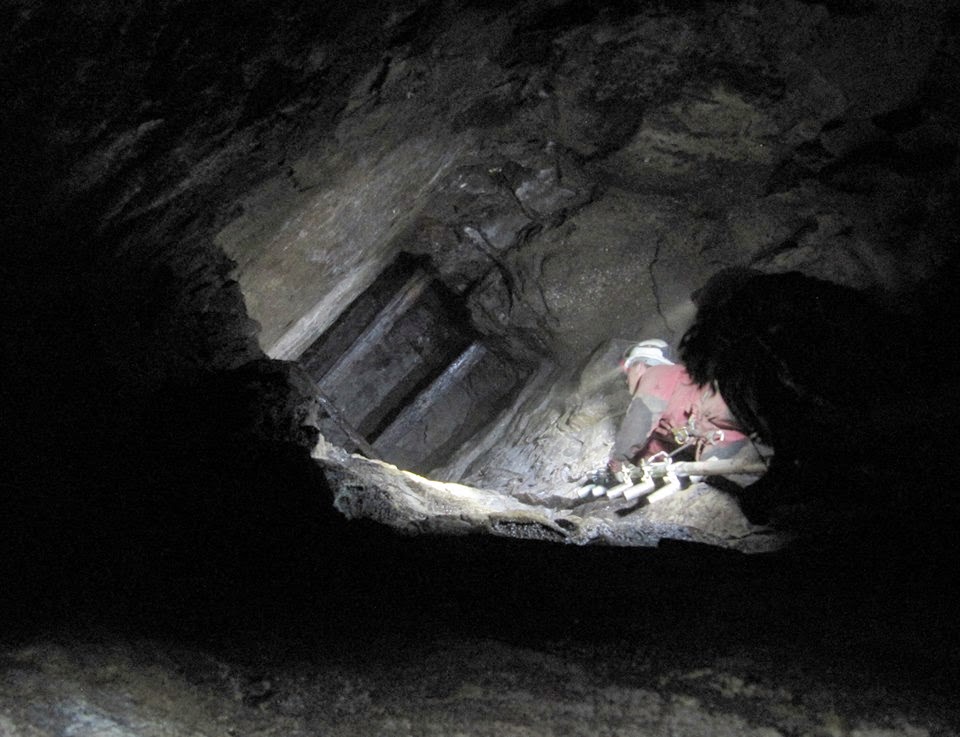 Phil on his ledge, and me below on the maypole. Pic by David.

I went down again, and up went David, who is easily the tallest of the lot. But after a lot of faffing we decided it still wouldn't work this way, and that we should instead lift the long bit on top of the short bit. And that wasn't easy; as it was, the connection wouldn't fit over the top of the short piece, and we didn't have the proper tools to change that. Luckily we had Pingu with us; he is a roady, and can improvise anything with scaff. So he managed, even without proper tools. And then with combined forces we managed to lift the two sections on top of each other and bolt the two together. Time to get up and see if we could get off at the top!

David volunteered, and had a look. One sees coming what he reported back, I suspect: it still wasn't long enough! He could see that there was a level going off, but no way of getting there safely. And all the faffing had taken time. We decided to leave it for next week. The plan is to go to the top of the maypole, drill some holes in the rock, anchor the pole, extend it even further, climb up, get into the level, bolt that too, and then lower a rope. Ropes are a lot more user-friendly than maypoles...

When David had come down Pingu took the opportunity to clamber up and have a look. And when he'd come down I did the same. But I didn't even dare go to the very top! A maypole is a bit bendy, so it tends to sort of asymptotically press itself into the wall as you come higher. And standing on a very high vertical construction that's not fixed to anything is scary: it feels like it will topple backwards! And it probably won't, but I decided to not take chances. And that it leans so closely to the wall that there isn't much space for your toes, or for your hands fitting around, doesn't help either. And when standing still you can fix yourself to it, so if it topples over you won't fall to the ground, but that doesn't help during ascent or descent. And isn't entirely reassuring either. I'll be braver (well, less scared) once that thing is fixed to the wall. But it does mean I hope someone else will be willing to do the drilling. We have several blokes whom I suspect of doing just that without much batting of eyelids, but blimey, that shouldn't be taken for granted. Anyone keen on standing some 15 high on a rickety, un-anchored, vertical structure, fixed to it, but not even holding on to it as both hands are needed for the drill? And then pushing away from the wall, as otherwise the drill bit won't get in? Anyone?
Posted by Margot at 10:33