How many times have I said "six weeks at sea" in my recent blog posts? Enough to make people wince, I think. But it's a hard to avoid term. After a unspecified period offshore I was keen to go back underground. I had the impression from talking to David that it would be quite a nice trip which was lined up for the first Thursday. It was a mine the others had started exploring while I was away, but there was more to see. And I was keen! Even though I was also a bit confused, with still a slightly distorted day-night rhythm and some other confusion.

The Anglesey delegation was early. So early we had time to first stick our heads into a mine on the other side of the road, so we got kitted up. And doing that I noticed my confusion had not been without consequence! I had managed to forget my caving suit. Oh dear. And it was a very windy day, and the trip was expected to be very wet. This would be cold! But what can one do. I just donned my furry suit (at least I had that) and hoped for the best. The first trip was alright; it was modest but pretty, and not too wet and cold. And when we came out, the others started appearing.

We waded into the adit. And soon reached a big hole in the ground with a waterfall pouring into it and a very busily timbered winze next to it. I thought we'd go up the waterfall, but I was glad to see we headed for the winze instead! One of the chaps had free-climbed it the previous time, but this time he'd bring a rope with him, so the others could go up NOT entirely relying on ancient wood. And at the top of that winze we found a few metres of tunnel, with another gaping hole, and yet another winze at the end of it. That was where we would go on! The chaps had brought a maypole with paraphernalia the previous time, and now they'd assemble it. (A maypole in our definition is a piece of scaffolding with some rungs and connectors you can turn into an improvised ladder. We stuck it on a convenient iron pin we found in the wall, and tried to place the rungs so that it would not rotate too much.) And soon the same chap who had done the freeclimbing was up that construction too, which also soon was festooned with a rope for easier access for the rest. 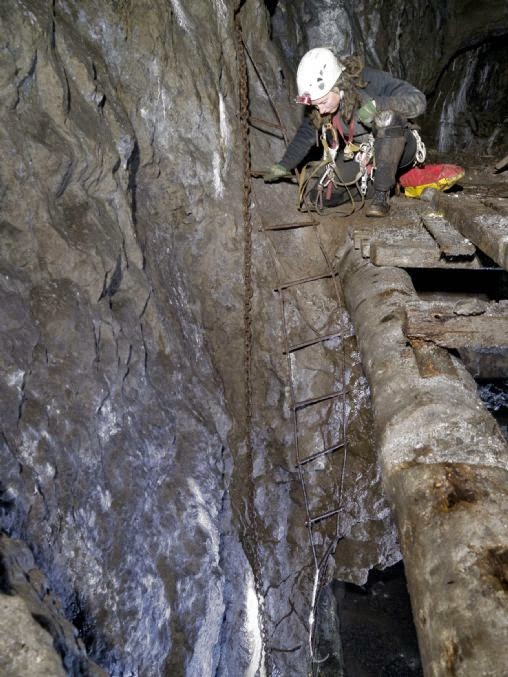 Me at the top of the rusty chain (the iron ladder seemed to be untrustworthy). Pic by Simon 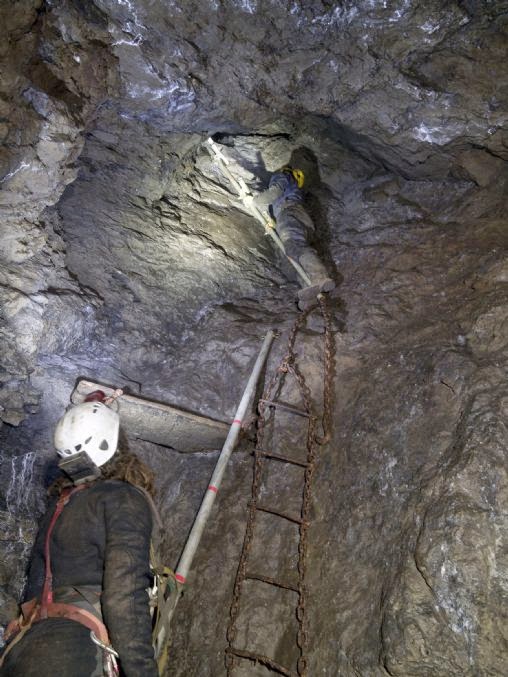 Looking up at Rob the main maypoler who is pushing things further. Pic by Simon

At the top we found not much space to walk around horizontally, but we did see another way up. First along a rusty chain (not up everybody's street) but from there on, a chain ladder that enticingly lead halfway up to the next level. Near another handy iron pin! So the maypole was moved up, an plonked into a new position. Only four of us ventured up. We found another chamber. With another maypoling opportunity! That's for next time. This time we didn't touch the maypole again; one of us had found a way out. From the chamber the maypole got you to, a tunnel lead to fresh air! Or at least freshish; the tunnel had clearly been used as an illegal garbage dump. But we got out without it getting too gross! And next time we can choose which way we go.

When we got back to the cars it was late. I was pleased I hadn't got cold the entire trip! But it wasn't over yet; when we started to get changed, the heavens opened. It really came down in buckets. My T-shirt was soaked before I could put a jacket over it. Cold after all! An not just me. Everybody just tried to get the hell out of there! I don't think this is  a mine with much after-trip pint potential. But one can have a pint any other day!
Posted by Margot at 20:45