If you do a lot of crawling on rock you want good knee pads. What are good knee pads? Those that stay put, and that provide good protection. Unfortunately, I had the impression that whatever you find in the shops does only, at best, do one of these two things. You will find, if you look around you underground, that most cavers/mine explorers have neoprene cavers' knee pads. My experience is that these do neither of the things I want. They won't protect you to hurting your knee if you bang into a rock face when you do a messy abseil, for instance. And they will fall to your ankles within metres from the entrance.

Then there are the kind of knee pads that provide proper protection; they tend to be builders' and gardeners' knee pads, with a hard outer layer, allowing you to kneel on sharp pebbles for hours on end without feeling it. But these are meant for sitting still, overall; try to crawl with these, and they will fall off quicker than neoprene knee pads. I've also tried mountain-bikers' knee pads. Didn't work either. So when I had found out my neoprene ones I had bought were not as good as I wished, and I lost one, I used an old volleyball knee pad as its companion for a while. At least they stay put! I then spent years using either volleyball pads or martial arts pads (which are essentially the same); they stay put, and they are dirt cheap, but they don't have a hard outer layer, and they don't last long in the underground. So I had been pondering what to do. If the commercial world doesn't cater for it, maybe I had to make something myself.

One day I figured what I had to do was to combine the kind of knee braces I use for avoiding or alleviating the effects of flopping my knee inside out, with builders' pads. The medical pads stay put really well, and tend to be made from stuff that doesn't soak up water. And they wrap around; you can easily put them on without having to take your shoes off, and you can keep them loose while just walking, and tighten them when a crawl comes up. So if only they had a hard outer layer stopping the brutal force of an involuntarily encountered large and pointy piece of slate; that would be perfect! So I ordered a pair of both, and waited.

It took a while, but then I had all the raw ingredients. And then all I had to do was combine them! It was quite some work; first I took the builders' pads apart. What of it would I use? I took off the plastic outer bit which was my main interest, and took out the gel bit they tend to have, which is completely superfluous in the camping mattress-padded pads but which they need to call them "gel knee pads" and which makes them sound rather sophisticated. And that would be all I needed! I thought I'd put one layer of neoprene in between. But the hard plastic bits are way too big; I took an inch off on all sides in order to fit them on my knee supports. And had to re-curve them to make them fit around my knee. A lot of work! But some trial and error got me acceptable result. And then I had to sew it on. That meant first melt a bit of a gully in the surface; exposed seams will rapidly wear through. Then make holes for the thread with a hot needle; you don't want to stitch though several millimetres' worth of hard plastic just like that. And then the thick thread comes out! 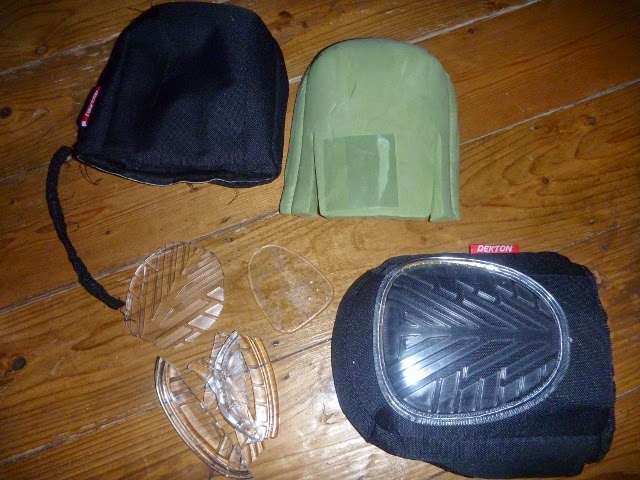 A builders' knee pad on the right, and the same thing taken apart into components on the left 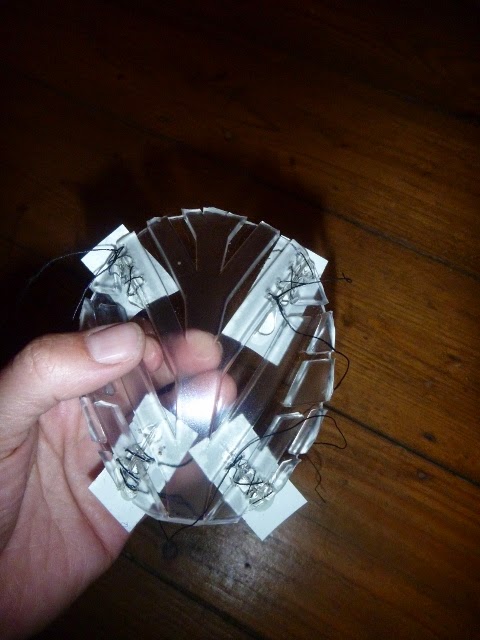 The centre of a hard plastic cap remodelled for underground use; what I did looks quite like medical stitches! 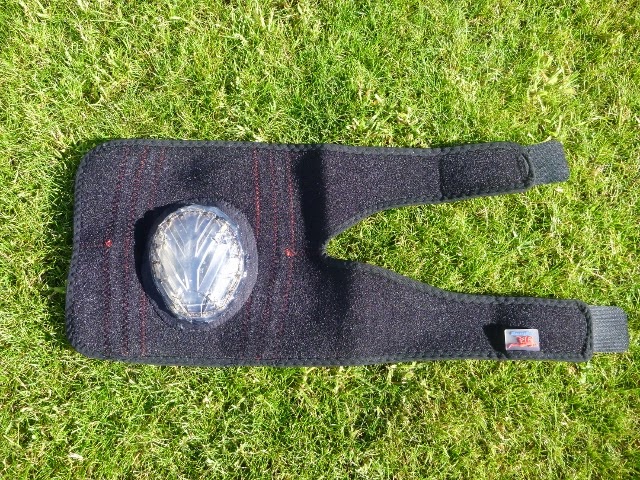 The first one to be finished; only afterwards I noticed I had made it upside down. The bigger strap is supposed to be on top... and I don't think you can wear it that way up as the had plastic would be too high up on the knee 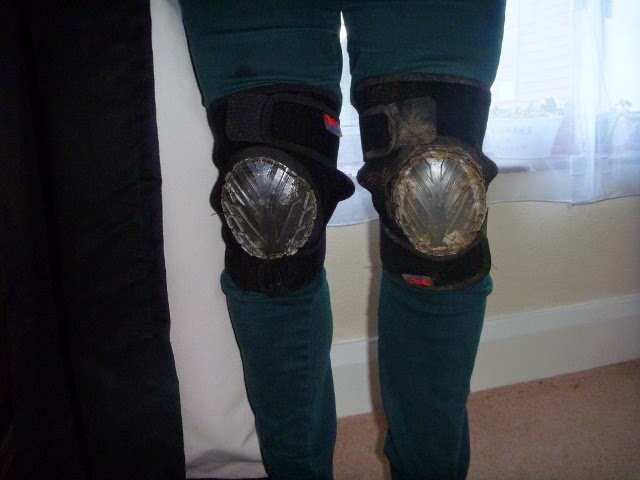 Both finished pads! Guess which one had had a try-out in a mine...

Just before I would go underground on a Sunday one was ready. One would have to do! I had expressed my dismay at Dave that I would, between Laugharne and the cruise, only be around for two Thursday trips, and one would be above ground! Where would I get my underground kicks? So we decided to go back to my first Thursday Nighter venue to tie up some loose ends. And I would try my pads! I knew there was a crawl involved; it would have to be a one-kneed one, but that's alright. When we walked into the rather flooded adit I was happy to feel my one pad not shift a millimetre. And during the crawl I was very to happy that was still the case! And the pebbles and cobbles I was crawling over had nothing on me with my snazzy pads. Excellent!

That day we didn't linger; I was home before three. So before the sun was under I had finished the second pad. Any underground exploit that now beckons me, I'm ready for! And I was even so enthusiastic I decided I should do something similar for my elbows... not quite sure what hard outer layer to use for that, but I'll think of something! And once that's done, I'm the best-protected mine explorer in the realm. Providing my handiwork lasts! But only one way to find out...
Posted by Margot at 12:17

Skateboarding / ice skating elbow pads? They have a hard outer shell and are meant for you to be able to move in them. http://www.skatewarehouse.com/elbowpad.html

Tried these too! Problem is that these tend to be riveted on (if that's the word)and that's fine on a bike, but doesn't work underground very well. They snag! I really wanted something stitched on.