NB; this is a catch-up blog post, about things happening before the cruise, while blogging about the cruise has already started. This was a trip the weekend before the cruise; maybe not in the correct chronological position but still worth documenting!


You can’t get everything right the first time around. Last year, the YCC went to Coniston to visit the copper mines there. Due to unfortunate and avoidable circumstance, we had nobody with us who had ever been there before. And that made things hard! We had thought of doing a trip from high up, down a number of pitches, and then coming out at the bottom. But on a trip like that, you take your ropes with you, and you only want to do that if you are sure you know your way out. And we didn’t! So we pootled around in the higher levels instead. It was fun, but we sure did want to do a trip there again, and this time all the way. So this year we had a retry! And this time, we had swarms of people who knew the way. That made things easier.

When I drove up I was more keen on seeing the good old YCC again, rather seeing the mine again. It is a lovely bunch of people! So when I got there after a fairy long drive, I was very happy to give both Matt and Gary a big hug. Good to see them again! Way too soon I grabbed a beer to wallow in their company. I should have had tea after that long drive! But you know how such things go. The evening was merry (and festooned with weird events- but more about that in a later post), and the night was moonlit. Many set off on a nightly walk. It looked great! I love moonlight. But I was aware of next day’s trip and the upcoming cruise, so while disparaging comments about lightweights flew my way I was the first to go to bed. And that turned out to have been the right decision; I later found out the walker had not gone to bed before 3AM. I had not even noticed them coming in! I was long gone. I did wake up during the night (one of my earplugs had fallen out), so I could hear the harmonious snoring of two of the men. And the next day I woke up with a headache. Oh dear! Not enough tea. 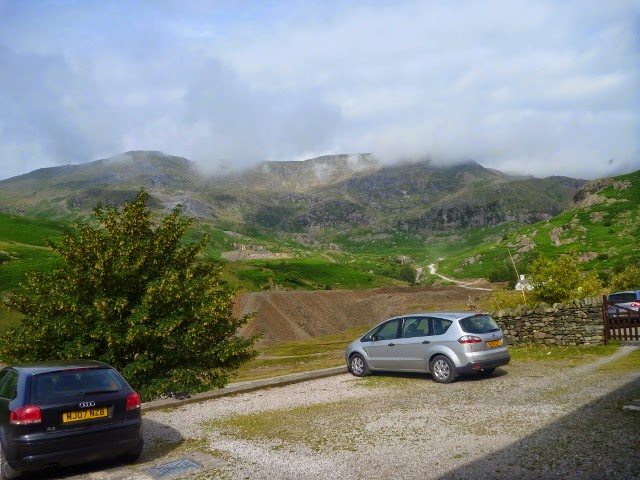 The view from the hut

We had breakfast and while Rich and Rich went on a heroic run, all others faffed a bit; it was late in the morning before we set off. It was already hot! Most walked up the hill to the entrance bare-chested. We were glad to go underground! 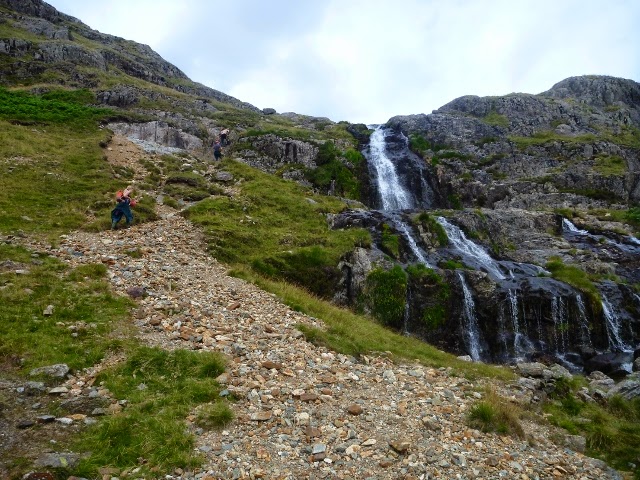 It is a bit of a faff to get 12 people down a pitch. But well, we weren’t in a hurry. And it is a pretty place! The vertical is astounding. And there was a lot of nice staining! Rich also rigged a pitch down a dead end, as there was a nice wheelbarrow to be seen there. There also was the wonkiest ladder in the world leading up to a chamber higher up, but I let that slip. Headache + thoughts of upcoming cruise = risk avoidance! 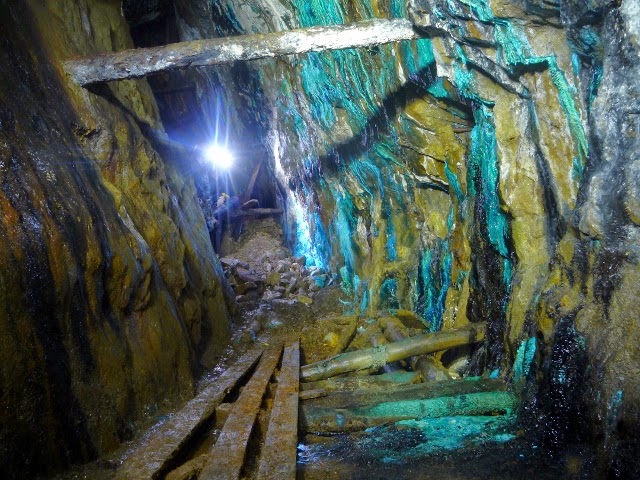 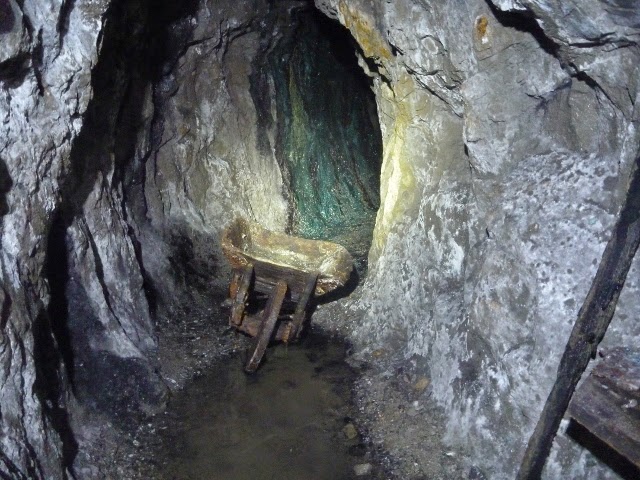 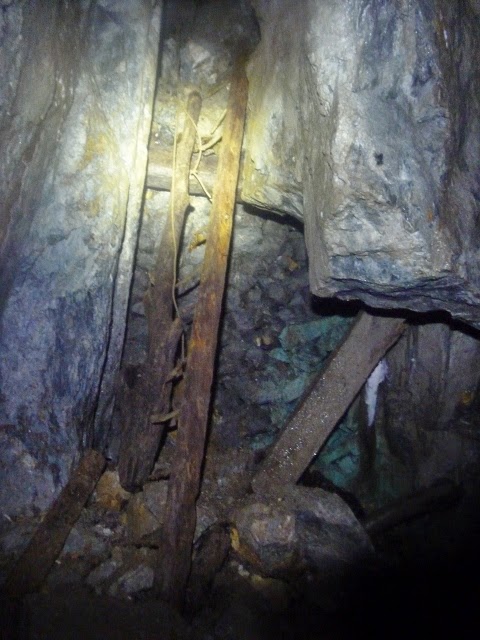 The wonky ladder I decided not to ascend 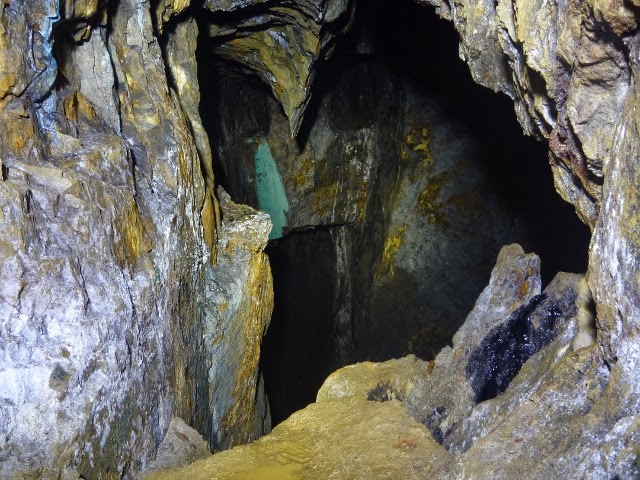 The big chamber above the wonky ladder, seen from above. The level I am standing in seems to have once extended all the way to the other side (the level the blue staining drips out of). Slightly scary!

There was an instance of near death too, when one of the chaps accidentally kicked loose a rather large rock at a very unfortunate location. But it missed, so we all came out happy and healthy! Not in one go, though; some got impatient and just stomped to the exit. When we came out, they were already in civilian clothes and looking clean. But we had the key of the hut! They must have been skilled burglars. We then walked down too. We could have looked into another adit, but I didn’t feel much like it, and those who had been drinking till 3AM sure didn’t either. So we spent the rest of the time drinking tea and relaxing! (And having an ibuprofen - I should have thought of that before!) Quite nice. And rather early we went to the pub, for a few pints and a meal. It was great! It was an impressive blend of YCC, CMHS and NYMCC. A varied group! But most of us were tired, so we didn't linger. I think I was the first to go to bed the second night too. The next day I wanted to leave at noon, as I had to pack for the cruise. That didn't leave much time for underground fun! But some, at least; I scampered off with Rich while the others went on a proper explore. I've seen pictures; they have seen beautiful places! But our small walk was nice too. And after a last cup of tea I drove off. Time to pack six weeks worth of luggage! 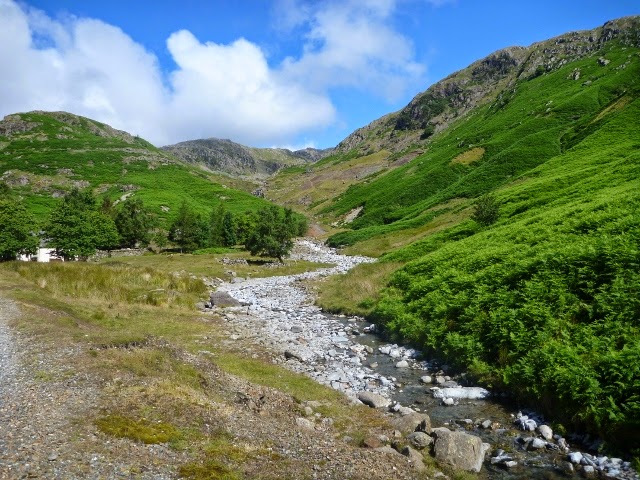 We walked up a lovely valley... 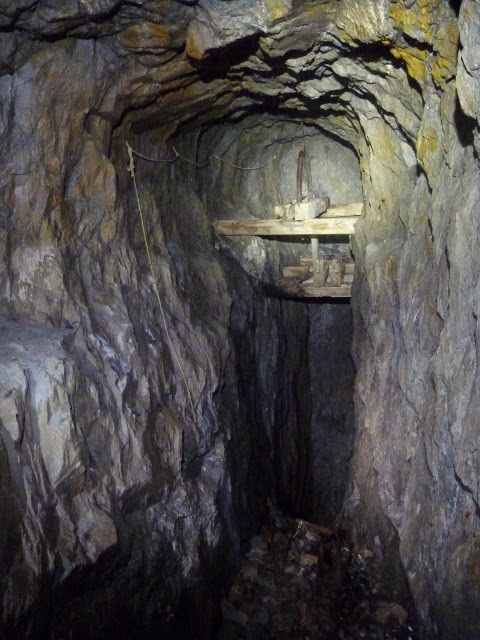 And saw some enticing underground stuff!