NB; this is a catch-up blog post, about things happening before the cruise, while blogging about the cruise has already started. This post relates to the Coniston trip the weekend before the cruise; maybe not in the correct chronological position but still worth documenting!

With mine explorers you know what to expect. Mud, sweat, precarious false floors, lots of banter, late nights, lots of beer. And that’s fine! The more intellectual part of my brain gets its kicks at other times. When I’m out with the YCC I expect rather civilised banter, but when the NYMCC gives acte de presence too, I just harden my skin and expect to stand out like a sore thumb with my pronounced lack of rowdiness. But sometimes, I have to rapidly adjust.

I had written about the weekend in the Lakes District, visiting Coniston Copper mines. On the first night, all were busier catching up and drinking beer than pondering the mine. And things did get a bit rowdy! And I was holding my ground amidst the boisterous. But then one of the guys brought his phone out, and started showing people some porn that seemed to even be rather disturbing by porn’s standards. Luckily, even the more uncouth of the men respect anyone’s couthness (that word should exist), so nobody expected me to want to see that, and nobody tried to change my mind, or even lure me into seeing it by deception. One chap figured it would actually be best to remove me from the scene entirely, and he whisked me away to the lounge. There he suggested to do some drugs. I know this is a rowdy bunch, but I wasn’t buying into that. He surely was pulling my leg! But he did whip a small sachet of white powder out. I still wasn’t having that. It could be anything! And when he saw he wasn’t fooling me he told me what it really was. It wasn't anything I could have seen coming.

It was a bit of deep sea ooze, collected by the crew of the Challenger. The Challenger! The ship that started oceanography! The ship that sailed from 1872 to 1876, went all around the globe, and sampled and measured more than you can shake a stick at! If I find a foram  in one of my samples which I don’t recognise, the first source I still turn to is the Challenger report! That is such a thorough piece of work it has never been surpassed. And one sometimes needs additional material, but the Challenger set the standard. I don’t know how many non-ocean sciences nerds know about the Challenger, but within the community this trip is more famous the one to the moon. 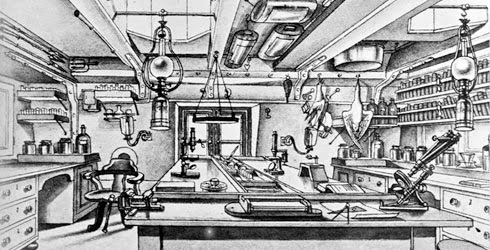 A lab on the Challenger
Posted by Margot at 05:14