It would all start with a piston core. Our ship had a vibrocorer and a piston corer on board; the former is a big construction with a tub on top, filled with water. As soon as it’s positioned on the sea floor, some mechanism makes the ~1000 kg of water move around, creating the vibration needed for pushing the barrel into the sediment. It’s the sort of equipment you need when you core close to to land; the sediments tend to be rather stiff, and won’t go into the barrel without some vibration-shaped convincing. The piston corer pretty much is just a steel barrel, with only a big weight on top to make it sink into the sediments. The piston helps these to penetrate deep into the barrel, but all is limited by how deep the barrel gets into the sea bed to start with. But we would kick off on the continental slope, at ~500m depth, so although we would probably only take one piston core, it would be the very first one. The piston corer is deployed 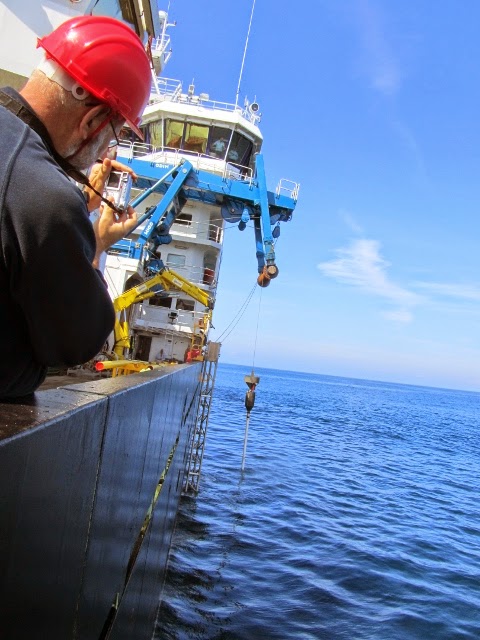 It comes up again, under scrutiny of James

We had been on shift since midnight. It had been the first shift; we had all tried to get some sleep before going on duty, but with our bog standard circadian rhythms, few of us had managed very well. We were all very sleepy. And we wouldn’t get to the coring site until after breakfast. So we had a rather boring shift; we looked a bit at the geophysical measurements that were coming in in real time, but otherwise we just read books or picked our noses or pootled around. And we yawned an awful lot. But then, at ~10:30AM, we finally had a core on deck. We could snap into action! And so we did.
It was the first core of our shift. Most of us have done cruises before, and have an idea of how things are done. These ideas are not always the same. And those who hadn’t been on cruises before were a bit uncertain of things. That first core therefore turned into a bit of a whirlwind of contradicting opinions and commands flying around. And it was after we all had been on our feet for pretty much 27 hours, so both on both the distributing and the receiving end of the suggestions (let’s call them that), moods were frayed. I have experienced more pleasant bursts of core handling. But we got it done. And then our shift was over! 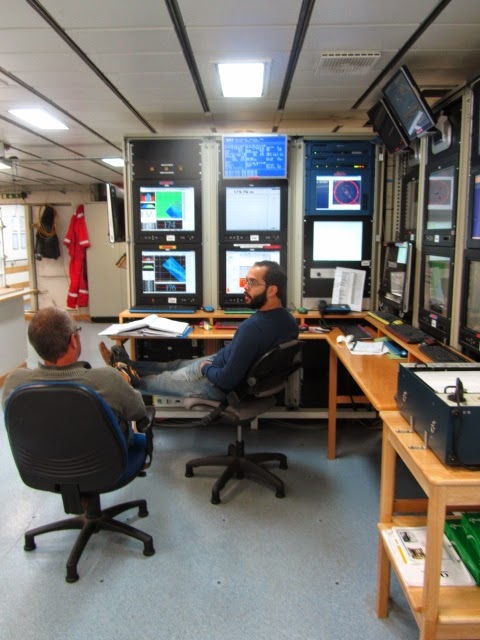 The next shift we got to finally handle vibrocores. It’s a very different mechanism and quite different for the technicians operating them, but for us it’s pretty much the same procedure. And after a while we got into a routine! And that made things a lot better. We pretty much found the optimal way of doing things, and just did it. We were still tired; you don’t turn your day-night rhythm upside down in only 48 hours, but we now worked as a team, and not as a bunch of grumpy individuals. So from the second shift on, core handling became fun! And that’s good; 1.5 hours of lousy shift is a more than acceptable sacrifice for weeks of pleasant work. And of course there still were hiccups; sometimes people forget the distinction between best practice and personal preference, but it all stayed within limits. And it’s quite satisfying to cut cores into sections, label them to within an inch of their life, split them, describe them, and put them away in a cooled container. We got a few boring cores with pretty much only sand, but we also already got a few beauties, with what surely looks like glacial sediments in the bottom! Exactly what we’re looking for! 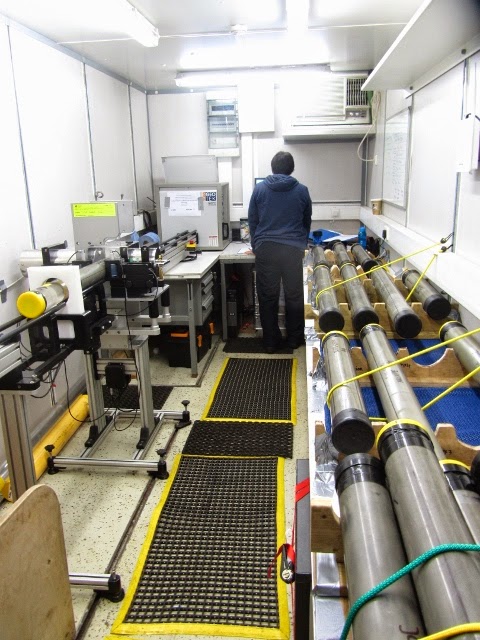 The cores as they lay acclimatising in the core logging container. Elke, the logging expert, didn't want to be in the picture. Not with her front, anyway. 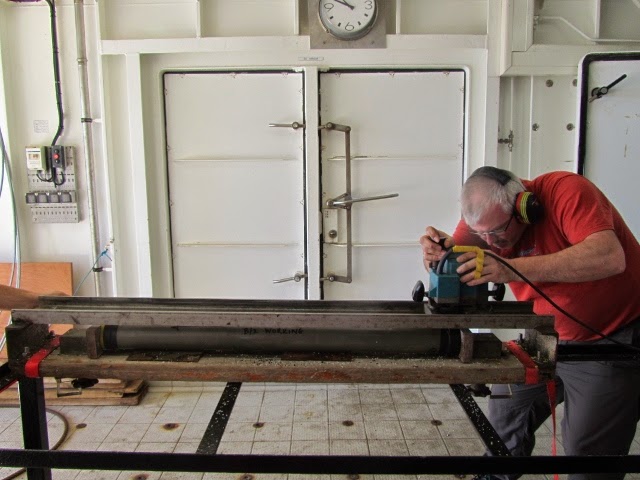 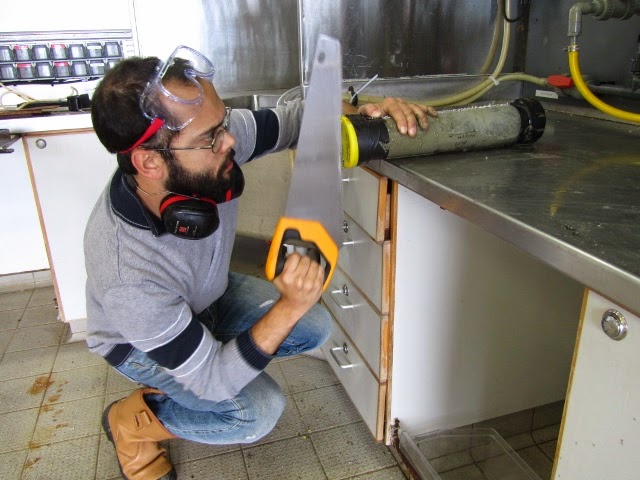 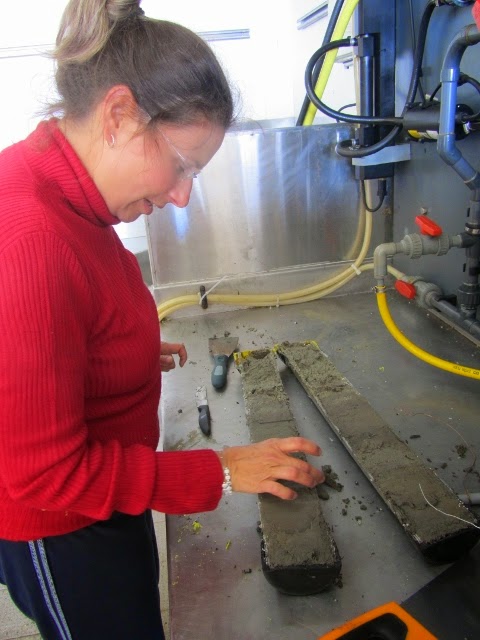 Sara Benetti has just split one, using a cheese wire and some pallet knives, and gets a first glimpse of the full sediment 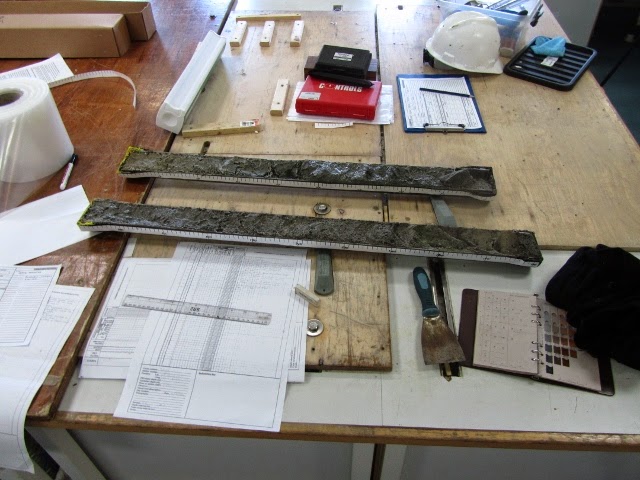 A core ready to be described. Once that's done, we're finished with it as far as the cruise is concerned! All other work will happen on land.