I was in Laugharne, on fieldwork. I would be coming back late on a Thursday afternoon. Late on a Thursday afternoon! Normally, that's when I team up with Dave on the School of Ocean Science, where we plonk our kit in the car of choice and drive off towards the great underground. Not this time! I was home later than the normal meeting time, I was tired and hadn't had dinner, and the next day there was still a lot to do. I regretted that; what we (they!) would be up to that night sounded interesting. It had both swimming and rope work in it! My favourite! But the next day I heard they had in the end not needed the rope, and the swimming hadn't got them anywhere, but they had enjoyed the activity in itself. And then they thought, well why not do more of that. It's summer! Why go underground. Let's enjoy the sun! But of course, it doesn't work that way.

On the very first day of rain and gloom after weeks of blazing sunshine the standard Anglesey delegation of Dave, Paul and me drove to Llyn Padarn, the lake next to Llanberis and Dinorwic Quarry. Dave had managed to tie two kayaks to the roof of the car and plonk an inflatable dinghy in the boot; once there we would meet Phil, and Simon with his inflatable double canoe, and whoever else with whatever else who cared to show up. And that boiled down to Simon and his canoe. He was late. By the time he appeared we had concluded the dinghy was terribly punctured, but the kayaks we spiffing. But these only seated two! I jumped into the one that was too small for Dave, and Paul had a try in the other one. He had never kayakked before! But he liked it. And I had not had high expectations of the other one as I am not too fond of river kayaks, which I think this technically was, and as Dave had accused it of causing sleeping legs and thus instability. But it was a nifty little thing! 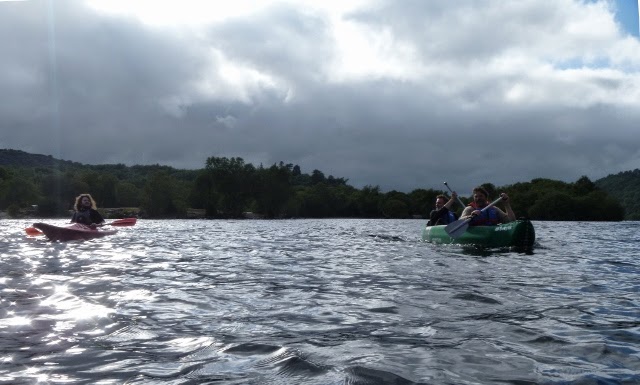 A chase under menacing skies. Seconds after taking this picture I had been rammed! 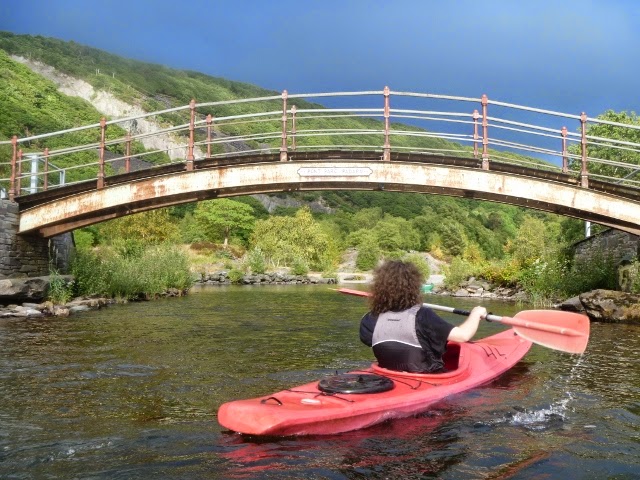 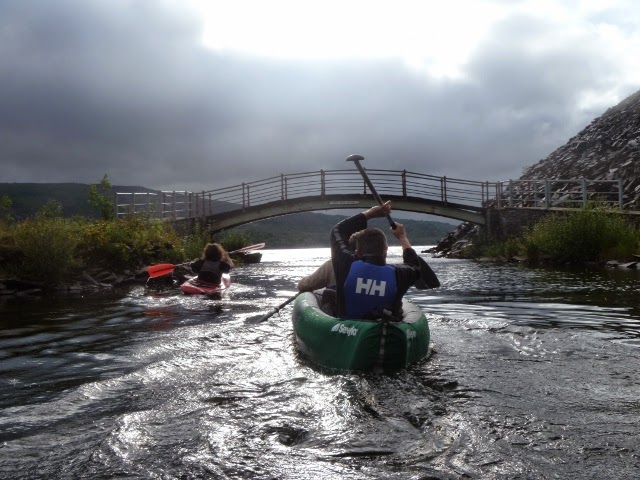 And another wild chase, back under the bridge


When Simon appeared we all went onto the lake; Simon and Dave fit in the canoe together. A daft dash over the lake followed. It was more dodgems than kayakking. But we had fun! After thus having chased each other over the gusty surface we returned to see where Phil was. Nowhere to be seen! But it was time to do a change-over; I tried the canoe (only canoed twice before, in the UK and USA, and never in an inflatable) and Dave got his kayak back. And later Simon tried a kayak while Dave swam. But by then we were all rather looking forward to the pizza which was part of the plan, so we lifted the vessels out of the water again, deflated what needed to be deflated, and changed (those who needed to and could - Simon and Paul had chanced it and gone onto the water in their everyday outfits and hadn't brought a change). And the pizzas were good! We shouldn't make a habit of this; splashing around in water is fun but it doesn't have any of the eeriness and historical poignancy of the underground realm. But it was fun!
Posted by Margot at 09:23