A day in the life of a cruise scientist


So what does it look like, a day on board? My day tends to start around 11PM. I get up, I have some breakfast, I might have time to check my emails, and then it’s time to go to the main lab, for change-over from day shift to night shift. Colm, the cruise leader, will keep us up to date of what’s been happening during the day; what cores have been taken, how it went, whether there was anything worth mentioning on the geophysical observations. Then he’ll us what the plan is for the upcoming 24 hours. The day coring team will tell us where they got to, and whether they refined the procedure of core processing. And then we’re go! 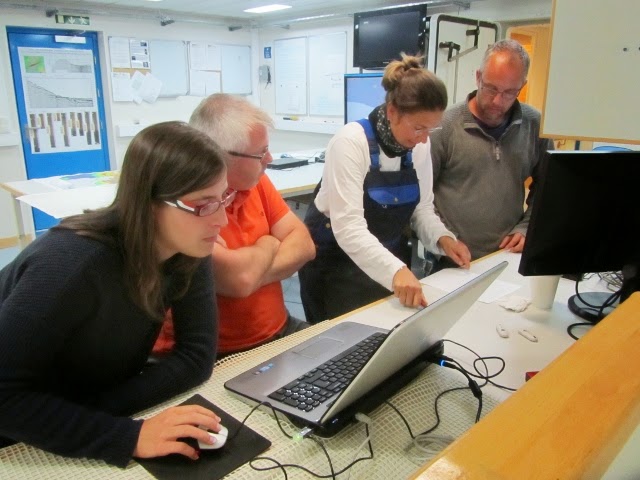 We, the night coring team, are Sara Benetti from Ulster university, Kasper Weilbach from Durham university, Riccardo Arosio from SAMS, Richard Chiverrell (who is part coring team, part geophys, part outreach) and me. And sometimes we get a hand from the leader of the night geophys team: Fabio Sachetti from Galway, who happens to also be married to Sara. So we have 4 nationalities (Rich is English; Sara, Fabio and Riccardo are Italian; and Kasper is Danish) in the team, including a token Brit.

We might be dealing with cores as they are coming on deck, or as they are coming out of the core scanner. The core scanner requires cores to be at room temperature, so when a core comes on deck we cut it into sections and label it, and then leave the sections in the core scanner container. They need to equilibrate for 6 hours. The core scanner lady, Elke Hanenkamp from Leicester university (and a German; yet another nationality), works from 6AM to 6PM, so quite often, we suddenly get very busy after breakfast, when she starts churning out the cores we put in the container early in the night. These are ready for scanning when she finds them in the morning. When she’s done with them, the real work starts! We can get a core from deck into the container is some 30 minutes, but the splitting, photographing, measuring, final labelling, describing, and packing takes a lot longer. And there are periods when we’re just in transit, and all cores are either in the core storage because we’re done with them, or in Elke’s container. And then we just hang around! We keep an eye on the geophys, we catch up on emails, we eat or read something, or we even sleep or go to the gym. If there is a sufficiently long period of non-activity, such is OK! I hit the gym at 4AM during my second shift. 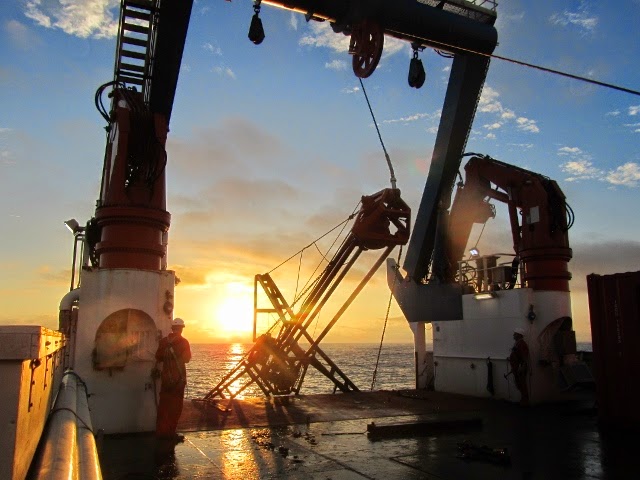 Somewhere around 6AM we tend to get hungry and go up to the mess for some food. The crew saves a meal for everyone who had not shown up at dinner time (and that includes the entire nightshift; we’re asleep at that hour) so we can go up, shove it in the microwave and have, say, steak at 6AM. But not everyone’s stomach is ready for a heavy meal at such an hour, so these just eat some toast or fruit or whatever tickles their fancy. 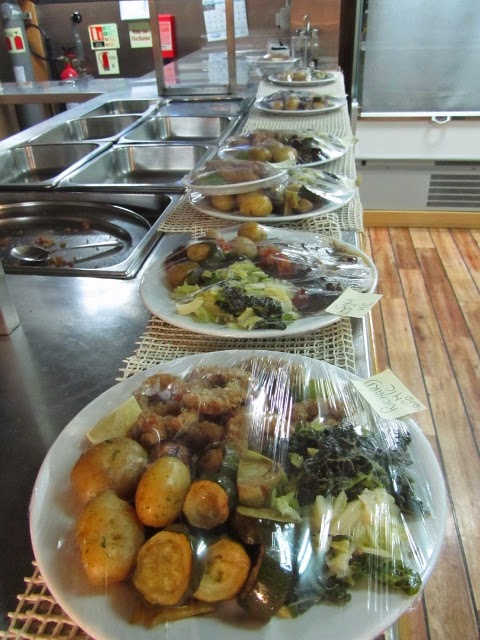 The evening meals saved for the night shift. This is not good food for when you've just woken up; I tend to let my stomach get into the mood for some 6 hours


The busiest time tends to be after breakfast; Elke’s shift is 6AM-6PM (we seemed not to be able to afford two core logging experts), so cores start coming out of her lab, ready for processing, from around 7AM. And then she churns out the spoils of the entire night, so we tend to keep running all the way to hand-over at noon. So then the cycle repeats itself; we brief the day corers, Colm briefs everyone, and work continues. 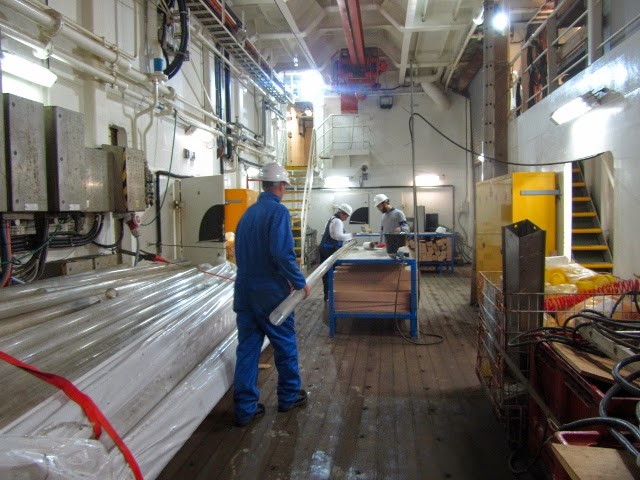 Carrying a core liner to where we cut it

We then go for what the ship calls lunch but which is dinner for us. After a few days Riccardo had the bright idea to buy a bottle of wine as accompaniment. Brilliant! The day shift is not allowed to drink at that hour, but the night shift is. And as I write this, that has been the only alcohol I’ve had since we set off! I may even be getting healthier here. The exercise is not how I like it, but it’s enough; the food is good, and my drinking habits have clearly improved.

After dinner I tend to check emails once again (by that time the rest of the world is awake too), and then my eyelids start to droop and I return to my cabin to crawl into my snug bed and listen to the sounds of the ship and the water. And then at 11PM the alarm goes!