Laugharne: sisters doing it for themselves

The first day of the micropalaeontological work in the field started at 4:45AM and ended at 7PM. I was tired then. As one may expect. The next day, the tide was low about an hour later, and we had seen that the tide does not get too high for a while after low water, so that day we had a lie-in and didn't assemble until 6:15. Let's see if this group of students would do better than the previous one! James promised tea and biscuits for every student who would have picked 50 specimens by 3PM. It seemed to help a bit! 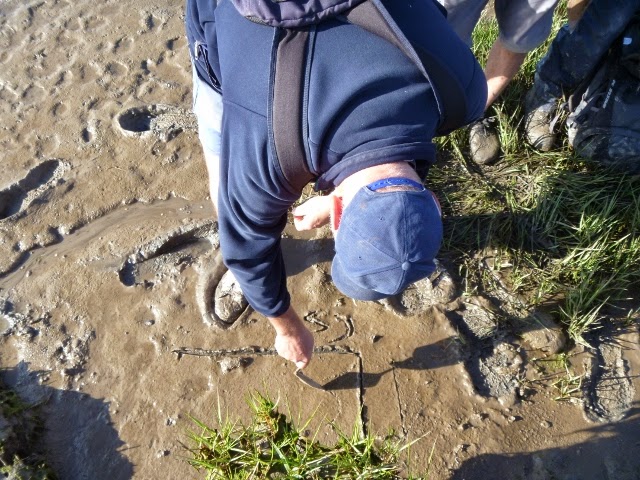 When students had 100 specimens we would look through their sample, and give them some examples of forams they had many of. That way they could compare, and check which ones they had of these species. We had loads of documentation to help them with the others.

This time the first student had 100 was a lot earlier than the 5PM of the previous day. But unfortunately, he wasn't the quickest when it came to identifying them. He was even surprisingly fundamentalistic about it; if he had some wrong, he would rub out ALL his identifications and start afresh. That way he sometimes wrongly identified some the second way around that he had had right the first time; one could see this is not speeding things up. By the time the last student left it was 8PM, and dinner was imminent. Another 14 hour day! And that was the last day James and I would do it together. James had to go back, and prepare for the upcoming cruise. A lot of work and responsibility on my shoulders!

That next day I would have six students. That is very many! We only have five sieves and two hoses for sieving, and if they all have taxonomic questions at the same time they can sometimes have to wait a while. But I wasn't all alone! One of the PhD students offered to come with me. It helps a lot, especially when you have the students sieve, stain, clean, stain, clean again, filter, and spread out their samples; ideally, you have a pair of staff eyes on all of that, but it's a bit much. She was also good at helping the picking, but when it came to identification she sometimes had to refer back to me. I think this fieldwork was the only experience she had herself! But it was great she helped out. 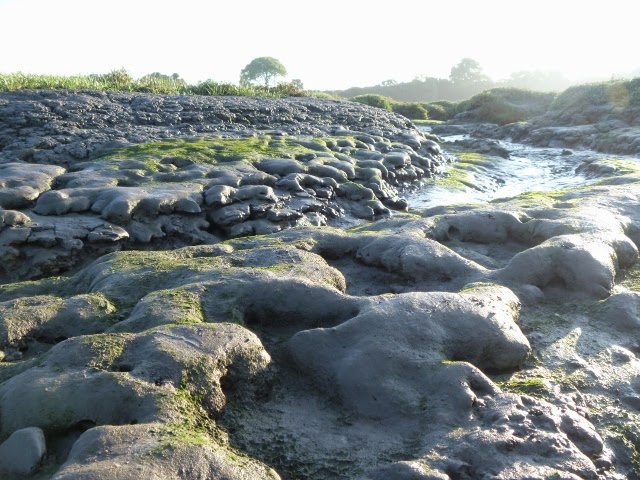 The until recently eroding marsh edge

The mood got a lot better in the afternoon, when I had expressed my surprise at the fact that no student had used their phone of tablet as a radio during the analysis. It's nicer with music! They didn't make me repeat that; soon one of them had his laptop out. And to my pleasant surprise he had a very old-fashioned taste. It started with Adam Ant, and included David Bowie, ABBA, the Clash, and whatnot. Very nice! We'll forgive him for the Wurzels. And it was great he also had Madness, but that is music which is hard to combine with microscope work.

One of the girls had done some foram work before, and she was the first to finish, unsurprisingly. One might imagine she didn't know how fast she should run away and start quaffing beer in the sun, but she didn't. She hung around, making tea and toast for the others! Doesn't that restore faith in humanity. And the chap who played the music also stayed until the last one was done. Aren't they lovely!

Finally, again at around 8PM, they were all done. My first day as the head supervisor was done! The day after I would have a day off (read: I would have to put the results of the earlier days into excel), the day after that I only would have two students, and the day after that we would be coring. And then two more days with 5 and 4 students, respectively, and then the micropal work was done! It would be a fairly heavy time. Especially with low water in the late morning; if you really can't get into the field before, say, ten, you can't start picking before something like 3PM, which means you can't get it done before dinner, and you have to come back afterwards. Which will be awful!
Posted by Margot at 10:30