I think I overdid it a bit. I mended a considerable gap in my wetsuit by stitching a patch on the inside, and gluing one to the outside. One patch would probably have sufficed! But that's Captain Hindsight talking. Maybe it was a bit too much, but at least that big gash was now repaired. Time to try the suit out! And try myself out, too. For what?

My office mate Paul had accidentally drawn my attention to a triathlon. It sounded like fun! So I suggested we'd participate in one, which he thought was spiffing. I looked up if there were more such events. And there were! Late June had one in Llandudno. There were two options: swim 750m, bike 19km and run 5km, or do roughly twice that. I am a very slow swimmer and my best bike weighs 20kg, but hey, it could be fun. At least running 5 or 10 km is something I can do without thinking too much about it.

I later found out Paul hadn't been serious. He mentioned he can barely swim and bike, and has a gammy leg. Doesn't sound like a winning configuration for a triathlon! And I had no idea how much 750m/1500m swimming really is. I rarely swim large distances! And if I do, I have no idea how large the distance's been. So I decided to look for a 750m lake. An excellent way of getting an idea of what one's expected to do in Llandudno!

I decided to go back to Cwm Idwal; it's close to the road but far enough to feel nicely remote; it's beautiful, and it's about 800m long. Good! I made sure to also pack my neoprene socks, shoes and gloves. It could be cold!

I found a parking spot a bit further along the road (it's a very popular spot!) and walked up the hill. At the shore I changed into my wetsuit. I felt the water; maybe gloves weren't necessary. I left a note on my bag (modern society is positively paranoid about left bags) and stepped in. And out again; let's have these gloves after all! Then I set off.

After a few tens of metres I figured 750m was probably a bit ambitious. I can keep swimming for quite a while, but I'm just dead slow! I figured the finish would be closed before I'd be out of the water. So at least I know. No triathlon for me! Even though one can do it in a relay team. I'll do the running, then! Is undoubtedly what I'm least bad at, although I could imagine I wouldn't be too bad on the bike either, were I to have a road bike. But where would I find a team mate to do the swimming? 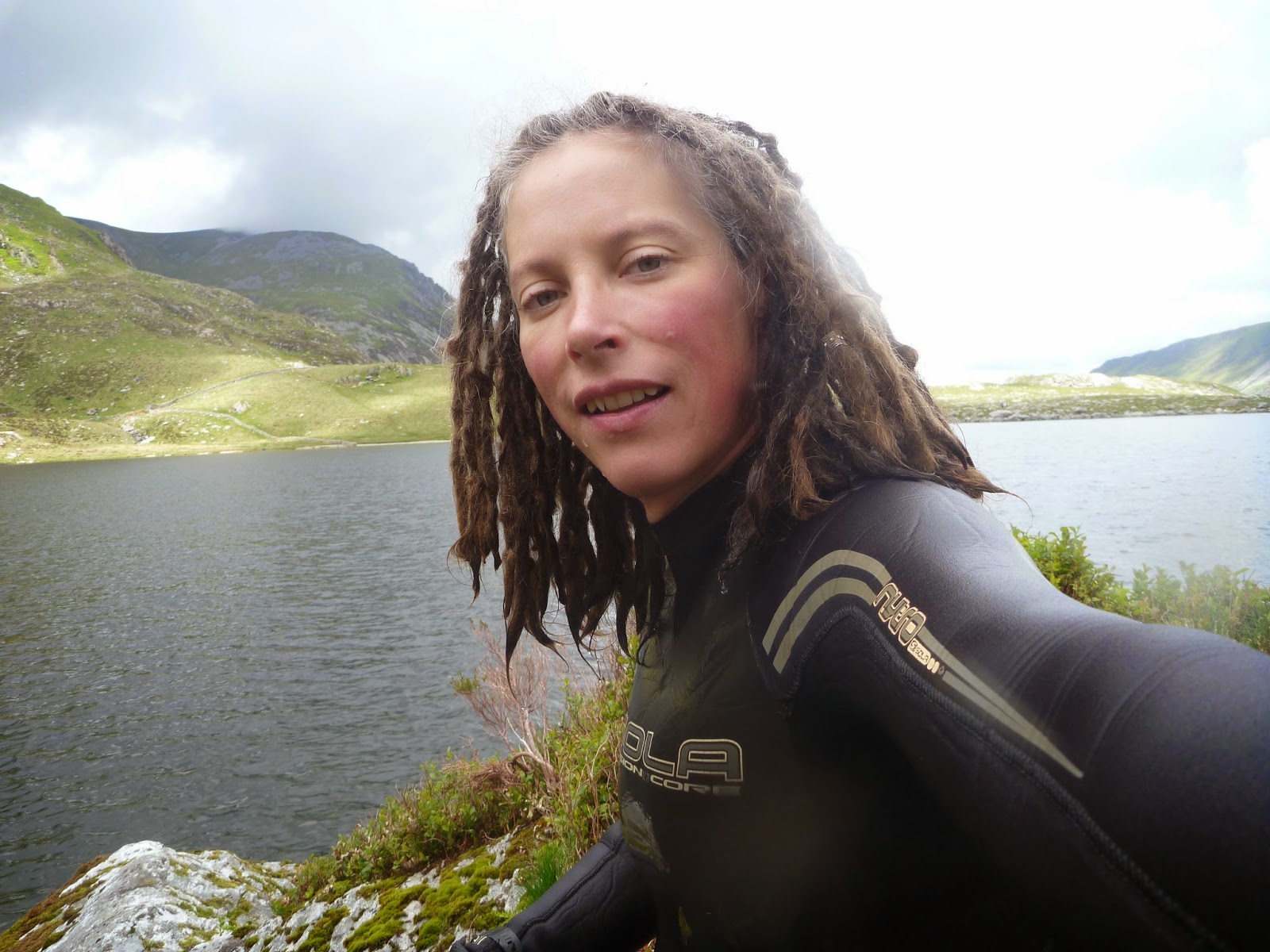 Perched like a mermaid on the little island, in my rejuvenated wetsuit 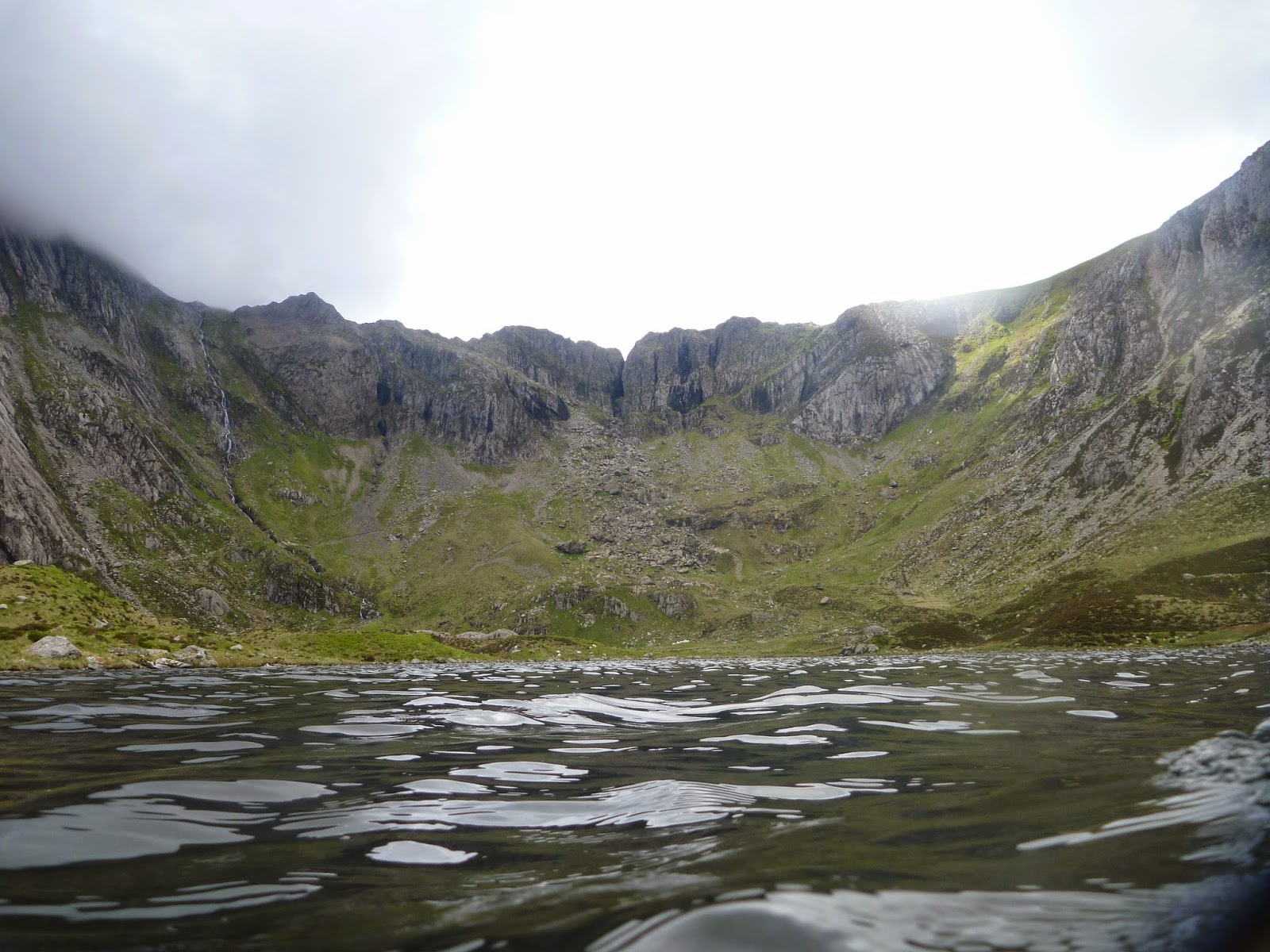 A great view on the Cwm Idwal syncline from the water

I swam to a little island that had looked rather enticing on our field day a while back. I happily sat on it, and swam on. I decided to swim to the place where the lake narrows considerably, and then go back. It's probably some 1200m total, and it took me some 50 minutes! I checked a random other race with a 750m swim; the person who came last had only needed 21 minutes for the swim. Although I did lose some time pretending to be a mermaid on a rock, taking pictures of the beautiful syncline, and of local vegetation. Still, a bit too long... but the wetsuit had been properly tested, and it was clearly fine. And it was a beautiful spot to do it! Next time, though, I hope the swim will be underground again; that just is special. Rhosydd?
Posted by Margot at 11:58