Underground swimming: in Wales too

I first thought I couldn't join last week's Thursday underground trip, as it was announced to that week be on Wednesday. But that wouldn't be good; that day I had to be in Holyhead until rather late to get my seafarer's medical certificate for this summer's cruise. I would never have made it in time! But I was soothed by the thought that the next trip seemed to be something right up my sleeve, involving swimming in a mine to some previously unexplored level. But then the Thursday trip went reassuringly back to Thursday, and I did make it. But I still looked forward to the wet trip! Even though it would be quite far out on the Llyn peninsula.

We met up at a supermarket in town. Four of us gathered. That left two more; one that had asked me to pick him up, but who hadn't responded to messages and phone calls all day so of whom the attendance was now in doubt, and one chap coming from Blaenau Ffestiniog. We decided that given it looked like it was just the four of us, we might as well pile into one car. And we went in a beauty of a Rover from '72! I had to keep all my kit on my lap but that was alright.

Somewhere in the dark interior of Llyn we met the others. The elusive chap had tried to contact me to say he would get a ride in with the Blaenau chap, but that he hoped he could come back with me, but I had never received his message. Late now! But he took it like a man. And all together we drove to the entrance of the mine in question.

We first checked out a small adit next to the path. It didn't go far, but it did lead to some nice old man's workings. Then we explored part of the mine that had been used as a landfill. Dear! That was a bit bleak. It was a mine in black rock to start with, and strangely coloured oozes came out of all sorts of openings in the walls, which were infested with unpleasant-looking molds. And the accumulated garbage was unnerving too: quite a lot of the metal was so rusty you couldn't stand on it; your foot would go straight through. There was a big gas bottle in there too. Empty, one presumes, but can one be sure? I don't easily find a mine unsettling, but this one surely was! 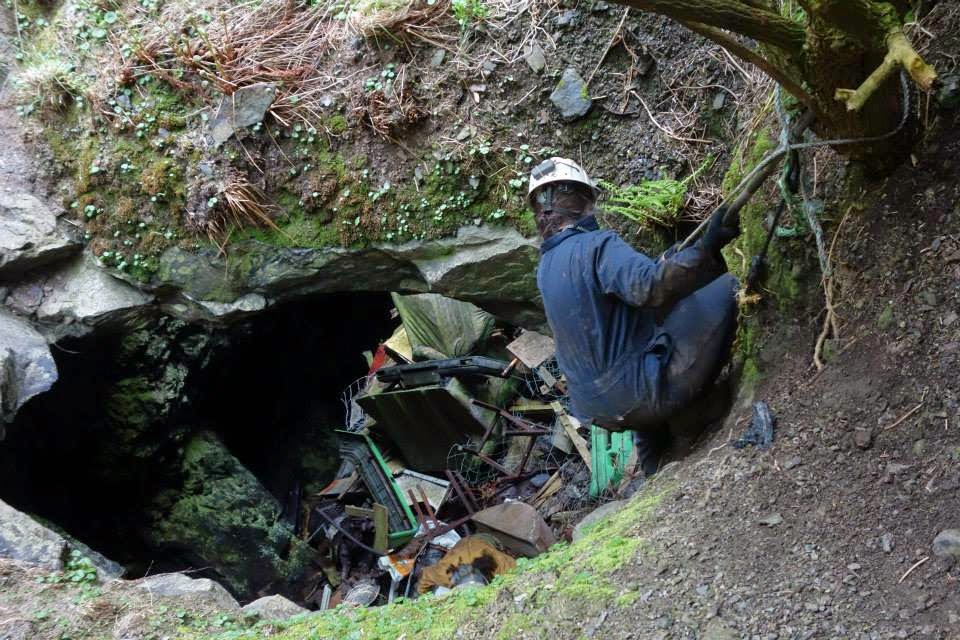 Descending into the rubbish. Pic by Linden

Dave, the owner of the Rover and the other School of Ocean Sciences employee, tried one inclined winze everybody else was too scared for (going up would be OK, but going down? Rather him than me!) and then we gave up on this part. And went to where the water body was we wanted to cross. After a bit of a look around we gathered at the shore, and I lowered myself in. Dave (every caving club needs at least one!) soon swam past, and got to the level that was our goal first. And seconds later he found out the level was filled up with stuff only metres further. Too bad! But we were having a nice time anyway. We all swam back, pootled around a bit, and then came out. (I tried to take a picture but screwed up. There are some on Flickr, like this one.) Where we were greeted by a pink evening sky with a rainbow in it to top it off. We were in a very beautiful valley near the shore anyway, and the view was just so amazing we decided to let the rest of that mine sort itself out. We were going to the beach! 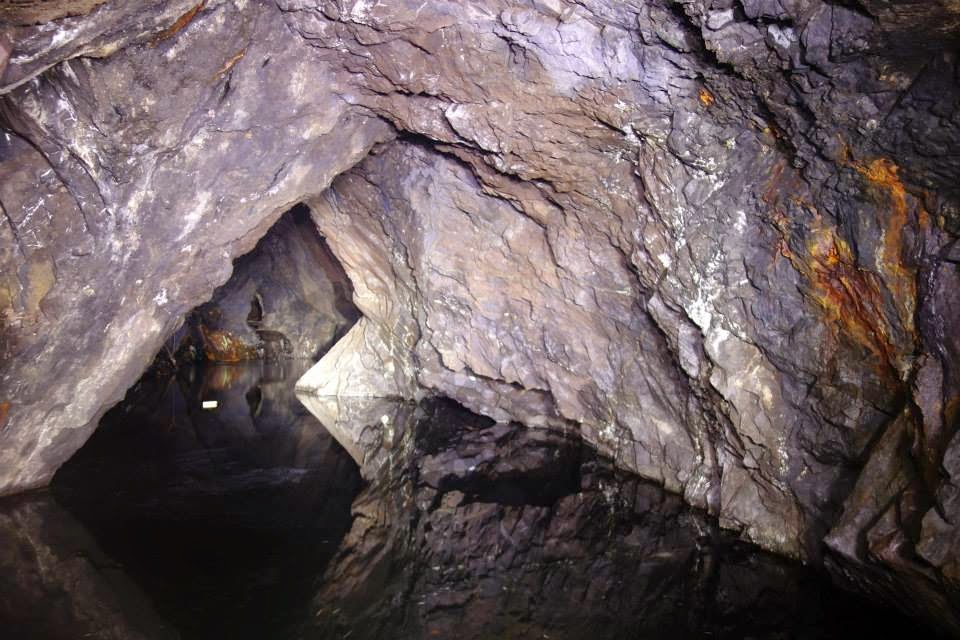 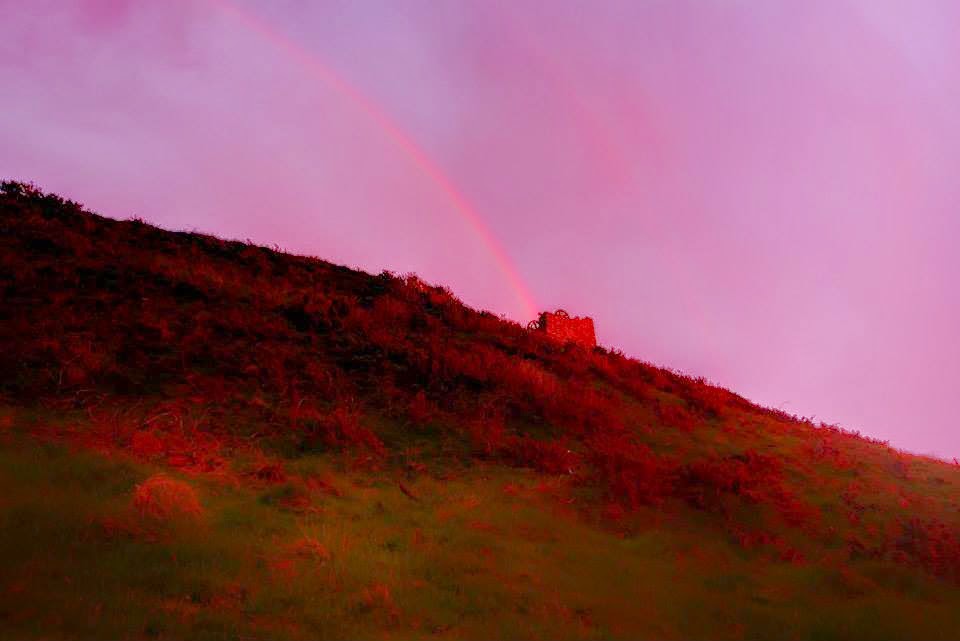 The rainbow that lured us out! Pic by Linden

The beach was beautiful too. It started raining; we didn't care, we couldn't really get any wetter anyway. But when darkness ate the view we went back to the cars, changed, and then enjoyed the cake the chap from Blaenau had brought.He was leaving for London soon, not to return for months, and someone had baked him an adit-shaped goodbye cake. It tasted amazing too! And after the cake we went looking for a pint, which we found in Pwllheli. And then it was time to go home. It would be past midnight when I got back to my car. A long night for not very much underground exploration, but fun anyway. Next week I'm otherwise engaged, but I look forward to more daftness with this bunch after that! 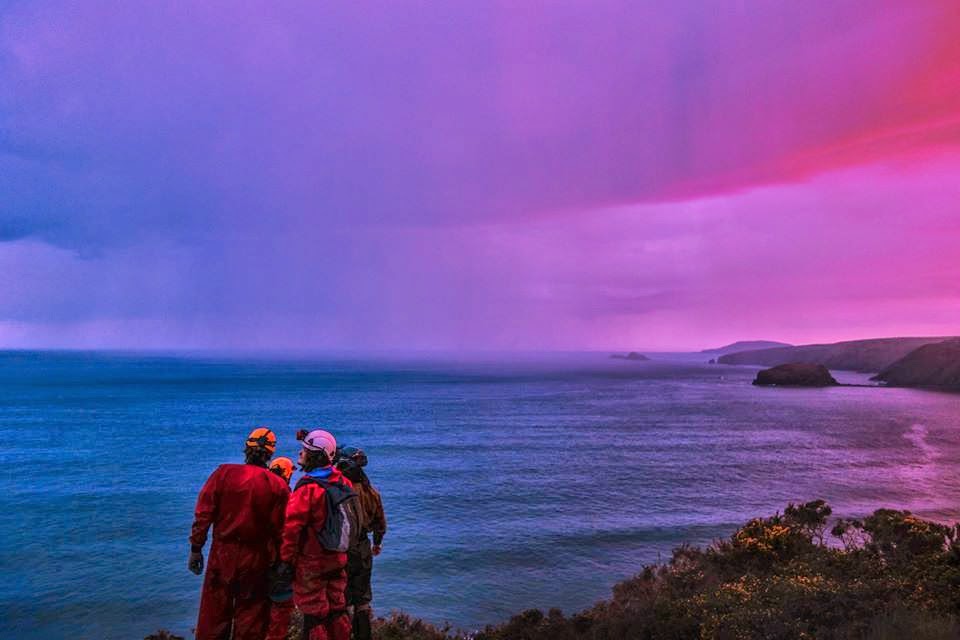