Bring a carpenter who moves like a panther up a ladder. And all is well!

The last time I was in Bedford Consols I had clambered up a chute. From that chute one could clamber up another. That one was hard to get out of, so that time I didn't; there were people waiting and nobody seemed keen. But from that chute you could see a ladder. And that ladder talked to me. I wanted to go up! 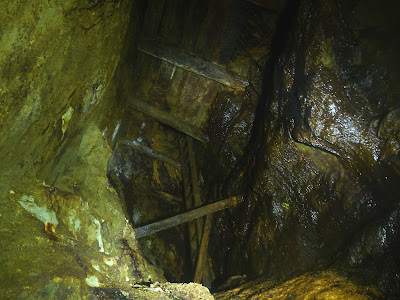 The picture I took that previous time, with the enticing ladder

When the same venue was on the list this week I figured this was a Lionel-and-Margot adventure in the making. So I texted Lionel, suggesting we'd go there, and if we should perhaps bring a pole of sorts, to make the clambering out of chutes somewhat easier/safer. No response.

Then I mailed. No response.

Then I phoned him. He had no recollection of the whole place! But he was willing to have his friend Finbar bring a pole.

And then it was Tuesday. No Finbar, no pole, but surely a keen Dutchwoman. Hugh and I were ahead; we reached the ladderway that goes up from "ground level" first, and therefore also the chute some tens of metres behind it. I figured Lionel knew where I was heading, and went up. Hugh followed.

When Hugh was out of chute 1 I went up chute 2. Or rather; I tried. It took a while. He didn't think the whole expedition was such a good idea and went down. Instead, Lionel and Alex came up. By that time I had found my way up the second chute. Lionel didn't like the look of it; he figured he could get up, but could he get back down again? I by now was a bit jaded: we always manage, really. So why not this time. 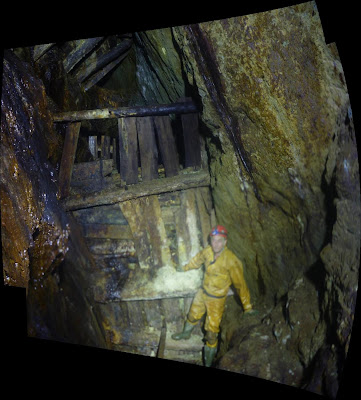 Lionel at the top of the second chute

I went up the ladder. Carefully; it probably had been standing there, decomposing, for at least 100 years. And surely, one rung gave under my weight. Luckily I had expected something like that, and I had half my weight suspended from my arms. The top looked enticing, but a bit tricky. All that old wood!

I went back to see how Lionel was doing. He had seen some wood lying around; maybe we could wedge it in the chute, to make coming up and down easier? Piece of wood #3 did the job quite nicely, so in no time they were up as well. Time for another attempt at the ladder. I had found bits of wood that fit the gaps where the missing rungs had been! The ladder was good as new. Alex would later call me a veritable carpenter. 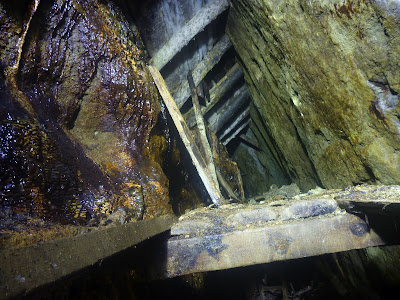 The hole in the platform the ladder comes up through; due to the low standpoint you can't see it, but this platform has rails

With Lionel keeping an eye on me I climbed up. The ladder lead to a wooden platform; a bit dodgy, evidently. But not uncharted, by the looks of it; I found a recent-looking candy bar wrapper... So I was careful, and had a small look around. Nearby was another ladderway! And we heard Dave's voice. Would it be the ladderway one passed at ground level? It looked different; this one was messier, with more collapses. And Dave could't see the light of our lamps, and neither could we see his. So we didn't really understand the geometry of the place, but we enjoyed this new view. It was a stope with several wooden platforms in it; one even had rails! I took a few pictures, but then we quickly came down. 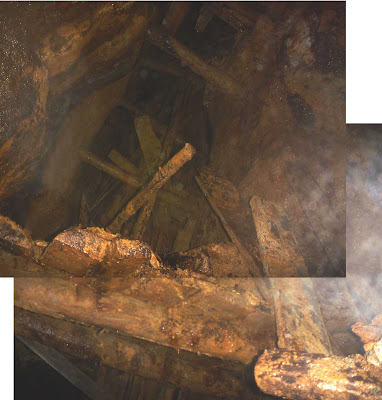 A messy compilation of two pictures taken, obliquely up from where I was sitting, above the wooden platform of the previous picture. In the jumble of collapsed bits of wood the intact ladder can't be distinguished.

At the level below the ladder we took time for another few pictures, and then we joined the rest below. And after a small scurry into the depths of the mine we headed for the exit. 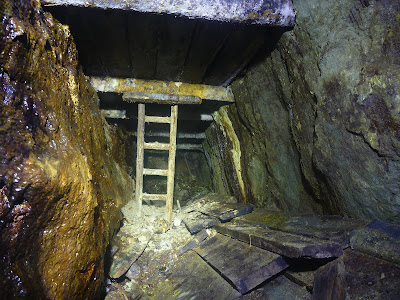 The people in front of us had scurried into a small side level; it had a tiny, sub-vertical stope in it! As if we can resist that. Lionel and I went up. Always fun. But then it was really time to get out and go to the pub, so that's what we did.

In the pub we had a look at the pictures I took. Not the best in the world, but pictures of a place nobody we know of in this club had been before! And Lionel, who acknowledged that one should tread carefully on such old wood, and in that context claimed I "move like a panther" (he can stay!), was glad he had, in the very end, paid attention to what I had been harassing him about. A good lesson to learn!
Posted by Margot at 10:12