How could I not have thought of the maritime museum? Hugh loves ships! And museums. When I dragged him to Amsterdam we visited the National and van Gogh museums. And that was very nice, but this time we really had to see the Maritime. 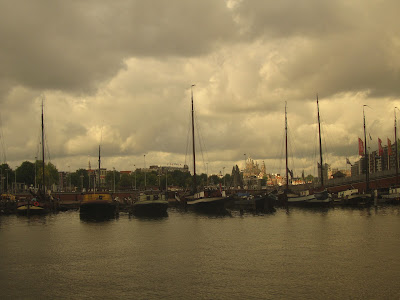 View from the museum back to the station

Our flight left 15.40, so we had the morning for the museum. We walked there from Central Station over all the new pedestrian bridges. I like these! And the museum lay, looking promising, with its replica Golden Age merchant ship moored right next to it.

The building itself is well worth a look. It had only re-opened last year, after a 4 year renovation period. The architects had tried to preserve the historic feel of the building, without compromising the demands of a modern and busy museum. I think they were succesful! 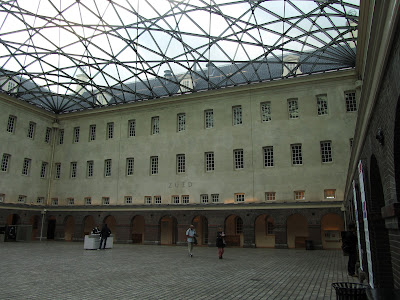 The courtyard had been roofed in a respectful way

We started by running out through the back as quickly as we had run in; that's where the replica ship is. Worth a visit! Its neighbour, a steam ship, unfortunately wasn't accessible to the public. 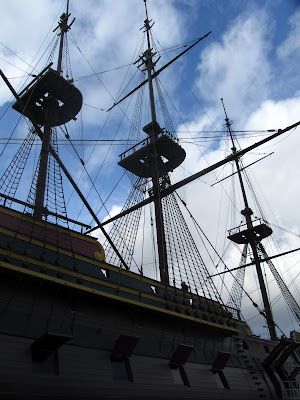 The museum holds many exhibitions; e.g. on the Amsterdam harbour, whales, the Golden Age, maritime paintings, globes, and models of ships. I found some of it a bit tedious; would anyone really want to peruse tens and tens of globes? But I was quite fascinated by the Amsterdam harbour. Even if you live close to it, you generally don't really get involved with it. Especially as it is the Amsterdm one; seen by many as the risible little brother of the Rotterdam port. 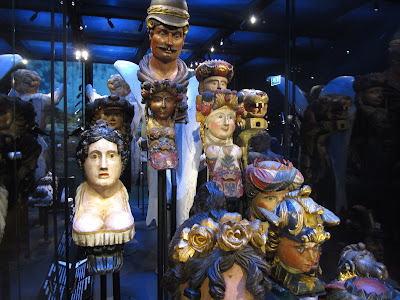 Ships' ornamentation - including some nudity

By the time we had to leave we figured we had seen what we were interested in. So we had time for a sanwich in the rather atmospheric restaurant, and then we were off, back to the airport. It's quite some fun, being a tourist in your own country!