Happy birthday to my mother

In March I decided there's more to life than science. In May that resulted in me visiting my mother again. That was a year after the previous time... And now it's September. And I went back! Four months between two visits is still a lot, but it's better than twelve.

I picked my mother's birthday as a good excuse to visit, and that turned out to be an excellent idea. My mother doesn't like conventions. She doesn't think having been born a certain number of years ago is much reason for celebration. But well, sometimes the rest of the world doesn't wait for one to get fired up about something, and just acts as if one is. And that happened.

I dragged Hugh with me. I figured it would be interesting for him to meet my mother; I think I have inherited the characteristics he finds most typical of me from my mother. And I wasn't quite sure how that encounter would go; he only speaks some three words of Dutch, and even though my mother understands English well, she hesitates to speak it.

It all went well. My mother spoke Dutch, and I would answer in English. Hugh would gather from what I said what my mother would have said. And in case of confusion I could translate. It was a nice gathering! Lots of coffee was drunk. 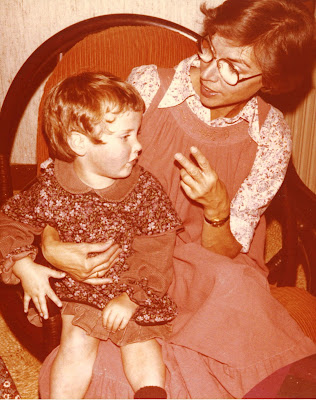 This picture was taken in September '78. I don't sit on her lap anymore! But some essential things haven't changed since.

Later that day we sneaked a visit in to Henco and Maaike; I had never visited their house in Amersfoort! But that has now changed too. Much home-grown vegetables were eaten, much beer was consumed, and there was much rejoicing!

That Sunday was my mother's actual birthday. And she had told her neighbours she would be having a glass of wine with me and Hugh in the garden, and that everybody was welcome to join. And it turned into a veritable birthdaty party! Lots of people turned up. My mother is turning into a conventional party animal in her somewhat older age! I think it's a good thing. I had a good time!

My next destination is Helsinki. I'm enjoying this new life that allows for family visits! I should make sure to see my father and other sister too before the year is over...