Mine of the zombie gnats

I had been in Great Rock before. But it had never before had all these dwellers. Live dwellers. Dead dwellers. And some of which I wasn't sure.

This trip to the mine was so well-attended we decided to split up in two groups. One group would do the "usual" adits, while the other one would look at some adits most of us hadn't seen before. So with only seven we set off, and soon we reached the first entrance. Gnats covering the rock in all directions! And a few very busy spiders. 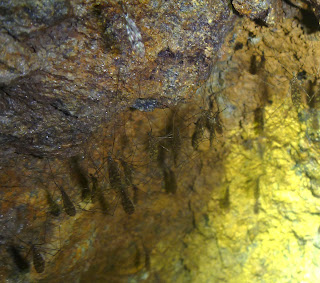 There were thousands of these! 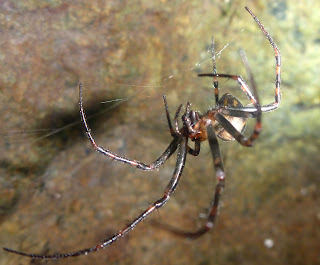 This chap (or lass) looks healthy and well-fed...

It was a nice little adit. We even found an abandoned drill. Altogether it was one of these typical, slightly leaning, purple-glittery (which is difficult to catch in a picture: here I managed a bit) Great Rock adits. When we came out we almost had to abort the rest of the mission: the chain with which the adit had been locked was nowhere to be seen. Dave had some chain in his car, but it would be tedious to walk up and down to get it. Luckily Rupert found it in the mucky water in the end; it seemed to have defied gravity quite a bit! But now we could move on to the next entrance. 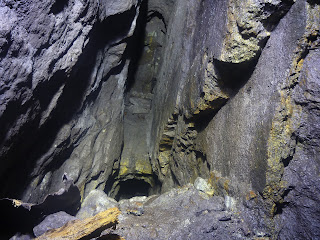 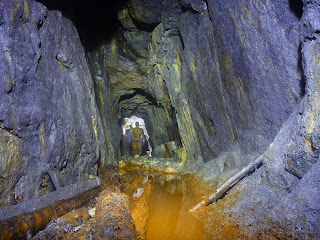 Here the purple of the walls contrasts nicely with the unexpected orange of the floor. 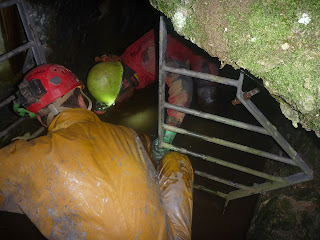 Rupert and Lionel looking for the chain

This one was rather small, but also quite pretty. And gnat-infested, like the previous one. When we came out  I noticed some funny shapes on the wall: white fluffy gnat-shaped things. What was that? I looked closer, and it looked like it were gnats that had died sitting there on the wall, and were then taken over by fungi who feasted on them, without obliterating their general shape. Or had the fungi caused their deaths, maybe? Like the fungi that create zombie ants? They were surely eerie... 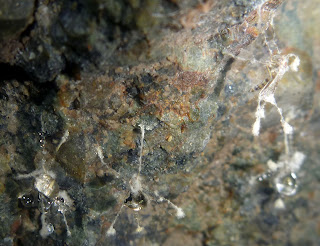 We had time for one more. That adit I had been in before, on a training evening with DCRO. Then we had not been allowed us to go past a collapse, but hey, this time we were not in function, so we explored a bit further. Quite nice! A bit of a pity that we spotted something blue near the end of the level. Copper staining in an iron mine? No, a car, that had been thrown into the shaft... that was a bit of a disappointment.

But this evening wasn't. We even had a stream next to the car park to wash all purple glitters off again! Even though I always do that with a bit of regret: purple glitter is nice...