Lionel had brought a printed-out trip report of a trip he had in mind for or caving weekend in Snowdonia. I had a look at it: it looked bloody die-hard! Would we be able to pull that one off? It mentioned terrifying crossings, and the need for lots and lots of kit. The group that did this in 2006, of which one member had written this report, didn't have enough kit to go back; that's why they had pushed on, and made it to the other side. That sounded daunting! But very, very intriguing too.

We all read the report. And decided to bloody give it a go. Maybe these people had been tested to the limit of their abilities, but there surely were ill-prepared nutcases too: one had gone underground in shorts andf T-shirt, and another had forgotten his cow tails. How much trouble can you invite? So we would not challenge fate as much. We would find out some of the trip had gotten easier in the meantime. Some had gotten harder...

It started with a problem that could be seen as a luxury. The entrance was up a hill; about 45 mins up. And the weather was amazing! Unfortunately it started raining while we got kitted up; we dressed conservatively because of it. But after that initial shower it was glorious. Too glorious to be walking uphill in a caving suit, carrying ropes, a boat, a pump, a buoyancy aid, and whatnot. But we got there. 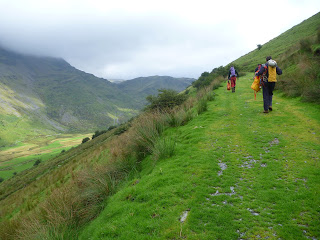 Carrying all the kit to the entrance 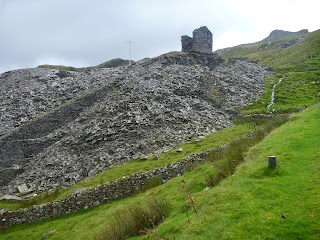 These signs tell you clearly you reached a slate mine

The entrance was easy. I had never been in a slate mine! Why do they even mine that stuff in that way? I thought quarries would do. But evidently not. The place was rather impressive. And then we got to the first pitch. There was a fixed rope, but we didn't trust it; it could be who knows how old. We fixed our own. And left it; if we would have to come back that way we could.

It was a somewhat uncomfortable abseil; slate slopes are slippery and angular. But we all got down well. The next pitch was similar. And at the bottom of the second pitch we found a zip wire! That was fun! We used our own pulley, even though we found an in situ pulley at the far side of the wire. With pull-back cord.

A chamber near the entrance; it was quite a recent mine 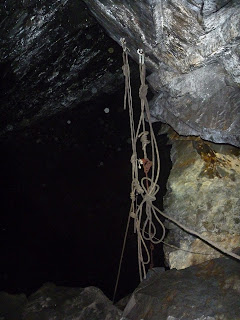 The first pitch, as it was rigged; we chose to use our own ropes 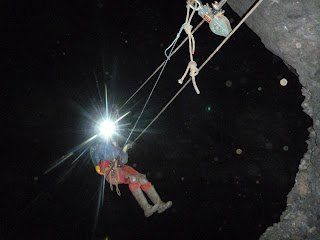 Lionel (bright headlight and all) coming down the zipwire

Only tens of metres away was a suspension bridge. Fun too! This pace was amazing! Not only were the chambers so big it was truly impressive; there was also a veritable assault course set out. Great! 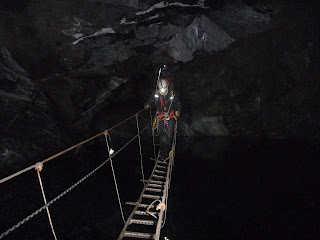 Hugh on the suspension bridge

On the other side of the suspension bridge we ate something. We would need the energy! The next thing was an old wood bridge. All the sleepers had gone; only the longitudinal beams were left. How rotten were they? Better not ask. Better clip in (there was a safety rope), balance well, and hold on to the ceiling. No problems. 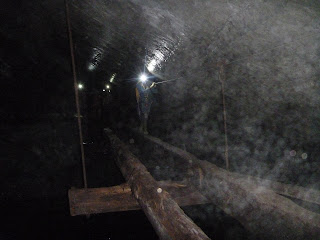 Richard on the relatively intact bridge


The next impediment was a chamber (flooded, as the previous ones) where the original bridge had a) completely collapsed b) not been replaced. How to cross? A rope was bolted into the wall. You had to tarzan your way to the other side. Without footholds.

Was that it? Of course not! Now we were faced with the real challenge. It was called the "bridge of death"; we had read all about it in the trip report. Except that half the bridge had collapsed since. Basically, there were a rope and a steel cable bolted into the ceiling, going to the other side, and also fixed in the middle, where one bridge sleeper still remained. All four of us looked at it. This was hardly possible! But we had Lionel. The navy seal in him woke up, and he hesitated not; he just clipped into both rope and wire, and started to just monkey his way across. All well as long as the rope slumps down. Where you have to get back up, that's where it gets difficult! Not for Lionel, though. He effortlessly made his way to the middle. There he had to manage to clip into the wire on the other side, and detach himself from the rope on the near side. Easier said than done! But in the end he managed. And got to the other side of the chamber. 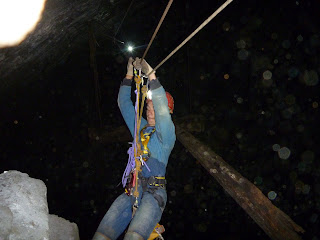 Richard dangling from te wires of the Bridge of Death 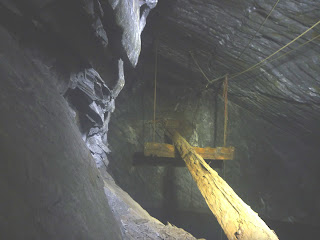 The Bridge of Death seen with long exposure time; notice the rotten, broken off far end

What is difficult for Lionel is really challenging for non-Lionels, in general. We sent Richard next, carrying a rope; He's light, strong, and experienced, so we figured he would make it. The rope would then help pull Laura across. And Hugh and I would have to make it on our own. Would we manage?

Richard made it. And Laura too. Then it was Hugh's turn. He even brought a bag along; he has a much more favourable weight-to-strength ratio than I have. So he made it fairly easy. And that left me. I attached myself to the rope and the wire, and had a go. Down is easy! Up is not. The karabiner with which I was attached to the steel wire had so much friction I struggled to pull it across. It jammed. I was dangling in mid-air, and was wondering how we would solve that situation. But Lionel shouted I only needed one metre more to get to the middle; that motivated me, and I just pulled really hard. And made it!

I took a break in the middle. And then went on to the other side. On that side, you could reach a rotting beam if you got halfway, so I got there, hooked the beam behind my foot, pulled myself in, and just moved along the beam for the rest of the way. Not bad! And by now we felt like proper adventurers!

The next obstacle was yet another flooded room, where a canoe replaced the bridge; you had to lower yourself on a rope into it, and then pull yourself (or be pulled) across. The next person would pull the canoe back and repeat the sequence. This really was yet another unprecedented piece of underground fun. But it would be the last! Just behind that chamber we found the boundary between the mine that we had entered and the one we hope to get out from. It had been two separate ones: Croesor and Rhosydd, but each had infringed on the other's territory, and the breaches allegedly had allowed miners from each mine to escape into an early end of the working day through the other's territory. The connections had been bricked up. But these walls had not survived mine exploration. 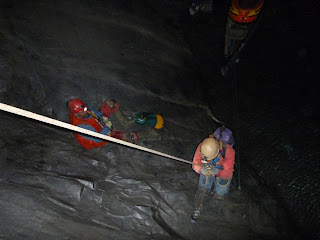 Laura coming up the rope on the far end of the chamber of the canoe, which can still be seen in the background.

Having reached Rhosydd the antics were over. We just walked. And soon saw daylight! We had to pick an exit that didn't look too dangerously steep, but we managed. And then we were left with a beautiful walk back, over the crest of the hill, to the entrance, quite far away. We had to get our ropes back! Richard and Lionel did that while I took pictures, aided by Hugh, and Laura waited for us. And then we could walk back to the cars, looking back on the most outrageous caving trip any of us had ever done. It had been great! 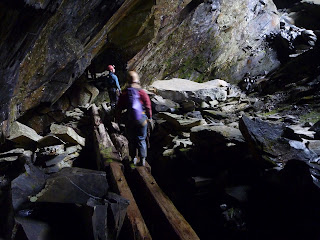 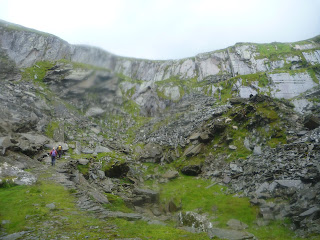 Where we came out 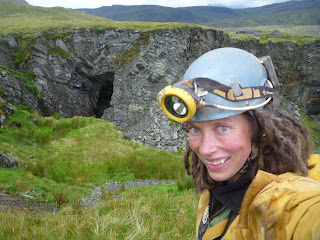 Me and the hole we clambered out through in the background

Little figurines on the left, and a lot of the quarry on the right 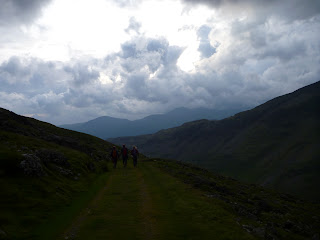 Walking back underneath dramatic skies

When we got back we drove past a pub that had many Hillary/ Mt Everest memorabilia, but after only one pint it was time to get home. Time for yet another very late meal. But not such a heavy trip the next day! We had earned a bit of rest after these two trips...
Posted by Margot at 23:36