Sometimes people ask me where “home” is. I never know the answer. Plymouth? No, that is where I live, but it doesn’t feel like home.  Amsterdam? Maybe. I lived there for a long time, and I was quite fond of the city. I still am, although I wouldn’t want to live there anymore. Where I am from? No, that isn’t home either. I was glad to leave. But it is a place of emotional significance, of course.

When I dragged Hugh to Amersfoort anyway, I decided I could show him where I had grown up. It’s only 10 minutes by train. And from the train station it’s only a short walk.

When we reached Nijkerk railway station I noticed the very long platform. That wasn’t there back in the days? Neither were the two-storey bicycle racks. And there was a new zebra crossing.

The old household school was gone. Now there were rather nice-looking houses. I thought I’d show Hugh where I had grown up, but all I could do was pointing out that so much was new. I’m getting old!

The old pond with the fountain was still there, as was the adjacent creek. We would sometimes float self-made boats there! And find freshwater mussels! And admire the ducklings!

The “park” (I don’t think you can really call a small field with some trees a park) was changed too. No gazebo, but a monument for the violence in Indonesia just after WWII.But the house was still there. And it looked the same, be it a bit better maintained. I lived in that house for 17 years! So something was still familiar. 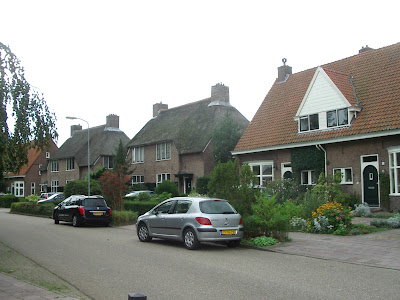 I grew up in the house with the tiled roof...

But most wasn’t. I was shocked to see that the police station, opposite our house, was abandoned and boarded up. And the supermarket too! And all the shops along its perimeter! And the shops and houses beyond the police station. And the pet shop in the old windmill that stood in between was entirely gone.  What was left was just some fenced-off empty land! Dear! 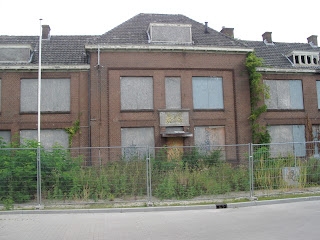 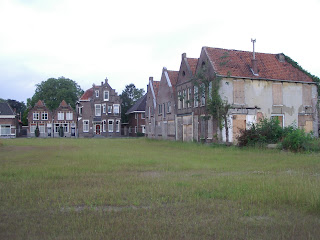 This empty space once held the pet shop 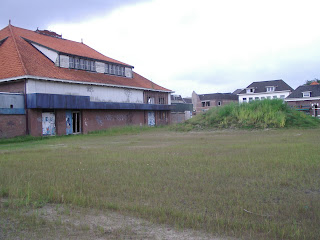 This building held our supermarket, back in the days...

We briefly walked into town. That was different too. Not in a bad way, though; the market square looked better than before. But this was not where I had grown up. 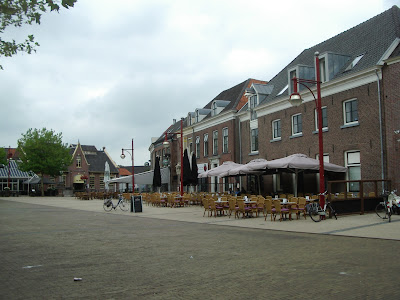 I was a bit confused when we walked back. But at least I could see the town was doing well – over our entire route the buildings and gardens looked very well-kempt. I think Nijkerk is doing well! Maybe those who grow up there now will look back at it a bit more favourably than I do…
Posted by Margot at 19:50