'You have good veins! You even have two we could use! And if you come here in 50 years' time, we can still choose!' Lying on a bed in the bloodbank I uttered doubt on whether I would still be eligible for blood donation in 50 years' time. The lady had a look at my birthday on the donor form, declared I was a young foal, and that as long as you are healthy and able to clamber onto one of these donation beds, you can continue donating until you're 100. I was surprised! 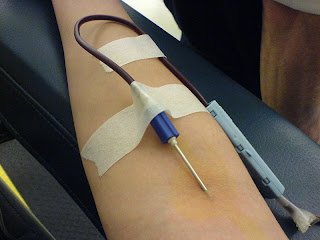 If you got yourself a piercing, you are not allowed to give blood for six monts, even if you can can prove it has been done in an officially approved piercing studio with the highest standards of hygiene. If you are a man having had sex with another man you are never allowed again. If you have had your yearly dental check you can't donate in the next week. They really are overly, and sometimes insultingly, cautious with whose blood they take. But frail old ladies are allowed! I was pleased to hear that. 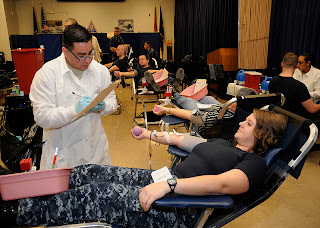 Blood donation (not where I went)

With tropical diseases spreading, they might have to refuse more and more people who have been travelling. If that gets them into trouble, they may be inspired to ditch some of the more paranoid rules they have. Or would those in charge prefer to let people die because of shortage of blood, rather than because of contaminated blood?

There was one thing going on the last months that gave me the impression that also in the blood bank, money rules over common sense. You're donating into a bag lying on scales; when you've reached the required amount the machine gives a signal that attracts an attendant to take the needle out and send you on your way to the drinks table. In the old days, the signal was a beep and a flashing light. That left no doubt regarding which donor needed the needle to be removed. But the machines were replaced. 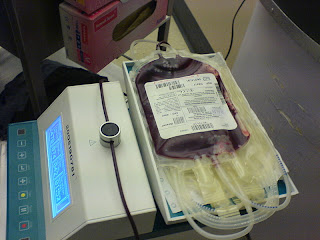 Arbitrary picture of such a machine from Wikipedia

The new machines only beep. And if you have a plethora of donating beds all in one room, it's practically impossible to hear which bed the sound comes from. They have to check all machines closely to figure out who's done. It's clear the people working with the equipment were not consulted on his issue! So this does not bode well for how the blood bank chooses its path into the future. Fear of claims may win over the drive to make a difference. We shall see... I hope that when I come back to donate at the respectable age of 86, the bed next to me will be occupied by some gay chap, and that when he has filled the bag, it will be clear to all attendants that it will be him who is done. But I'm not holding my breath...
Posted by Margot at 09:12

Much the same rules in the Netherlands... Although they still have machines that beep and flash.