I didn't think we'd make it to this rescue practice. And I also figured we'd have difficulty leaving before the day was over. But all turned out well, and it was a very good rescue practice. I got to rig!

It started a bit improvised: I was going to be picked up in town together with another member, but that person dropped out, so now I had to bike to Plymstock instead. That's OK! It means I get to flirt with Dave's dog before we leave.

We were approaching Buckfastleigh when Dave's phone rang. It was a message from his work: two intruders had been spotted. Would Dave go and check it out? He would. So he turned the car and headed back to Plymstock.

Dave works in Moorcroft Quarry; I had never been there. So when he drove through the gate a whole new world opened up. It's a beautiful place! Big rocky holes in the ground, enormous machinery left and right, strange rusty pipelines going everywhere... but no intruders to be seen. So he reported back, and we just hit the A38 again. I wondered if we would do more than decide it had gotten too late and just turn back, but that was pessimistic.

It wasn't even that late when we turned into the parking place. And Jon, one of our coordinators, was still there. I thought he was waiting for us, but it turned out he just needed to take a phone call and was therefore still at the surface. But it did come in handy: Jon could look after Dave's car keys. So we quickly changed and went down the mine.

Near the entrance we found Rick, who was manning a heyphone. The other one was down at the bottom. When we got there I got the heyphone pushed into my hands. I had had mountains of time to familiarise myself with it in Kents Cavern, so that was fine! Then Roger revealed the plan for tonight: he would be a casualty that needed to be stretchered up the slope. And the slope is quite steep; you can get up and down without a rope without problems, but when you have to carry someone it gets hard. So the stretcher needed to be rigged from the top. And Roger figured it should be Julian and me rigging it. With Dave watching over us. I was chuffed! 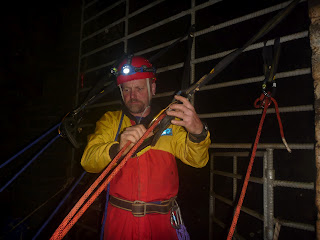 Julian and our fabulous rig

As a stretcher is quite heavy we decided to use Z-rigs; feed the rope through two pulleys in order to have to use less force. And I learned to rig these on a Norwegian glacier a few years ago. But I'm crap when it comes to actually remembering how to start. When the beginning is made I know how to proceed! Luckily we had Dave who helped us getting started. He also kept an eye on details I would miss; how high do you attach your ropes? Do you make sure you don't run the risk of dropping kit down the slope? Do you keep the ropes out of your way, so you don't step on them or trip over them?

By the time we had a beautiful rig with a hauling rope and a safety rope in Z-rigs and two fixed handlines the stretcher team was impatient, but hey, we're learning something here! Bear with us.

As Rick had vanished over the hill with heyphone and all, and the stretcher team was too far away for shouting, we needed a chap to stand midway and relay messages. But it all went well! In no time was Roger lying at our feet. We had noticed some things we would do differently next time, but altogether it had gone really well. And now I am much more confident I could rig something like that! 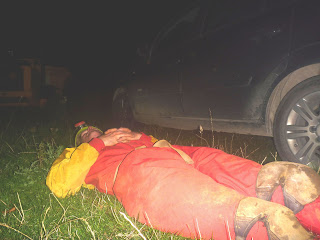 We got Roger out of the stretcher, de-rigged, and went back to the cars. Where we saw a big empty space where Jon's car had been we figured it might be a long night. No Jon, no car keys! But luckily, a quick phone call revealed he wasn't far away, and would hasten to correct this faux pas.

It was quite late, and I still had to bike home from Dave, so I supported the suggestion of skipping the pub this time. By the time I got home I was tired, hungry, thirsty and smelly, but satisfied with how the evening had gone!