The quest for evidence of past high sea level continued. For the current sea level project, we needed sediments from past interglacials that had microfossils in them that would contain useful information on sea level at the time. Not necessarily easy! The sediments in question might be quite overlain by all sorts of more recent sediments, some of the not-so-easy to core through type, and the time passed since their deposition might allow for lots of dissolution of the microfossils. So so far we had been largely unsuccessful. The foram displayed on this blog was pretty close to all we had found... but there was hope: Norfolk! Somewhere around Easter we would go there, hunting for the Nar Valley Clay, deposited three interglacials ago, during a period of quite high water. It was supposed to overlie freshwater beds. We wanted to sample that contact! And more.


But before you can get down into the sedimentology of things you have to do lots of preparational work. You have to browse through literature to see what others have already found out about these sediments. And you have to go and get permission to stick your coring equipment into people’s land. The first had kept me busy for a while, especially since I found out the British GeologicalSurvey has an online data repository of most of the boreholes they have sunk. And that’s many. The latter had already started; I had found the contact information of three big players in the region: two quarries and one official body that owned some woodland. Access permission was flowing in! But if it’s just an ordinary field you want to core in it’s impossible to find out through a map who owns it, and therefore who to ask permission from. That has to be done on location. And Tasha and I were sent ahead to do that. Roland and Antony would come in when the work would get physically demanding.

So on a nice Tuesday I drove to a campsite not far from King’s Lynn, and pitched my tent. A few hours later Tasha arrived. The evening was for a lovely pub dinner, and the day after the work would start for real. 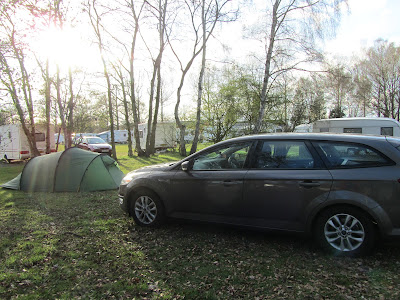 My modest tent and huge car
We spent two days driving around, ringing door bells, phoning numbers found on gates, visiting the county council and the estate office, sometimes running from pillar to post. We encountered friendly dogs, amiable farmers, protective farmers, confused turkeys, more confused receptionists of posh insurance companies (the company owned relevant farmland!) and much more. We found out that since the bulk of the literature on the region was written, a major grid of high pressure gas lines had been installed in the area. That took some potential coring sites of our list! But we had plenty left. 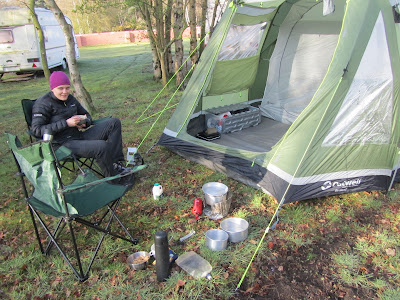 Frugal fieldwork breakfast
It was a bit of a faff to do such a recce from a campsite; camping always involves a lot of lugging stuff around and getting everything dirty, but nowadays, fieldwork preparation involves a lot of online activity. And the campsite had a weak signal, and a tent is not a very good place to do computer work. Furthermore, you can’t reasonably check your sediments for microfossils in your tent, if only for the lack of socket for the light source. We probably took frugality a bit too far; the fieldwork budget on this project is limited, but next time I think we should find ourselves a building to reside in. A building with good wifi. That will also save us from having breakfast in the cold and the rain! That’s the thing to do in one’s holidays… 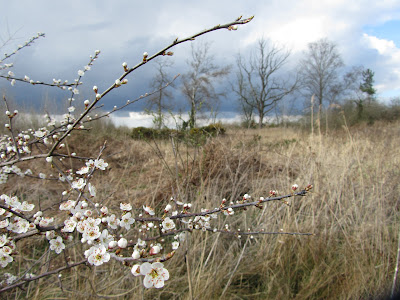 One of our more scenic sites 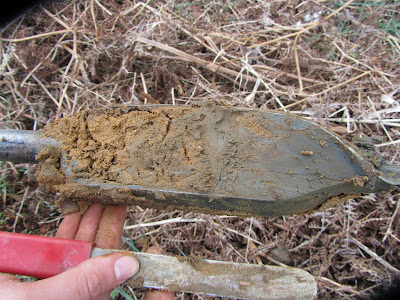 Nar Valley Clay!
After having been quite executive with the permission-asking business, we had some time at the end of the second day to actually sink an auger down in one of our sites. Lo and behold, we found Nar Valley Clay! This was going in the right direction. So on the third day, after taking down our tents and trying a few more locations, we were not too disappointed to be stopped by impenetrable flint layers. 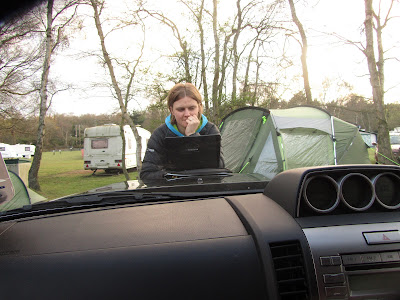 Camping ICT
We picked up the men from the railway station in good spirits. We had sent them an extensive file with an update of our findings, and that kept them busy for a while. As soon as they had read up on all of this we could go and get started for real. And with a bit of luck, this fieldwork would kick the whole project into a higher gear!
Posted by Margot at 17:33