Fieldwork preparation involves a lot of staring at the map. And sometimes you find what you were not looking for.

I was having a good look at Google Maps, looking for clues on who would own what stretch of land. And one of the map views I strutinised is below. Do you see what I see?

Tasha had seen it too. She mailed me we should really visit that place. And we did.

As the map already indicates, Setchey is hardly a bustling metropole. It is hardly more than a farm, a garage and the biggest beer shop in the UK. But that shop is truly overwhelming. Beer as far as the eye can see! More beer than one can imagine! And then another aisle! It was hard to not spend half a monthly wage. They had all these beers I had been enjoying in the Netherlands, which is not Belgium's neighbour without consequence. And they even had the unusual beer I had only found in Maine! I bought four of these. 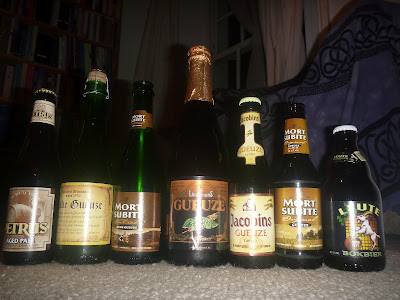 In UK supermarkets you can generally buy things like Leffe and Hoegaarden. What you never find, and what I like, are Gueuzes. So I stocked up on these. They even had a wide range of "old Gueuzes"; I had never seen the likes of these before, but it sounded like it would be a Gueuze but then with stronger taste! How could that not appeal to me.

I also bought some beers almost at random. No way you can make an informed decision in a place that offers so overwhelmingly much choice. But I like bockbeer so I bought an unknown one, and I thought due to its name "Malheur" would make a good present for Hugh. I figured he might like a Delirium Tremens (he's that kind of guy!) though it ended up being a Delirium Nocturnum, and I bought a Duchesse de Bourgogne at random. She turned out to be quite a treat... 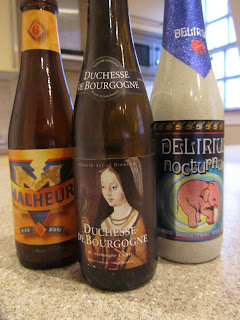 I have now been back for five days, and I can provide a preliminary report: Malheur is quite pleasant, Gueuzes do what they are supposed to do, Petrus aged pale is of course still very vinegary, Duchesse de Bourgogne accidentally is a gueuze too (it only takes the aging in oak barrels, doesn't it?) and quite an excellent one, and indeed, Oude Gueuze is Gueuze squared! I like! We are likely to do fieldwork near Peterborough as well, which is quite close to our Norfolk sites; I think I could imagine a little trip back to Setchey...
Posted by Margot at 08:41

Duchesse de Bourgogne is one of my favourite beers. In my opinion it is best when it is not chilled too much. I usually don't bother putting it in the fridge. What say you? (Or what does the label say? I don't know.. ;-) )

I have only tried it twice! But I think you're right. Most good foods (including the liquid ones) should not be too chilled as that masks the taste. With an exception for icecream perhaps...