Who would you have teach your students on a geography fieldwork? A lab-rat geologist, of course. With limited teaching experience. What could possibly go wrong. Nothing!

The first two days of the Ireland fieldwork I would spend promenading along part of the Burren Walk with a colleague experienced in agriculture. We had agreed in advance that he, who had done that walk many times before, would just talk about whatever geographically interesting we would come across, and I would pitch in if I saw something I could lecture on. I had read about the area; I figured there were some interesting geological features to be seen.

We set off. Ian, my staff companion, immediately started to ooze knowledge. Some of it quite on his terrain,but some of it quite geological. So I was either learning something new, or seeing him deliver small lectures on things I figured I would target tomorrow. And the weather was gorgeous! 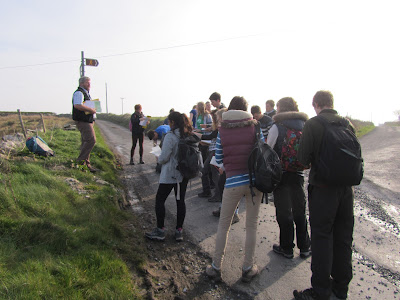 Ian lecturing in the open
My first chance came when Ian took the students to a cut some farmer had made in the side of a slope. It looked like a now empty silage storage. And the bedrock was nicely exposed! Ian talked about farming and water pollution and the likes, but then I kicked in and asked the students how old they thought some level in the modern peat was. A few thousands years? Yes, something like that. And a level about 20 cm lower? About a thousand years older? That was the answer I expected, as I figured they would not have noticed the erosional contact with the shales below, which were Carboniferous of age. So in order to give them an idea of how much time was missing in between I ranted a bit about oceans coming and going and dinosaurs not even having been invented when these shales were deposited. And that as an Earth scientist you always have to be aware of such things! 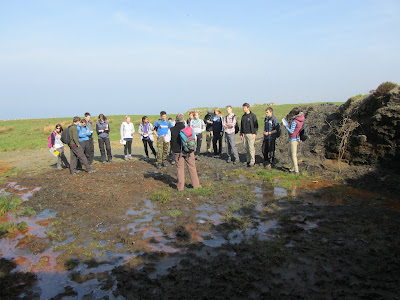 Ian talking about agriculture in the silage pit; I'm still standing next to my erosional contact
We walked on. Ian talked about agricultural history, EU regulations, swallet holes, pollution, tourism, planning, the potato famine, and what not. And then we reached a ring fort. That would be our lunch venue for the day. Could it be better? He made all the students make a sketch of the fort and its surroundings. The best sketch would win a Twix! Bribery immoral? Heck no. So the students set to work. 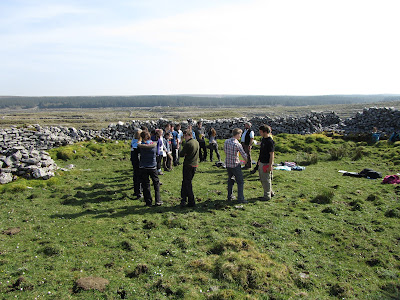 Ian and the students in the ring fort 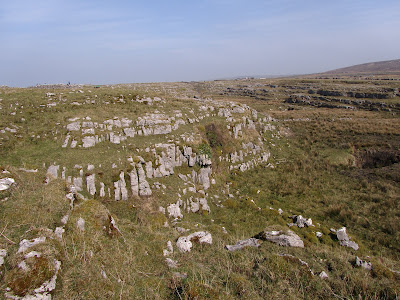 The ring fort (left, on the horizon) and the valley next to it
When we looked at all sketches we saw that what Ian had seen coming was true: we had lots of sketches of the fort itself, but hardly anyone had placed it in its surroundings. I think that was one of the things this fieldwork was good for: getting the students to look at things in context. The ring fort was situated on a hill top overlooking the sea, with a nicely sheltered valley next to it where you could graze your cows. Hardly any of them had documented that. Maybe next time they will! 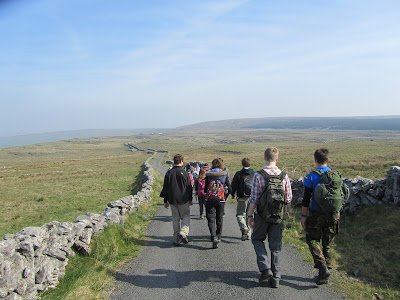 After lunch we finally reached the part of the walk where we could see what is so characteristic of the Burren: exposed limestone. Now I got really excited! There was a bit of typical limestone pavement clint-and-gryke landscape just next to the path, with limestone slabs set in the grykes. I wondered if the vertical bits were remnants of cheveaux de frise (there's a lovely picture of just that here), but closer inspection made me conclude they were just the work of people like us. Just like children building dams in streams people also build cheveaux de frise lookalikes where there are grykes and clints. But the clints and grykes gave me a spiffing opportunity to let the students think of why they formed. And when that was sorted, I hoped they saw it was almost magical you could, just looking at some of these slabs, read so many chapters of Earth history. The stone itself, fossils and all, spoke of the middle Carboniferous, the fracture pattern spoke of later deformation, probably related to the closing of a nearby (pre-Atlantic) ocean, the exposure spoke of glacial erosion and human deforestation, and the grykes spoke of Holocene karst. How beautiful is that? 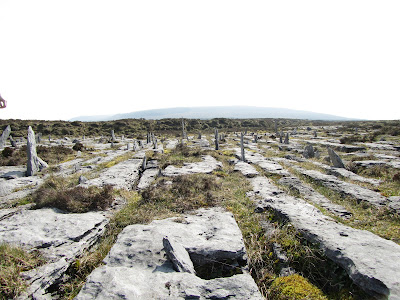 I got my piece de resistance a bit later; we got a beautiful view on the terraced landscape so characteristic of the Burren. (There's a lovely aerial picture here!) I asked the students why they thought they were terraced. They thought the terraces were beach cliffs. I tried to have them conclude themselves they couldn't be. And I think I could make them see that just sitting on a hill looking at another hill you can, in this case at least, make far-reaching observations on the workings of Carboniferous climate. 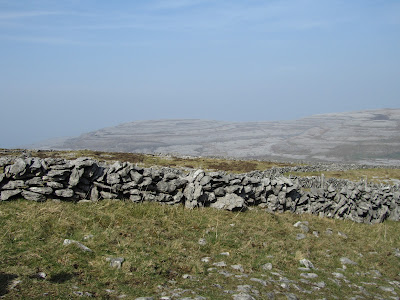 It was downhill from there, literally; we walked down to the river (a river in a karst landscpae?), and from there back to the road. We bothered them a bit with why that river was there and what else had happened in the valley and then it was 5PM and we were ready to be picked up by the coach. For me it had been a great day! It's a privilege to be taken through such an amazing landscape with such a knowledgable colleague. And I was quite impressed by the students too. They were fit, uncomplaining and quite responsive. So I looked forward to doing it again! 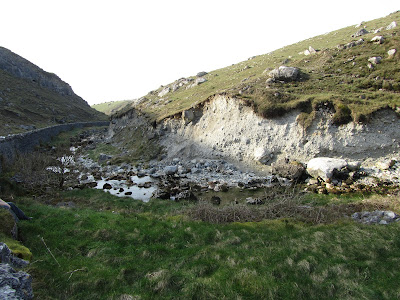 The river Caher cutting through thick glacial sediments
The next day it was even better. The weather was still gorgeous, and this time I could take some of the talking from Ian; I handled the karst features and the glacial sediments. We even had a photographer with us; one of the cartographers was not needed in the lab and came with us. And he also came in handy with the judging of the ring fort sketches! And this time the students were even more on a roll than the day before; after I'd done my 'terrace pitch' several came up to me to discuss the matter more. That's how I like it! It was a great way of starting this fieldwork. Thanks to Ian and the students. And I think that even though I'm a lab rat I pulled it off!
Posted by Margot at 15:05