Ireland: the visual and social aspects

The ireland fieldwork is not just travel, work and then travel again! A good fieldwork has a social aspect. And this one sure did. And it of course also had unexpected moments of beauty. I figured I may well combine these two to one happy blog post. 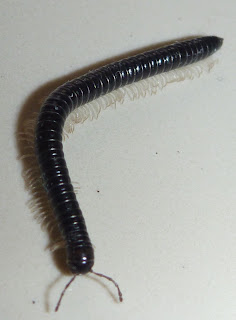 There are many, many millipedes in Lisdoonvarna! This one resided in my bath. I evicted it; I figured we would both be happier if he went outside.
We were with 14 members of staff. That's quite a lot! And most are spiffing people with whom it is a pleasure to hang out for a week. Some of them I don't get to see very often in daily life. And with some, things were comfortingly normal; I had brought my running kit, and just like in Plymouth I went running with Pete every second day. Not before lunch, evidently; we had to reschedule to before breakfast. Not my best running time, but better than nothing. Pete had already scouted out a good 4 mile route from the hotel before we even got there!
One day I woke up, and figured it would probably be almost time to get up to go for our run. I looked at my watch: 7:09! I was supposed to meet Pete in the lobby at 7:05... I jumped into my running kit, dashed down the stairs, handed my room key to the receptionist who said "ah, there you are! He just left a minute or so ago..." So I dashed out of the door. I ran like mad. I ran out of town, and where the views became a bit broader I discerned a yellow dot on the road ahead of me. Pete! I shouted, but he couldn't hear me.
Breathing heavily I ploughed on. I knew there was a sharp turn coming up; maybe there he would be able to hear me. But he didn't. I ran on and on. Then I saw him run a little loop. A loop! He must have seen me, and started looping to give me the opportunity to catch up. No; he had just dropped his hat...
In the middle of our run there was a long, gradual slope down. I know I can't possibly outrun Pete on a slope up, and on flat terrain I have little chance either, but Pete's not a very fast descender. So I legged it. And yelled again. And this time he heard me!
We ran together the rest of the way. That must have been my fastest run in a while! I know I manage to dig deepest when I have a bloke to run after. I should try to pretend it's a social run next time there's a race; maybe I can keep up with him much longer then! 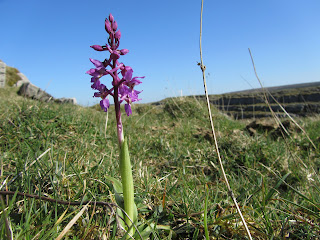 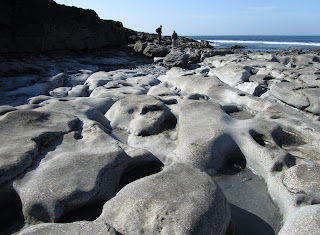 Cartographers on an eroded limestone shore
If I go for a beer with colleagues it tend to be the same bunch every time, but now I had my chance to broaden my horizon. On the first night we arrived so late I decided not to drink, and on the second night I had emergency phone duty, so I had to stay sober to be able to deal with possible emergencies. But the third night nothing stopped me. And there was a nice local pub around the corner, with locally brewed beer! And some of the people I had never enjoyed a pint with were there. Fieldwork, good for colleague bonding! 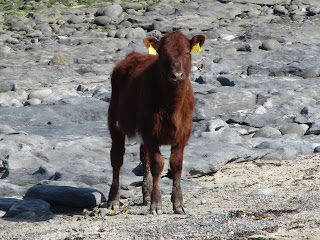 Defiant calf on the spit
As the sea level project is one of the shorter projects, Marta and I would even have time for a pre-dinner beer in the sun on the staff-lead days. Luxury! 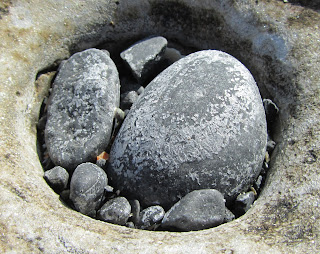 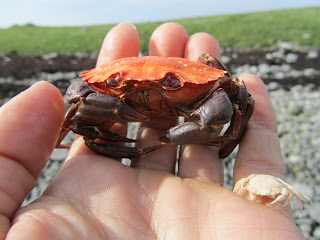 Colourful yet deceased beach dwellers
Of course there wasn't only staff; there were also more than a hundred students. And it is all about them. I knew my student-lead groups a bit, but beside that they were all complete strangers to me. But they were a good bunch! During the walks on the first days, Ian lead the front while I brought up the back, so they were my company. And it's nice to get to know them! I might see some of them again. During Roland's sea level module, for instance. And one even wanted to become a member of the caving club! 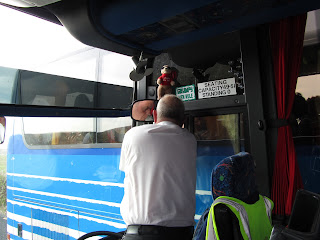 The coach driver trying to save his wing mirror, after another coach driver has decided the road actually is wide enough for both... 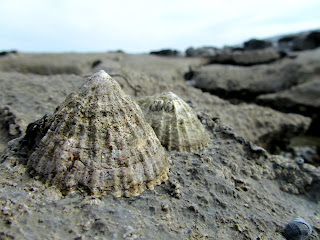 Tenacious denizens of the intertidal realm
On the last day we went to the pub with a bunch of staff. We expected the students to make an appearance any time as well, but none showed up. Were they still working? Had they gone to bed? Or would they be partying in the hotel bar? Chris suspected the last. He figured there would be a last night disco. And he didn't want to miss it! So at ~10.30 he dragged us all out of the pub and back to the hotel. And indeed, the students were in the hotel bar, and there was a DJ, but the dance floor was empty.
We just came in for a pint, but Chris started to shake his stuff, and the students seemed to also have reached the point where they dare show off their moves. So soon the dance floor was festooned with a handful of pioneering characters. And it was contagious! Quite soon the whole floor was heaving with sweaty people, staff and students alike. Either Travolta'ing away, or sentimentally belting along with the likes of Robbie Williams. It was good! And it isn't good for the voice, and going to bed after 2AM isn't good for one's general health, but I think it helps make us a school, and not two clumps of individuals. 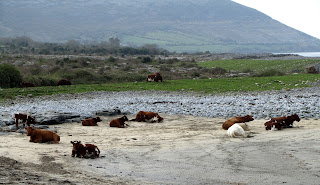 Cows taking it easy on the beach
I don't know if I'll be going again next year, but I must say, I actually hope I will! It was very useful and a lot of fun. Two of the 14 will surely not come back next year as they will be moving away, so the school might very well be quite happy to accommodate me... 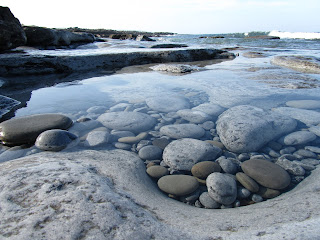