Marl caves eat your heart out

Before I came to the UK I had never heard of caving. Or of mine exploration by means of leisure. I had accidentally done some, though; years ago, I had visited what is colloquially known as the Valkenburg Marl Caves a few times. They are technically chalk mines; the rock, which isn’t marl, was mined underground for building purposes. Not quite sure why they didn’t use open cast mining, but I’m happy they didn’t; the resulting labyrinth is absolutely mesmerising.

I have now found their English older brother: the Box Freestone mine! While in Norfolk I got a phone call; whether I was interested to bugger off to Bath shortly after having returned from fieldwork, and visit some limestone caves there. The entire Cornish caving club would go, which would mean getting up ridiculously early, going underground, driving all the way back, and being home late. If they unanimously considered it worth it, it had to be good. So I said yes.


When we approached Bath it became quite clear what that mine was all about; most buildings are constructed with some featureless, though decorative, pale yellowish material. Bath stone! And we were on our way to its provenance. 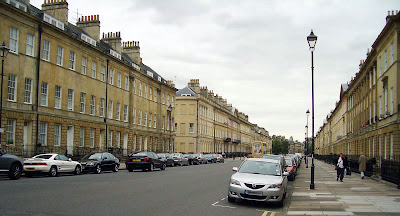 And it was worth it indeed! For those who have been in their continental counterpart: picture these, but with slightly more brittle rock, so more fractured ceilings, and more water dripping down, and with a plethora of mining equipment still in place. Many tunnels still had rails, and soot on the ceiling from the steam trains that had laboured there, back in the days. Furthermore you could hardly walk a meter without bumping into another crane! We also found barrels, carts, and endless supplies of smaller implements. The enormous saws that had been used to cut out the rock were very rusty now, but they still worked. And we found so many files used for keeping the saws sharp one of the Cornish remarked he could easily start his own underground second-hand file shop there. Maybe an idea for Dragon’s Den? 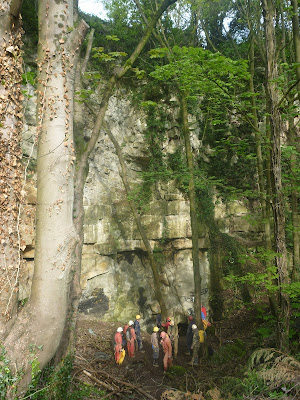 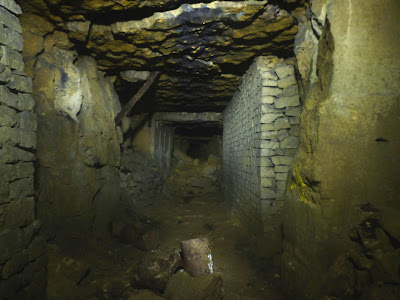 This is what is generally looks like! Notice the soot trail on the ceiling.


We had a local guide; we had to, as it is a veritable labyrinth, and the chance of coming out alive without him would probably be slim. But we must have been kind enough to him, for he brought us safely out again. And not only that; he lead us past several strange highlights.

One of these was what they call “the robots”; it’s a room where many bricks were found, and generations of cavers have built crude statues with these. Quite unusual! 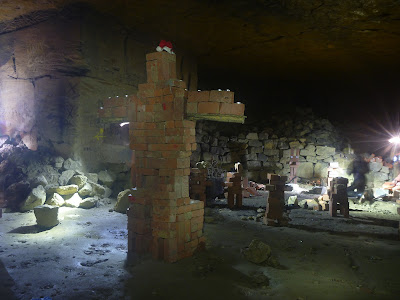 Another highlight was a quite bleak one. Some may think an abandoned mine is quite bleak in its own right, but even they would have to admit there are gradations; somewhere in the mine there was an entrance to a tunnel dug by the military. You can immediately tell the difference; it’s bigger, more regular, and quite imposing. This tunnel leads to a red door. It’s locked; what’s behind it is still military terrain, and not accessible. A whole underground city is hidden there. It was built during the cold war; it was supposed to be able to accommodate the entire government and whatnot. Makes the mind reel! 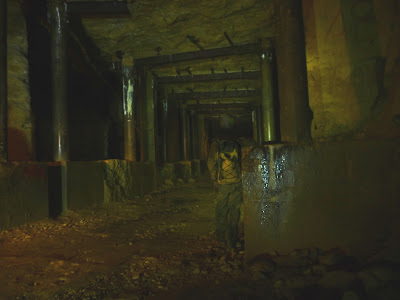 The military tunnel, with me for scale 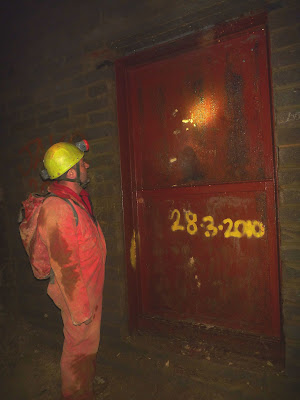 The red door to the military underground city

And what I thought was THE highlight: “the Cathedral”. It’s a chamber in the mine of truly cathedral dimensions, with an open shaft in the ceiling, which lets in some heavenly light. You really don’t know what you see when you walk in there. The photographers went bonkers there. How do you get the whole cathedral on your picture? We were also ogling the shaft - to come down there! Imagine the views. 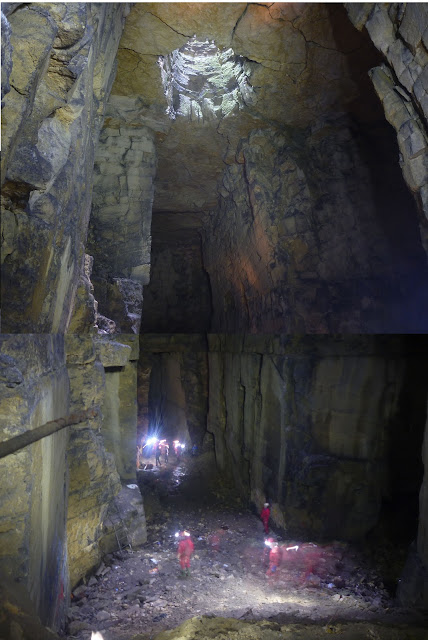 A not very succesful combined photo of the cathedral, but even like this you can see how majestic it is!

I tried a new photography trick down there as well. I quite often take pictures with 15 sec exposure time. That is hard with 20 people with lights on their helmets around! So now I went manual-ish; I just opened the shutter, and as soon as I figured enough light would have entered the lens I just put my hand over it for the remainder of the 15 seconds. I got quite some pictures with overexposure (after all) or phantoms walking through it, but sometimes it worked out quite well! One keeps learning. 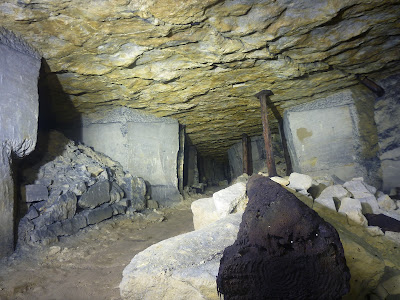 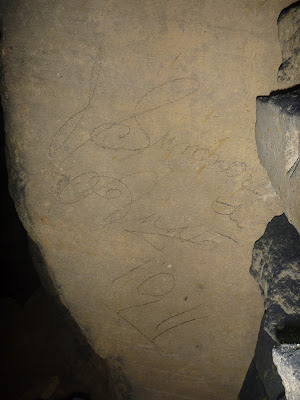 Graffiti from when people still had beautiful handwriting 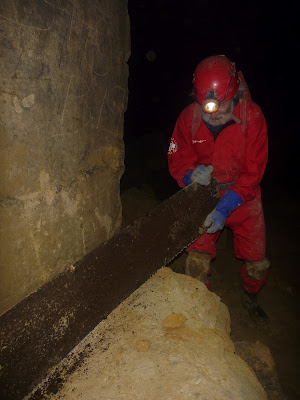 Hugh tries one of the saws 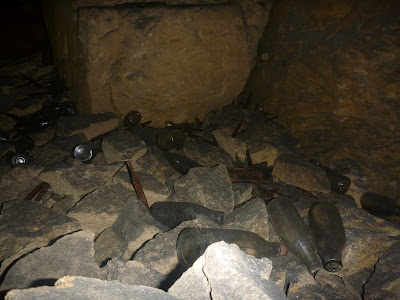 What could turn out as "Nick's second-hand file shop"; he can sell bottles too! 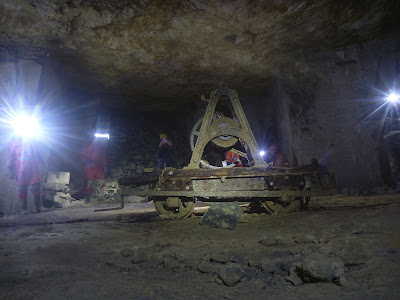 Some railway cart that was just left 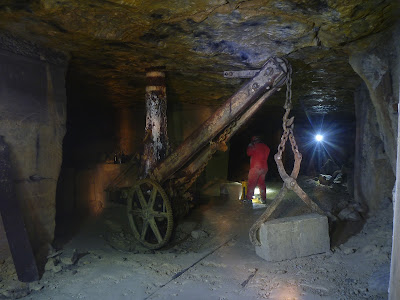 One of the very many cranes; this specimen was in better than average nick