The Ireland fieldwork, of which I already described the first two days, is organised such that the students are initially taken by the hand, but then gradually released into the landscape to geographically fend for themselves. The first two days we take them on walks and coach tours; then the next two days we have them do small projects we have desigend for them; and then the last two days we have them do projects that we have outlined, but which they have to give shape themselves. So after my two days of Burren walking I would spend two days by taking a group of students to a lake, and have them do sea level reconstruction with its sediments. Roland had cooked up this exercise, and I now had to make it my own.

Roland takes the students to some parking lot at the seaside, makes them observe the sea, and then lets them walk to the lake in question. The coach driver offered to drop us off at the lake itself; I figured the loss of a sea view would be more than compensated by the loss of a walk along this winding and shoulderless road. The next day I would just tell the students to observe the sea from the coach. Roland had not made this choice, but this year the project was mine! And I even had a charming assistant: Marta, who had joined the field trip as a back-up for one of the staff members who had done his back in. If he would do that again and would have to stay in bed she'd take over. But his back held, and she came with me! Marta likes coring. 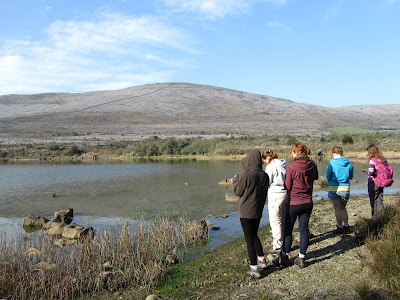 The students sketching the lake, with a beautiful Burren hill in the background
Another change I had made was that Roland talks the students through the theory the night before they go into the field. He finds a space in the hotel and makes the students show up after dinner. I decided against; I figured we should make the most of the good weather, and I wanted to do the pitch in the field. I sat them down on the grass and used an A4 writing block as a flip chart. It seemed to work! And after I did that the first time I asked the students if they agreed this was better; fortunately they did, so that change was implemented the second day too.

What I did was tell the students that Irish sea level over the last, say, 15.000 years had been dominated by a combination of vertical land movement due to the the burden of the British Ice sheet and its removal as the ice melted away; and the changes in ocean volume due to ice melt there and everywhere else. Near the ice sheet, in the northeast, the former was dominant, and in the southwest, which would have been furthest away from the ice, the latter was dominant. So in the northeast you would have had a relative sea level drop, while in the southwest you would have had a sea level rise. And we were in between. What would sea level have done here?

They figured, as planned, that if sea level had been considerable higher here we should find marine sediments in our lake. And they didn't have to think long about how you diagnose that: you just check for forams! They need salt water to survive, so if they're there the lake has to have been salty. So I made them make a nice field sketch of the lake and then we set out coring.

Roland just picks one student and cores with him or her; I thought it would be nice to have several pairs of students core, and then pick the best core to take home. So I took the narrow barrel and showed them where to core and how it's done, and then sent students in with the broad barrel (they worked in pairs, so they had more weight to get a broad barrel down!). The first pair immediately came back with a beautiful core. And nobody managed to do better! But the students had fun getting their hands dirty, and they saw that coring is a matter of trial and error. 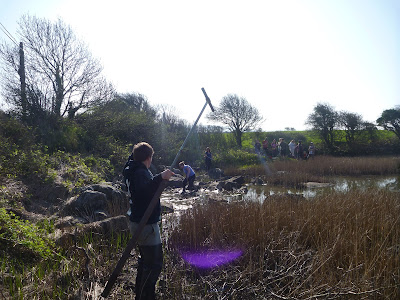 The wader-clad students get the corer to the right spot 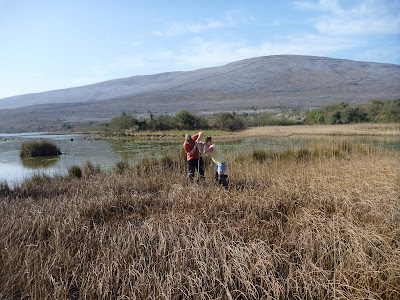 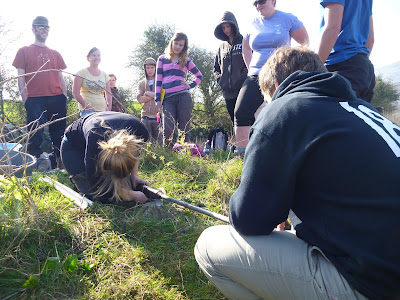 And the less spectacular task: prying the core out of the barrel
We had them document the cores, pick the best, label and pack it, and then basically we were done as far as the field was concerned. We had lunch in the sun, and then we headed back tot the lab to see if indeed our core would yield forams. Exciting!

The technicians had set up a field lab in a hall in what was calles the 'Spa centre' down the road. A lot of work goes into it! It contained a kit storage, from which every day the kit was distributed, and a computer lab, with laptops, a printer, and even a stereoscope, and an actual lab, with who knows what sort of instrumentation. It had one table ready for me, where we would sub-sample our core, sieve the samples, put them in sample slides and then take them to the microscope tables for analysis. 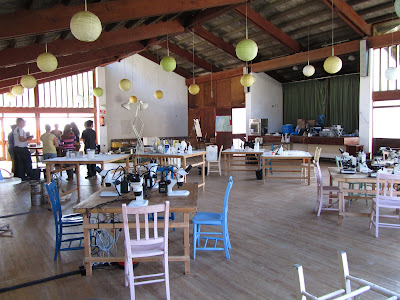 The field lab! Microscope tables in the foreground, and in the background my students unpacking the core. 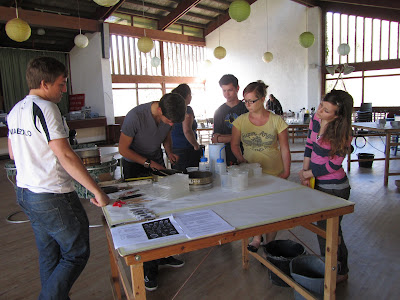 The table that had been prepared for me, with sieves and beakers and pictures of forams and whatnot. And students taking subsamples.
The students had never done something like that before, so many struggled to even focus their microscope on their sample. And most put way too much sample in their slide. And you can tell them and tell them and tell them, but some will just persist. That way you don't see a thing, and they had themselves with it; I had offered a pint for those who find a foram first. That, of course, was another idea from Roland.

Quite often I was called to a microscope because they had seen something they they thought might be a foram. It generally was a snail egg or an insect head or a seed. I offered them to go through their samples for a few minutes to see if they perhaps were just overlooking them. And that way I found the first foram. And the second. And the third. But strangely enough, even after having seen them as they appear in their view, and knowing their samples did contain them, they found none. None! I kept the pint. But I was puzzled. Roland never gets such results! I cored in the same place. There clearly were forams in the sediment. Why could he get the students to find them while I could not? Is he more inspiring? Is he more intimidating? I don't know. But after hours of not finding anything I had the students pack up. No further pedagogical use in having them ogle mud any longer!

Outside in the sun I had them evaluate at what level we had found the forams, and what that meant for our hypothesis. And what else it meant; there, of course, was a twist in the story. They seemed not to be too disappointed at the outcome of the project! And at least they were now done so early they had time for a pre-dinner pint. There should be time to relax too!

The next day I did the same thing, but this time with 22 students instead of 12. That's a lot! In the field I split them up; half could do the sketch while the other half was coring. And then I made them switch. And besides the fact that with 22 students you are actually obliged to have at least two members of staff there, I was even more glad I had Marta; with so many students you really need someone else who knows their stuff. Again the first pair of students got the best core.

In the lab it was harder than before to keep them busy; the first day already we had more students than microscopes. And with 10 students more this became worse. I made them pair up; one could ogle the mud while the other had their field sketch evaluated by Marta. And then the other way around. 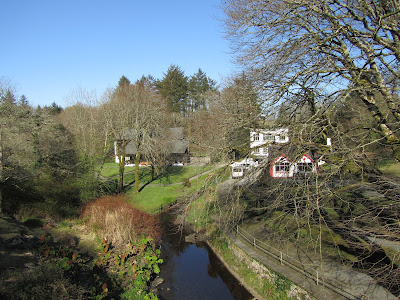 The Spa centre. The building on the left is the one that houses the labs.
Again it was me who found the first foram. Quite a beauty! But later the students called me; they had found something too... and to my very pleasant surprise they indeed had found a foram! A small, inconspicuous, somewhat ugly one! These are the hardest to find, of course, but they had done it. Kudos!

The rest of the exercise went similar to the day before; after some hours I called it a day. Quite well-timed, by coicidence; at that very moment another group came in, which wanted to use these same microscopes for looking at charcoal.

The evaluation of the results in the sun got quite interesting; I had a student in this group who has a sharp brain that fires lots of good ideas, but who lacks the dull tenacity to sit down and do the groundwork of scientifically testing these. Upon seeing the lake he had immediately figured the twist in the story out. But he had done nothing to verify his thoughts. He easily could have! I hope he will one day consider that worth the effort. And perhaps I have put these studetns off micropalaeontology forever. But then again; they won't have an unrealistically glamorous idea of it. They have now felt it takes stamina and stubbornness to get the job done! Maybe some will have just that, and do some more of this kind of work during their time at university!
Posted by Margot at 20:09