Field excursions are supposed to provide a steep learning curve. When the 2nd year students had done two one-day projects in Ireland  they were deemed ready to do a project themselves. We had presented outlines of possible projects to them back in Plymouth, and after having chosen one they had to present us a project proposal. I had offered two of Gerd's old projects, and each was chosen by a small group.

One project dealt with a spit; a tongue-shaped body of sediments protruding from the coast into the sea. The students had to assess if this specific spit merited protection as a Geological Review Site (GRS); these are supposed to 'make a special contribution to our understanding and appreciation of Earth science and the geological history of Britain'. I don't think they have these in Ireland, which is part of the British Isles but not of Britain, but my students kindly did not pick up on that. And in order to asssess that they, of course, have to understand the geological history of that very spit themselves. 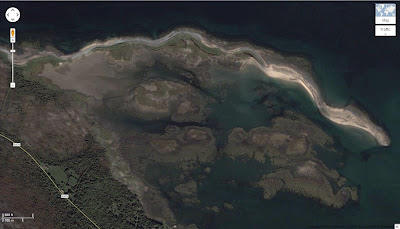 The spit as seen on Google Maps

The other group were faced with large boulders (megaclasts) on a beach; how did these get there? Can a simple storm transport such enormous masses? Or do you need a tsunami for that? Do they move from year to year? Does that fit with the wave data that's available? The year before students had surveyed in 60 of the boulders, and this year the students could see if they had moved since, and what the geographical implications for such movement or absence of it would be. 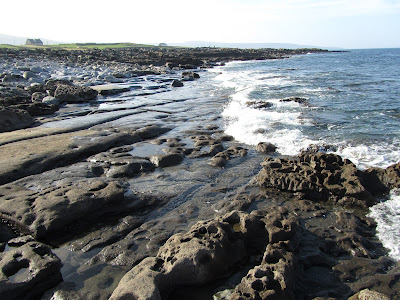 The beach with the megaclasts

The project proposals showed these 2nd year students are not yet seasoned scientists; there was quite some feedback to give to get them ready for the fieldwork. I threw more of that at them than they may have liked, several times, and hoped for the best. It's student lead, after all! And both groups claimed they were ready before departure. We would see. You always hope "your" students will do well!

The students would have two days to spend in the field and/or in the labs, and on the third day they would have to present us with the results. So on day one I went into the field with my megaclast students; they relied heavily on technology, and I wanted to see that they got working alright. And they whipped out these GPS's, and started finding these boulders again! They got cracking. They had the position of the boulders, and pictures of each; once you found the location of where a boulder had been the year before you got the picture out, and looked for that very boulder. It may have moved, after all! And they did well. All found boulders were marked with wax crayons and then surveyed in precisely. 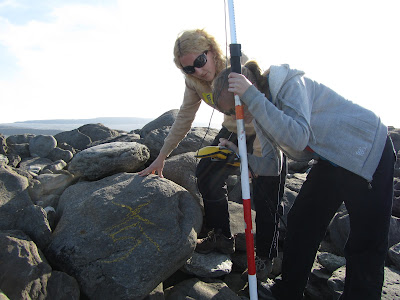 Boulder 51 is found!
While they were productively running around on the beach the cartographers appeared. They had set up the GPS base station you need to get high precision, and now they came to get me. We would have lunch together, and then they would drop me off at my spit. Splendid logistics! 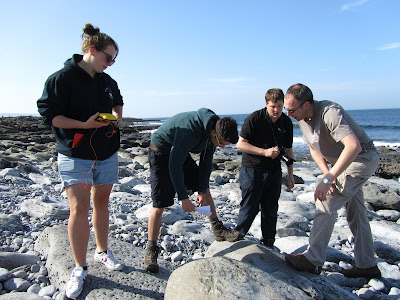 So which boulder is it?
When I found my spit people they were measuring fanatically. They were taking transects of the spit every 100m, and logged the profile of the spit, and the size of the boulders and cobbles, and they took samples of the finer material. Unfortunately, they were only at transect 7; the spit was 2km long, and it was already 2PM... at 4.45PM they would get picked up by the coach. So they quickly changed their transect spacing to one every 200m. 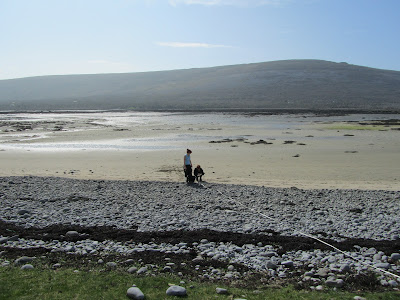 They were tired when they came out of the field. They had worked hard! I was looking forward to hearing how they had gotten along. After dinner they would give me an update. And the megaclast people too.

The group working on the spit, which had spent most of the day with their eyes cast down to it, basically got the advice to also look sideways. To understand such a structure you have to see the context too! And the other group had received bad news; the setting up of the base station had gone wrong, and the high precision needed for their project had not been obtained. So they had to re-measure every single boulder the next day! That was quite a disappointing message, but they took it in good spirits. They were going to measure like mad the next day!

So the next day came. The boulder people would be picked up from the field later than initially planned in order to give them time for all these extra measurements. I would help the cartographers to set up the base station; this time it had to be done right. And then I would go and see my spit people again, to see how they would get on with seeing their spit in its surroundings. 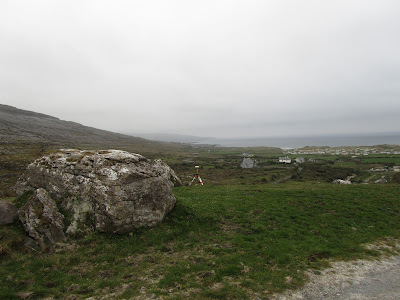 The base station of the GPS
I found the four students on the spit, this time well wrapped in GoreTex. They had left their two mates in the lab to process the samples they took the day before. I walked along with them for a while, trying to guide their eyes sideways. But the 6 were apparently more than the sum of 4 and 2, and after consulting their lab-based colleagues, the four in the field decided to see if they could be picked up a bit earlier. They had lots of data, gathered on the first day; they figured they should rather have time to interrogate that, than create more, but run out of time making sense of it. 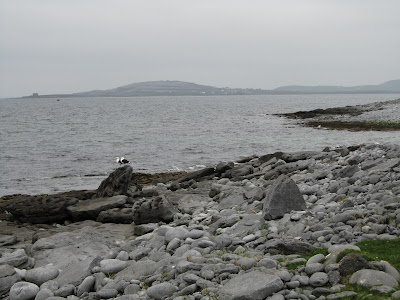 The last field day was less sunny
They heard there was a coach about 5km away from them; if they could walk there they could hitch a ride. So they did, and I walked along. The coach was parked at the pub where I had had lunch the day before; this day I did the same. I found five staff members there already. I enjoyed a glamorous crab lunch before Ralph gave me a ride home. Along the way we would pick up a group of his students. They came out of the field loudly proclaiming their love for peat, which they had been coring that day. An enthusiastic bunch! 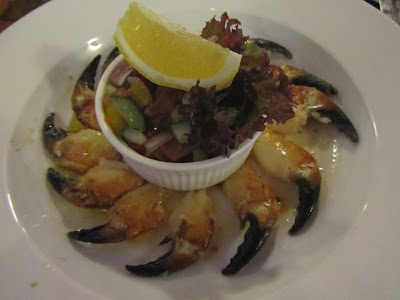 My glamorous lunch
When the megaclast bunch arrived I hung around to see their data being transferred; both in my function as their supervisor, and as one of those reponsible for the set-up, I was quite eager to see that done. And the data came out! Not perfectly; there still had been a glitch somewhere. But that was something they could correct for later. They could now go and compare with the data of last year...

After dinner the whole hotel lobby was littered with groups of students preparing their presentations for the next morning. Including mine. But they seemed to not have anything to run past me, so after a few hours I joined a contingent of staff going to the pub for a last evening pint. The next day we would see what the students had come up with! 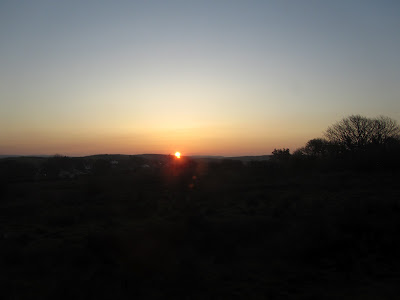 Early morning in Lisdoonvarna, seen from my hotel room
And the next day came; as it would take way too long to have all groups present in succession they were distributed over 5 locations, with 2 staff members to assess their presentation; I would get to see my megaclast students but not the spit people. I had only seen the outline of their talk. But of both, of course, I will see the reports. I really look forward to these. I hope both manage to make the most of their data! For neither group the work is over. Nor for me. I'll have quite some marking to do!
Posted by Margot at 19:14