We had completed the first part of the USA fieldwork, and now we drove through the scenic landscape from Bangor in Maine to Augusta. We were back to three brave scholars; our companion in Maine: Mark, had left. And we would drive down from the emptiness of Maine to, well, what would turn out to be the emptiness of Connecticut.

In Augusta we knew there would be a courier, and we hoped to send the fruits of our work to Europe, which would save us travelling with unthinkably heavy luggage. We did find the courier, but were a bit taken aback by the price which was 3 times more than we had expected. We did manage to get lunch, and then the trip continued to our motel. It was another soulless one, on a soulless strip, but what can one do. We unloaded, and then went on a trowel-hunt. The hardware shop turned out to also sell rubber boats! These may come in handy, as the bloke whose field site we would use had warned us (a bit later than would have been optimally practical, though) that it could only reasonably be reached by boat.

Having trowels we went for dinner, where the level of the discussion dropped somewhat, but after dinner we got our act together and did serious stuff such as renting a car for the trip back to Bangor. Roland would drive back to Toronto from Groton, where we stayed, so Tasha and I would otherwise have to walk with all the kit.

The next morning we would go into Mystic, a much nicer town than Groton on the way to the marsh, and there have breakfast and buy a map, and then go try our marsh. All possible map selling points would not open at any reasonable time, so we only managed the breakfast in some left wing deli. They also sold sandwiches for lunch. So we just went to the marsh like that. We took surface sampling kit, recce coring equipment, and surveying kit. And off we were. We encountered some helpful ecologists on the way, who helped us a bit with plant taxonomy, and easily found the place where we would have to leave the path. And there it got tricky. The water was very high! I could get about in my waders, but even I had to look out for ditches. We decided to go back, and first install the pressure transducer near where the car was parked. And then it was already lunchtime. So there we were, three sea level scientists (one of them most eminent!) caught by the tide, having a sandwich on the jetty. That was the second time we had to wait it out. ("What an idiots!") 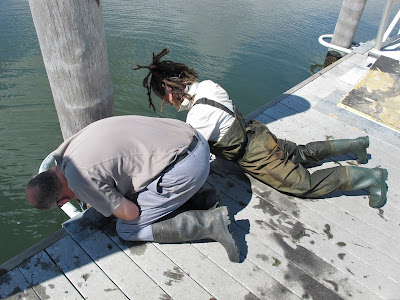 Putting the pressure transducer into place. The water was to deep to do that from the water! And notice it isn't weather for such garment... pic by Tasha 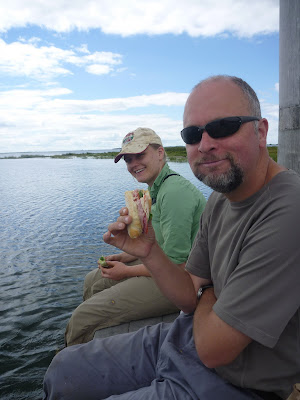 Sitting on the dock of a bay...
After a while we had another try at reaching the site, but the ditches we knew we would encounter turned out to be a bitch. We had to add another tide-waiting break. Tasha decided this was the most relaxing fieldwork she’d ever done, and that Antony had something to answer for. But on second thought; maybe Antony would have checked the tide beforehand... he’d laugh his head off upon hearing this. Funnily enough, we seemed to have picked this time window on his request. We could have come later in the year, when the tides were lower. And now Antony hadn’t come along... 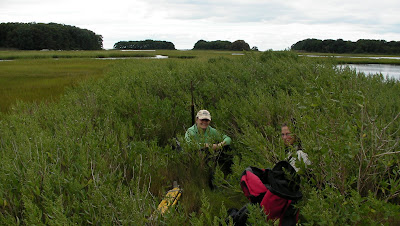 Wait #2; pic by Roland
After wait #2 we gave it another try. But the ditches were just too much. Too deep even for waders! And for science’s sake you might choose to just get wet and get on with it, but that would have resulted in two pairs of wellies stuck in a ditch... we decided against. We would need a boat for this. We came up with plan B. We didn’t really need our site to be that near to the site of our American colleagues. They had different needs from us. We might just pick a more accessible part of the marsh... so we reccied the rest of the marsh, and decided on some other stretch. And by that time we were knackered. We hadn’t gotten any mud, but we had been walking for hours in the heat carrying all that equipment. I had been wearing waders, which meant I had the wettest trousers. I was soaked with sweat. I smelled worse than a caver. We decided to do the sampling the next day. 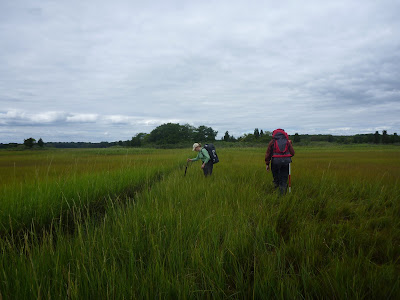 An innocuous-looking, but tricky ditch
On the way back we visited the memorial plaque for Orson; Roland’s old supervisor, and my old guardian angel. Good old Orson. The plaque says a lot. It doesn’t mention, though, that he was a lovely man, but he was. 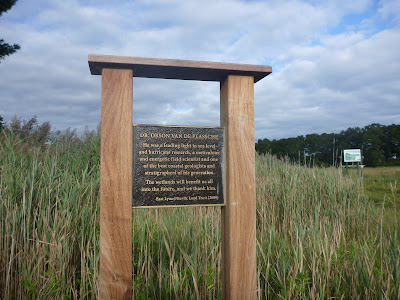 I hoped to get my trousers (and more) washed in the motel, but their washing machine was broken, so we just went for dinner. Roland took the opportunity to sing obscene Christmas songs to his lady companions. And before one gets the wrong idea about Roland: that was on specific request. And before one gets the wrong idea about me: it was Tasha’s request. And after this jolly evening it was an early night. We didn’t want to be stranded by high tide again, so we wanted to be in the marsh at daybreak.

At 5.45 Roland came up to our room for breakfast, and shortly after 6 we were on the move. We rocked! We found a good spot for the surface transect, and got moving. We nailed that fast! So we had all surface sampling done before the tide came back. When it did we went back to the car, and set up the GPS. We left Tasha with it, and went to the Laundromat with my still repulsive trousers. And much more. Waiting for the laundry to be clean and dry we just sat on the porch like to Louisiana pensioners and contemplated life (and did some more plant taxonomy; maybe less typical). Then we had to do some more of that back with the GPS. We were positively frying in the blazing sun, but there was no shade anywhere near the GPS. 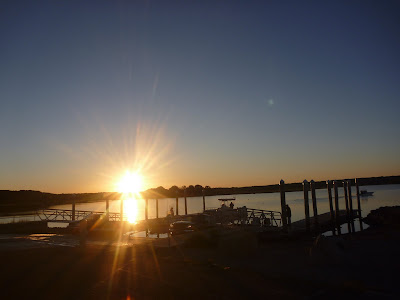 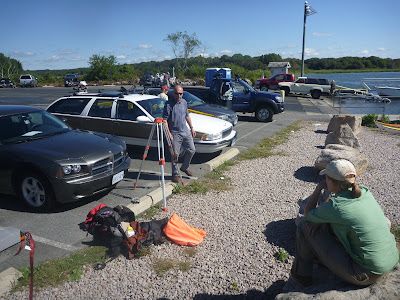 Setting up the GPS in the heat, on the parking lot. The next day there would be a massive SUV parked over that spot... 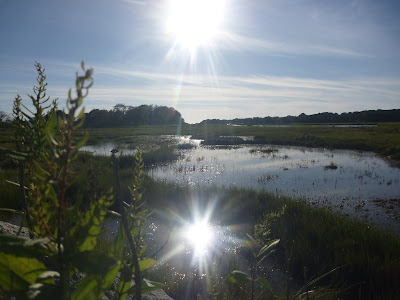 It certainly was a beautiful marsh!
We got ourselves together for the second part of the field day: stratigraphy. We cored our surface transect, but weren’t too sure if it would do, so we then cored the rest of the marsh too. That was even worse, so we settled for the original transect. When that was done I GPS’d it while Roland surveyed in our benchmark at the parking lot all the way to the marsh, and then it was a wrap! We could do the routine again of showering and going for dinner. This time we picked a rib restaurant on the other side of the road. I felt thoroughly European when we took minutes to figure out how to cross over safely. The restaurant was excellent: lots of local microbrewery beers, lovely personnel, and good food. Tasha attacked the beer like someone whose fieldwork is over, and even went out to buy another sixpack, of which we merrily drank another half in the motel. 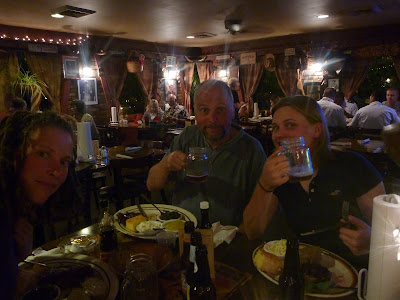 The next morning we got up at 5.30 again. We had another breakfast in Tasha’s and my room, and were off. We went back to our transect and started coring. The first core came out broken. The second was quite OK. At some point I took one out, and it was perfect. That resulted in a proper rant by Roland, who had been quite out of coring shape these days, which annoyed him; he could be heard uttering things as "I've been out-gizmoed by a novice! These f%£@# bi#*$!" Always lovely to get the appreciation of your professor when you do a good job. We love this man. 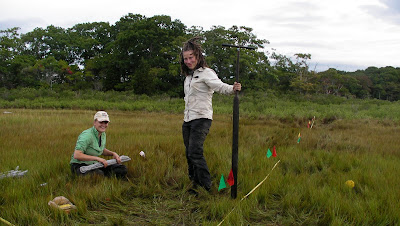 Me looking triumphant with the core barrel I worked so well with that morning. Pic by Roland
He then taped the taking of another core, which was also perfect. Maybe generations of Plymouth geography students will be shown that one... we also made a small movie with Roland doing very vulgar things with a core we didn’t need. And then he had his revenge by taking out another perfect core on his own. Pride restored! And only shortly after 8 in the morning we were done.

We did the core wrapping on the parking lot, guarding the GPS (again!), answering all the questions from the local fishing enthusiasts that had come flocking to this boat landing. I also did some lying underneath a car as it had been parked over our benchmark, but luckily nobody asked about that. 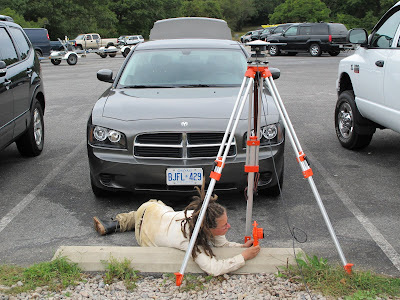 Alternative surveying. Pic by Tasha
When the GPS had run for 3 hours we could call it an almost-wrap. We would pick up the pressure transducers as late as possible, being the day after, but except for that it was done! I’d have lots and lots of work in the lab later, but here in the USA we could go and have fun. Almost. We went back into Mystic to try and buy a bag for the cores, and some other last-minute necessities, and then we went to the hotel, for a shower, a beer, and what turned out to be lots of nerding. Roland started plotting stratigraphic transects, Tasha looked online for accommodation for the coming days, I preserved my sampled plants, and in the meanwhile we exchanged gigabytes of pictures. It was an empty stomach that drove us out of that hotel room... 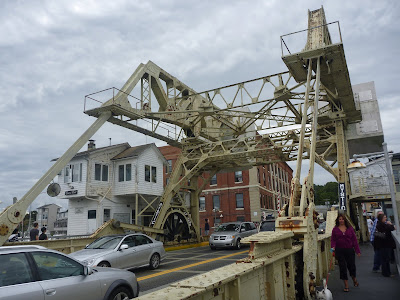 The drawbridge in Mystic
We went back to the same place as the night before, but the nights of bad sleep and morning of 5.30 awakening had taken their toll. We decided to call the previous, festive night the last night, and take it easy this one. The next morning we forced all our stuff into the car with difficulty, retrieved the pressure transducer, and drove to the car rental place where our roads would separate. Tasha and I forced all our stuff into our rental car, and then it was time to take a last band picture, give Roland a big hug and wish him a good trip, and drive off. This was the real end of the fieldwork. It had been a good one! And for this project it was the last... 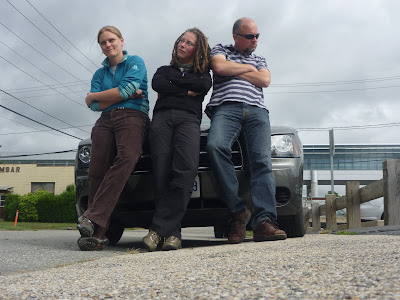 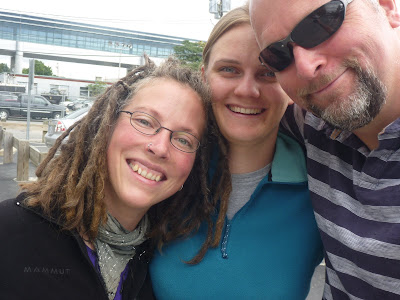