Save the virtuous lady

Once, there was a virtuous lady. Her beauty was renowned! So much so, that people came from far and away to violate her. When the king heard of this, he decided this should come to an end. He was recovering from injury, so he could not ride out and save her himself. But he had a legion of heroes at his command, and he called upon a man of special skill, named Batman, to take this noble task upon his shoulders. Batman was given the aid of a handful of helpers, and together they travelled on a sunny day to the realm of beauty and destruction to make this world a better place.
What did Batman and his sidekicks plan to do? The idea was to construct a robust chastity belt, so the lady would remain unmolested. The lady, however, was of impressive size, so doing this would be a gargantuan task. The start of this project would be to make a template in malleable material, carry that back to a blacksmith, let him make the final product, and then go back to fit it on the lady. And we would get the key, of course.

Did I say we? I did! This story is a tale from the here and now. So told in less grandiloquent tone, what is it about? Must be some underground space involved, wouldn’t there... and yes there is.

Virtuous Lady mine was renowned for its pretty crystals. Mineral hunters would trespass over the farm on which land the entrance is, and nick the minerals. And they would stop at nothing to get more. They had even been using explosives, this to the displeasure of the family living right above it. So the house owner and the Devon and Cornwall Underground Council decided to close it off with a gate. So one day I got an email from a gentleman called King, which had gone out to the Southwest caving community, to ask who could help with this. He was recovering from surgery and had to take it easy himself.

For some reason or other, it ended up being me who organised things. Maybe because I’m an eager rookie. Anyway. I’d never even been there, so I needed veterans to help me out, if only for finding the actual mine entrance. The guy who would know what the plan was was one of our Daves, generally known as the Batman, as he is a bat conservationist. Lionel, Rupert and another Dave would help out too.

I bought two slabs of hardboard of eight by four foot; this would serve as the malleable material. I thought I’d just lay them on my roof rack, strap them down, and drive away. That was naive. The eight foot long floppy sheets neatly draped themselves over my windscreen and rear window. Bugger! Luckily, I got some lengths of timber to go with the hardboard; lying on top of these the sheets stayed out of my line of sight.

On the day itself I picked up Rupert, made him help me load up the hardboard again, drove to the top of the track to the mine, picked up the other men too, saw them leave the car only tens of meters on as the track was so rough the car hardly could make it while empty, parked like a woman, and then we could start. 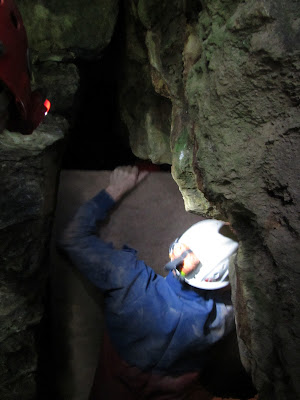 Dave fitting the hardboard sheet in the entrance; there's another Dave on the other side of the hardboard...
We carried the hardboard down and started on the furthest entrance. The Daves were on fire. We made an amazing template with a door in place, using the timber. The non-Daves had no idea what other entrance we would tackle, so we had a relaxed time, sometimes handing drills or screws or sawing hardboard, but mostly just enjoying the scenery and discussing politics. 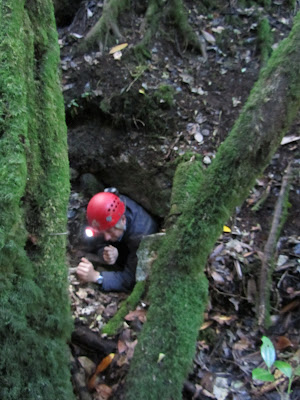 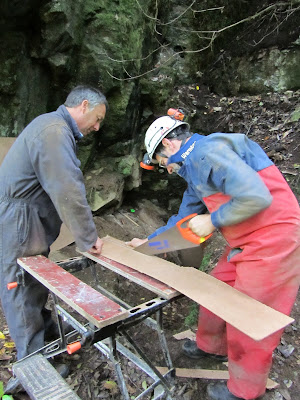 When that was done we moved on to the other one. That was quite something else! Huge, and with a vertical drop. We did what we could. And fairly soon we could take the reshaped hardboard back to the car, strap it to the roof again, and sit down at the riverbank for lunch. I had had a properly domestic and caring instinct-loaded mood the day before, and baked a cake. That came in handy, as Lionel had left his lunch in his car. But we decided that being a DCUC deckhand was not a bad job at all, if it gets you having cake in the sun at the river in good company. And after lunch Dave (not the batman) and Lionel left, the first as he had been in this mine already countless many times before, and the other as he had work to do in his own garden as well. The other entrance, which was a bit more of a challenge... 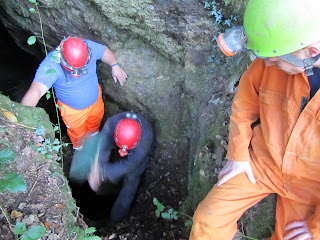 Here some violence was needed 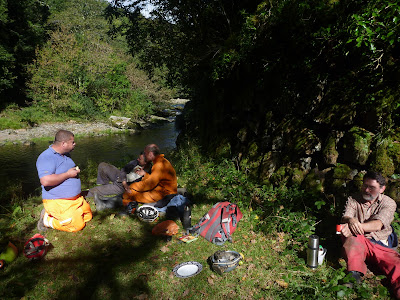 Rupert, Batman and me got our gear in place and went in. I had never been in, and Rupert not very often. And we did not see very remarkable crystals (maybe that’s why people had been resorting to dynamite), but it was a pretty mine. A confusing one, as well. Dave was not dressed to wetness, so he let Rupert and me go through a flooded passage alone. And we marvelled at the maze behind it, but it took us some puzzling before we managed to find the way back. We then went into the other entrance, which was dry, but which quickly lead to places we had already reached from the other side. On the way I also learned the difference between a greater and lesser horseshoe bat. And then we were out!
On the way back I had to be flagged of the road by Dave, who had been driving behind me, and who deemed the hardboard still had a few degrees of liberty too many. But that was quickly fixed, and then we could deliver the stuff to Dave who had volunteered for storing it, and call it a day.

Let’s hope the metalworkers involved get these gates made soon, and we can guarantee this Lady her chastity again!
Posted by Margot at 21:47