“You drive or I drive?” I of course said “you drive”. Tasha’s response was: “great; let the novice drive”. But having been offered a choice I did not feel bad about that.

We had just said goodbye to Roland. The fieldwork was over, but there were some days left, and Tasha and I would enjoy these, before returning all the borrowed kit to Maine University and flying back. And Tasha, who had had her driver’s license for only two months, and had never driven on the right side of the road before, would drive to Portland, Maine. And as I suspected, she did an excellent job. 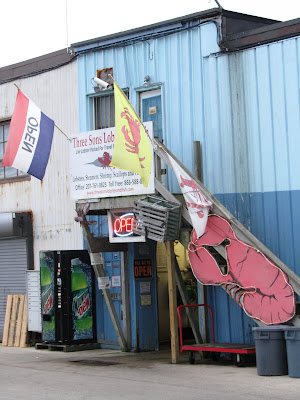 In New England (and who knows, maybe in the rest of the States too) they use Dutch flags as "open" signs... this picture was taken in Portland
Some people are born to drive, while others aren’t, and while I never really started to enjoy driving Tasha’s only issue with it was that she didn’t approve of the speed limit. And shows a profound disregard of the phenomenon handbrake.

In York village, which evidently was a tourist trap, we had lunch. We still hadn’t had Maine lobster yet, and you basically must while in the state, so we tried a lobster sandwich for lunch. Good stuff! Then the road took us to Portland, where we checked into the beautiful hotel, and went off to explore the town. 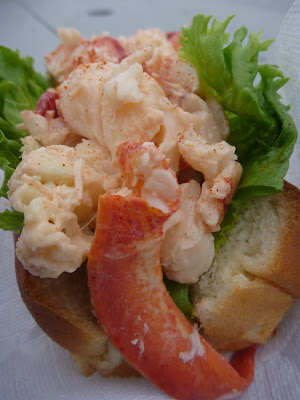 Maine lobster as an excellent sandwich! 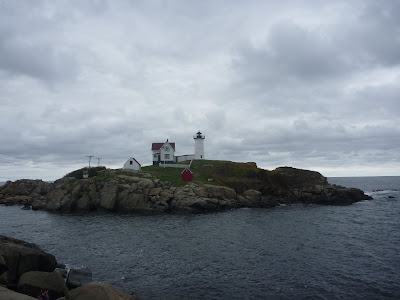 The York Village lighthouse
Portland has the name of being somewhat quirky and European-ish and left-wing, and, well, it is. I liked it! We walked the length and breadth of the peninsula that holds the city centre, admiring the grand old wooden houses, the fortress in the sea, and so many more things we got fairly hungry. So when we passed by a pizza restaurant that released enticing odours into the street air we yielded and went for it. It was the most hippie pizzeria I’d ever seen! But the food was excellent, and they had all sorts of local microbrews on the menu as well. We like. 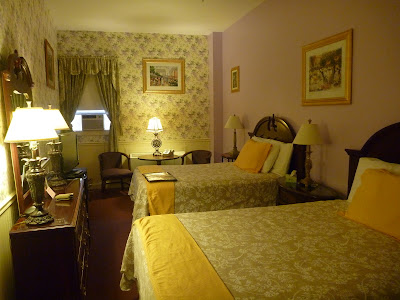 Tasha has a special talent for finding very stylish hotels for low prices
We wanted to walk past one quay that allegedly had never burnt down, quite unlike most of the rest of the city, and it didn’t look much older than the rest to me, but it was very, very scenic, in a sort of stray cat-infested, fish-smelling, dilapidated, deserted kind of way. The cameras came out. And then it was time to find a beer pub mentioned in Tasha’s Rough guide. We found it, and enjoyed excellent beers. They had more than one can possibly imagine! And almost only obscure beers. I failed to recognise most of the Dutch, Belgian and Norwegian beers, and on the other nationalities I had no chance at all. Remember the name Bavik Petrus if you like sour beer! 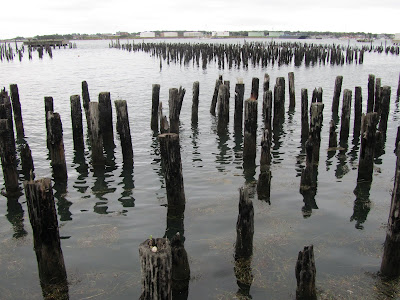 In Portland, things apparently burn down a lot. And yhey're not always restored. These were probably quays of sorts... 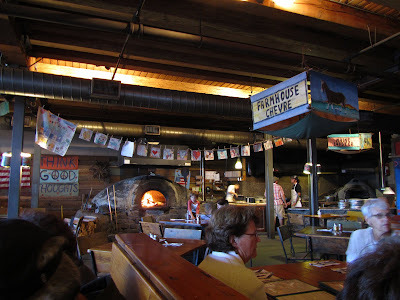 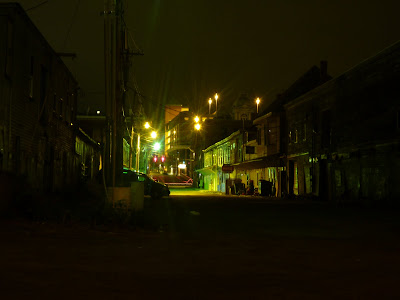 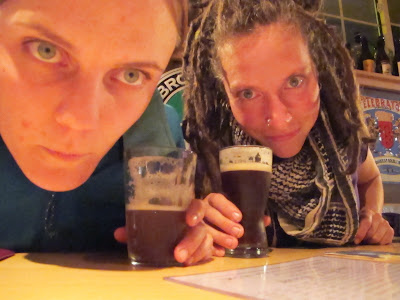 Silliness in the beer pub. Pic by Tasha
The next morning we started the day in proper geek style; way before breakfast the computers came out. Tasha had a poster to finish, and I had things to blog. But shortly after breakfast we went after all. And we pleasantly drove to Rangeley, where we would spend the next two nights. We hoped to be able to do a hike that afternoon, and then go canoeing the next day. It was fairly late, though, by the time we found a half-decent maps with some hiking trails on, and we decided on a short one. The tourist information lady said the hike up the mountain of our choice would take 1.5-2 hours, so we Europeans did it in 45 minutes. It was pretty! It would be much prettier if there wouldn’t have been all these trees there; bare rock is more beautiful, but one cannot have it all. I could hardly complain since this still counts as work! 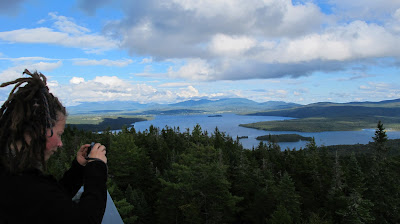 On top of Bald Mountain, that disappointingly wasn't bald! 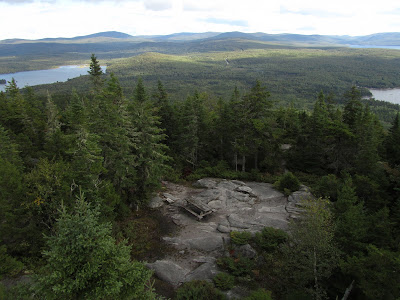 We went back down, and this time I would drive. Hadn’t done that in the States yet. Tasha took over navigation. We would first hop by at the canoe rental for information (they got us enthusiastic) and then drive back over a road that seemed to be frequented by moose. It was more of a detour than we had thought! But then it was even longer, and we became suspicious. It turned out we had missed a left turn back, and we were driving out of the world. We had been joking about being Thelma and Louise, but now we were really heading south, bound for Mexico (be it Mexico, ME). It took us hours to get back. We had initially thought to have a beer on the porch at our return, but now it was pitch dark and we were hungry, so we were off to the nearest pub where they did food. It was a proper dubious American sports bar with questionable food. In which I then forgot my camera. What a day! But upon going back to that pub it was promptly returned to me, and thus the day ended well, in spite of our respective weaknesses. And we were home early enough for me to sit in the parking lot for a while to correct an embarrassing typo in the blog, and write this!

The next day we would go canoeing. When in Rome... so we got dropped off with a canoe, and were told where to leave it. It was fun! We were going downstream, so it’s not sport, but gliding through the wilderness is great. Beside the odd evidently sawed log in the water you see no evidence of man on the way. We were sad to see the canoe-drop-off-point within two hours. 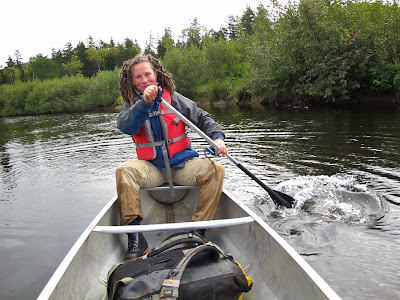 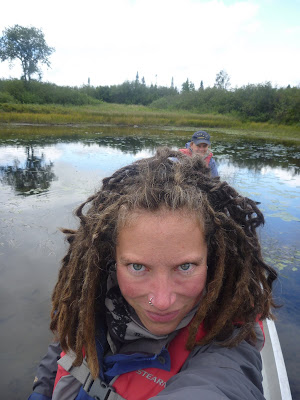 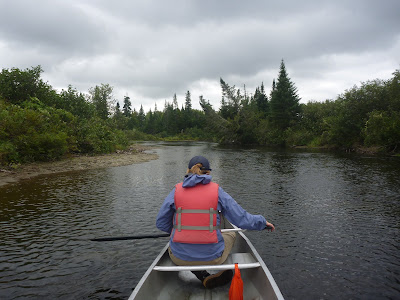 After canoeing we still had half a day left, and we wanted to hike up a mountain. We picked one, and went looking for the start of the trail. The previous trail had been excellently indicated! This one was missing. Our map said “start at the green sign...” but we saw none. I managed to convince Tasha it started at some vague logger’s road, and we gave it a try; it was a clear path, and after 1.5 to 2 hours we did indeed reach the top of the mountain of choice. From there we had an amazing view! Only to be enjoyed by those who managed to stay upright in the strong wind. We then decided to take a different route down, and we figured soon that that was the official path. When we came back to the road we found a fallen-over pole with about a centimetre of green plastic still protruding from it. Not a shame to not have found that one... and this way we got a round trip! All well. 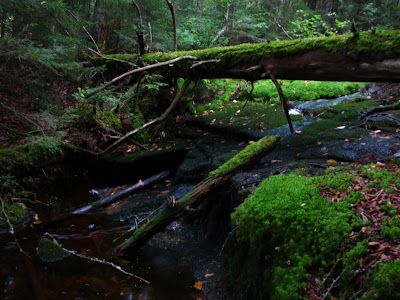 Impression of the woods through which we walked. Pic by Tasha 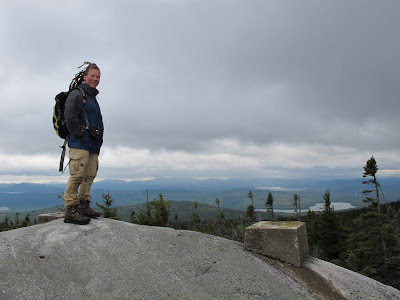 On top of Azincohos Mountain 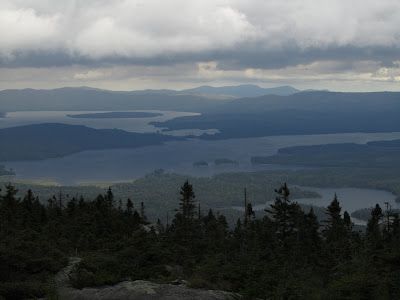 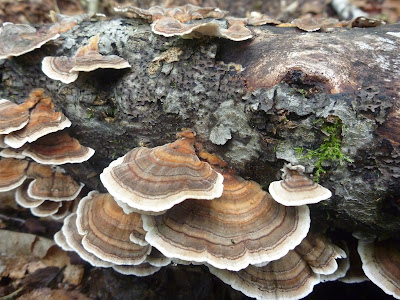 On the way back to the hotel we saw three moose on the side of the road... they were not keen on posing for a picture, but it made the Maine experience complete. Blueberries, maple syrup, lobster, canoeing and moose: check! And that list sounds quite Canadian as well but my guess is that that may not differ too much from Maine anyway. 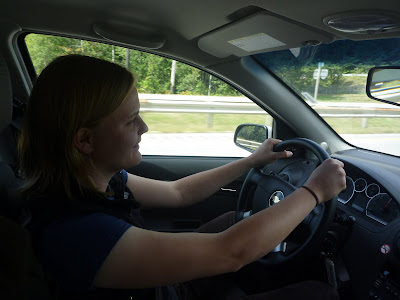 Tasha in her newfound natural habitat
We ended the day with dinner in the restaurant itself, and a port/whisky afterwards. We would probably have another second-last day posing as a last day. The actual last one we may take it easy, to be fresh for the journey back!

The journey went well, even though I wasn’t at my best navigation skills. To Bangor that resulted in a few U-turns, and in Bangor in some old-fashioned circling around the university, but we had plenty of time, and delivered the kit back into Dan’s able hands in a whiffy. We made sure we got some lunch before we got started on repacking... it’s not easy to pack 12 sediment cores of up to 1m long , and tens of surface samples, in civilian luggage. We also tried to check in online and pre-pay our bags, and then we went on a final road trip in order to deliver some desired hike food to Ian, of whom I hope he appreciates the effort...

We had another all-American sports bar dinner, and that effectively was the end of Thelma and Louise. The next day we would turn back into serious scientists again, trying to return to our respective institutes with the fruits of our labour. I'll report on that quest separately. But this encounter with Maine was good! I'm still not convinced I could feel at home here, but they sure do have empty wilderness (although with way too many trees in it) and beautiful animals and lovely people. Getting a chance to explore this was a fun bonus! We love fieldwork with Roland, even when he's buggered off to Canada...
Posted by Margot at 12:49