The trip back to Blighty after our USA fieldwork started well! Tasha and I found the airport without problems, delivered the rental car back, and checked in. But when the US airways employee gave me a hand getting my sediment-core-weighted backpack to the conveyor belt one of the shoulder straps snapped. Rats. I also had my hand luggage, and my heavy NP-bag on wheels. How was I supposed to get that thing through London Paddington if I could not wear it on my back? But that would have to be something to worry about when I got there.


First we flew to Philadelphia. I snoozed all the way until they announced the imminent landing, which coincided with a view on beautiful New Jersey (at least, I assume that’s where we met land again). And in Philly we had a hearty lunch (with sea-weed salad! Not only good, but also nicely reminiscent of salt marshes) and then a long wait. Tasha snugly descended into a podcasted image of her beloved Stephen Fry (or rather, everybody’s beloved Stephen Fry), while I read, surfed and tried to work (indeed, less glamorous, what else is new?). But the hours obediently crawled by, and it was time for the third and last goodbye of this last fieldwork. We had different flights back... 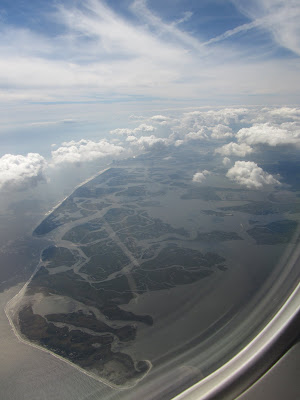 More salt marshes! And is it just me or do they look like a face?
Salman Rushdie and sleep got me over the ocean, and soon I was able to greet my luggage again, happily concluding that the other strap had held. Velvet-handed luggage handlers in Philadelphia, apparently! I trollied the ~67 kg of luggage to where I had to leave this coveted aid behind, and there engaged in emergency backpack surgery. I had wisely kept the duct tape on me! And it was soon proven that a few loops of duct tape could hold the over 34 kg of sediment the bag contained. That made life easy! 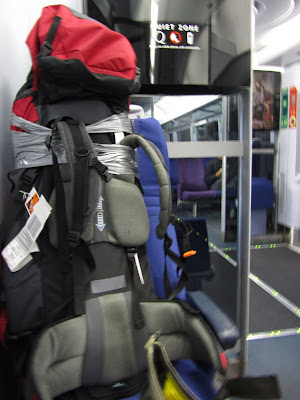 The battered-looking backpack in the fancy Heathrow express...
London Paddington gave me brunch and nice people, and the latter continued in the train. I ended up having environmental discussions with an Australian lady whose children had a talent for accidentally locking themselves up in the toilet. As you do. Plymouth showed a tougher face with moody-looking people happily letting me, humongous backpack and all, open the doors (these trains only open from the outside, so if you have to show yourself out you have to open the window, lean out, and clumsily fondle the handle) and not at all inclined to step a millimetre aside to let anyone off the train. And with this luggage weight more than my own the steep slope to the university was somewhat unpleasant as well. But minutes later I could unload our precious sediments into the cold store. Mission accomplished! That feels good.

Walking home I updated Roland, who had chosen to travel from Heathrow by car ( a choice I was glad to not have made), and soon afterwards, about 27 hours after departure from our Bangor motel, I could conclude with some relief (I have to admit I don’t live in the best of neighbourhoods) that my car was still there and my house was unburgled. That feels good too! So now I have to shake off the jetlag I undoubtedly have to a certain extent, do some bonding between my neglected bicycle and my over-fed, somewhat over-alcholocized and certainly over-airported body, and get rocking in the lab!
Posted by Margot at 21:59